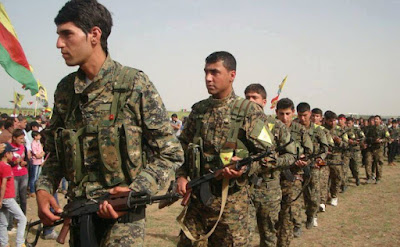 The Turkish state continues to go back and forth between Russia and the US to invade Afrin. Kurdish People’s Leader Abdullah Öcalan had seen that after the Kobanê victory, one of the Turkish state’s targets would be Afrin and said, “Today is not the day to build textile workshops, it is the day to build workshops for arms and ammunition, to create war communism and to root it in society,” warning the Afrin administration and self defense forces three years ago.

HE SAW WHERE THINGS LED

Turkish President Tayyip Erdogan said Kobanê was “about to fall” on October 7, 2014, and after Kobanê achieved victory against ISIS gangs on January 27, 2015, the HDP surpassed the election threshold on June 7, 2015 and prevented the AKP from forming a government on its own. And on June 15, 2015, YPG/YPJ fighters and the Burqan Al Firat forces that form the core of the Syrian Democratic Forces today liberated Girê Spî, after which the Turkish state flipped the table in Imrali for a solution.

The “red line” in the Imrali meetings was Rojava, and Öcalan saw the threats against it and repeated frequently his warnings from before. Öcalan saw the threat against Afrin and shared his concerns with the PKK prisoners who had been transferred to the Imrali Prison to be part of the secretariat to be formed during the “solution process”.

With the solution table being flipped, by early 2016 the PKK prisoners Çetin Arkas and Nasrullah Kuran were exiled to the Silivri Prison from the Imrali Prison. Arkas and Kuran answered questions for Mikail Barut, a journalist held in the same prison, for the Özgür Gündem newspaper, pointing out the threats against Afrin and Rojava. One day after the interview was published, the newspaper had been shut down.

“THE REALITY OF A FIGHTING PEOPLE”

In Arkas and Kuran’s interview published in Özgür Gündem newspaper on August 15, Öcalan’s warnings and views on the threats against Afrin and Northern Syria stand out. In the interview, Arkas spoke of Öcalan’s warnings about Rojava as: “For instance, our guys are loosely insistent on rebuilding Kobanê. If you allocate all efforts in rebuilding activity, if you disregard that you are in a war, you will be hit more. You are in war, there is a war on. If necessary, even married couples should stay away from each other and organize their lives in accordance with the war.”

Arkas had said that Öcalan had extensive warnings and criticisms for Afrin in particular and relayed Öcalan’s comments of, “With this situation, if they remain stuck in Afrin they will get hit. There is already an attempt to surround them step by step.

There is constant news about Afrin about how many textile workshops were founded and how much production was in place. So, the capitalist rebuilding efforts come to the fore.

There is a dominant state of not being aware of what they are up against.

“JARABLUS AND AZAZ SHOULD HAVE BEEN TAKEN”

Akkas stated that according to their conversations, Öcalan said, “The Jarablus-Azaz operation was an operation that should have been done a long time ago.” Akkas said Öcalan had stressed that “it (was) understandable to watch out for the balance up to a certain point, but developing revolutionary structures based on their own strength on time would have more initiative in the field”.

“KURDS ARE NOT SHEEP FOR THE SLAUGHTER”

Akkas also said that Öcalan thought Turkey’s policies on Syria have been wrong from the beginning and that he had said the following on the matter:

“I wish Turkey would give up their Kurdophobia and their dreams to build hegemony in the Middle East, and be able to take the hand we reached out to them. But you can see that I used the words ‘The Spirit of Eshme” as witnessed by millions of people, but they visited the same place and said, ‘terrorist ringleader’. They say they will do all it takes to prevent a Kurdish corridor. Under such circumstances, obviously the Kurds watching all thee will not lie down in front of the blade like sheep for slaughter.”

“IT’S NOT DIFFICULT TO FORM A CONFEDERATION ARMY”

Öcalan’s comments relayed by Arkas showed that one of the popular talking points of the day, the idea of “Border Security Forces” belongs to Öcalan: “All of history has created such an opportunity for the peoples, the conditions are ripe to create the wind of freedom throughout the Middle East with the democratic nation perspective.

The revolutionary process in Rojava will create a similar effect to the French Revolution and the October Revolution.

Creating political and military organizations that Arabs, Turkmens, Persians, Syriacs and Armenians, thousands of people from oppressed groups and different faiths will flock to is both possible and exciting.

If they work with a revolutionary spirit, in 6 months, it is not difficult to form an unbeatable Confederation Army.

What regressive or status quo favoring center would not tremble in the face of such an organization?”

SELF RELIANCE IS THE KEY TO SUCCESS 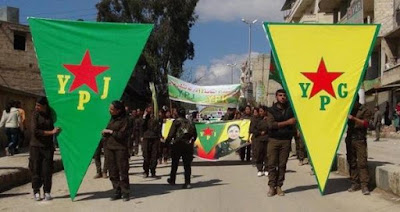 I have not checked the reference, but it is unlike Ocalan to talk in terms of "War Communism" - as far back as the mid-1990s the PKK removed the hammer and sickle from its flag, it denies having a Communist ideology and tends to distance itself as much as possible from any variety of Leninism. Perhaps Turkish state ruthlessness is producing this change, but it is a surprising statement.