TKP ML statement against the fascist aggression initiated by the Turkish state and the AKP-MHP-CHP under the name of "national reconciliation" from the TKP / ML TIKKO Rojava Command.

In our explanations reaching our hand by e-mail, the Rojava Command reminds us of the period when the gangs of the imperialist states and mainly the state of the Turkish Republic . "/ we will be actively involved in resistance to attacks, just as it is in Kobanê. "

"The Fascist Republic of Turkey, which has shown all kinds of aggression since the beginning of the Rojava Revolution, has tried to strangle the revolution.

The fascist TC, who stared at Afrin for a long time, started bombing Afrin with aircrafts as of January 20th.

This attack, the fascist AKP government's 'Olive Branch' will turn into a rope for the AKP, with the resistance by the people.

The Rojava people, who have defeated and defeated everywhere  the Turkish state has provided to support, will erode the assaults of reactionary fascist gangs that appear in other names this time. "

"Whatever happens, the end will be fabulous!"

"We will be actively involved in the resistance of the TKK / ML affiliated TKKO to the attacks of the TC against the as the Rojava force, just as in Kobanê.

In Turkey, Turkey in Kurdistan, all progressives in various European countries, patriotic, revolutionary democrats sector, laborers, women, our friends and our comrades,  people of taking these as active in the honorable struggle, TC fascist reactionary attacks and imperialism we are urging all their  dirty plans to come to naught.

No one doubts that, like the Sehîd Çiyager from the heroes of the resistance, in our struggle against fascism, 'Whatever happens, the end will be magnificent'.

Support the dignified struggle of the oppressed for life! 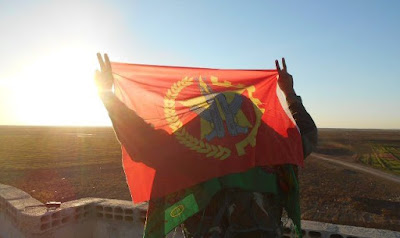 Any errors in translation are those of DCS not TKP ML