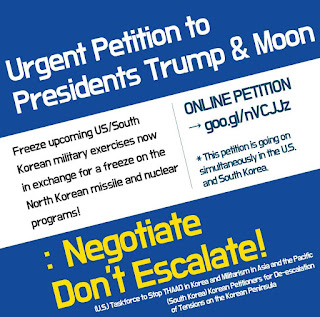 As residents of South Korea, the United States and the world, we are united in our fervent desire for a peaceful, just resolution of the extremely dangerous conflict on the Korean peninsula.

With tensions exploding, it’s clear that sanctions and military pressure against North Korea are continuing to fail.

It’s time to lead with diplomacy. We urge President Trump and President Moon to begin diplomatic dialogue with North Korea by freezing the upcoming US/South Korean military exercises in exchange for a freeze of North Korea’s nuclear and missile testing.

We ask that you also remove from Korea the controversial THAAD missile system (radar and other equipment) that intensifies conflict with China and Russia, and threatens to create a wider conflict.