The Chinese People will not tolerate Aggression by Zhou Enlai 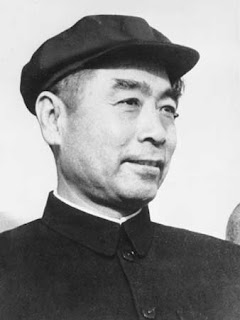 In Beijing on 18 October 1950, Zhou met with Mao Zedong, Peng Dehuai, and Gao Gang, and the group ordered the 200,000 Chinese troops along the border to enter North Korea, which they did on 25 October.

Orders given by Zhou to the PVA were delivered in the name of the Central Military Commission.


We print below extracts from one section, dealing with the liberation war and foreign policy from a report given to the National Committee of the People's Political Conference.

The whole report will appear in Communist Review for November.

A YEAR HAS ELAPSED since the founding of the People's Republic of China on October 1, 1949. This has been a year of great victories and swift advance for the Chinese people.

We have traversed the past year under conditions of continuous victories in the people's liberation war. The Chinese people's war of liberation, which began in July 1946, had already achieved fundamental victory on the eve of the founding of the People's Republic of China in 1949.

The Chinese people have annihilated the American- equipped Kuomintang brigand armies throughout China's mainland and won this enormous victory. What lesson can we learn from this? The most important lesson is: such a big victory can never be an accidental phenomenon of history, but is the necessary outcome of the many revolutionary struggles of the Chinese people during the past century. Such an enormous, swift and thorough victory cannot be conceived apart from the selfless support of millions of people.

This victory of the Chinese people is entirely different from all the "unifications" in China's history. Formerly, there was this and that sort of "unification", but the unifiers were either the oppressors of the people from the start or else became so afterwards. Therefore, they could not achieve real unification, and such unifications could not but collapse after a little while.

Today the first unification of the Chinese people has emerged. The people themselves have become the masters of Chinese soil, and the rule of the reactionaries in China has been irrevocably overthrown.

Since the enemy annihilated by the Chinese people was armed by the U.S. Government, then we can completely affirm that the Chinese people have not only won victory over the enemy at home, but also over the enemy abroad—that is, the imperialist interventionists of the United States. If the American imperialists still want to intervene in and invade China with whatever new means and in whatever new forms, they will then meet with the same defeat that befell the Kuomintang.

The struggle between the Chinese people and the remnant of Kuomintang reactionaries has not yet come to an end. This is because Taiwan, which is occupied by the reactionary remnants, is now under the direct control of the American Navy and Air Force.

The People's Liberation Army is determined to liberate Taiwan from the grip of the American aggressors, and to clear out the lairs of the reactionary brigands of China once and for all. It will be seen that, in the war for the liberation of Taiwan, our strategic position is much better than any enemy's. On our side stands inspired righteousness; our rear is close, vast and consolidated and we are now redoubling our efforts for the final victory.

The People's Liberation Army is also determined to march westward to liberate the Tibetan people and defend the frontiers of China. We are willing to undertake peaceful negotiations to bring about this step, which is necessary to the security of our motherland. The patriots in Tibet have expressly welcomed this, and we hope that the local authorities in Tibet will not hesitate in bringing about a peaceful solution to the question. .

On the question of establishing diplomatic and trade relations with foreign countries, the Common Programme stipulates: "The Central People's Government of the People's Republic of China may, on the basis of equality, mutual benefit and mutual respect for territory and sovereignty, negotiate with foreign governments which have severed relations with the Kuomintang reactionary clique and which adopt a friendly attitude towards the peoples of China, and may establish diplomatic relations with them." "The People's Republic of China may restore and develop commercial relations with foreign governments and peoples on a basis of equality and mutual benefit." The foreign affairs of the Central People's Government in the past year were conducted in accordance with these basic principles.

The People's Republic of China resolutely sides with the world camp of peace and democracy headed by the Soviet Union and has established the closest fraternal relations with the Soviet Union. During Chairman Mao Tse-tung's visit to the Soviet Union, China and the Soviet Union signed the Sino-Soviet Treaty of Friendship, Alliance and Mutual Assistance, which is of great world historic significance. Because of this treaty, great peoples of the European and Asiatic continents to the number of nearly 700 million have united in close alliance militarily, economically and culturally, and have thus greatly strengthened the power of the two countries to safeguard themselves against aggression in the east.

Simultaneously with the signing of this treaty, or a little later, China and the Soviet Union further signed the agreements on the Chinese Changchun Railway, Port Arthur and Dairen, the agreement on the granting of credit to the Central People's Government of the People's Republic of China, and five other economic and trade agreements.

In these agreements, our great neighbour extends Much generous assistance to China in the period when she is recovering from her war wounds. The whole Chinese people are greatly elated with the signing and implementation of the treaty and agreements between China and the Soviet Union and express their boundless thanks for the friendship extended to them by the leader of the Soviet Union, Generalissimo Stalin, and the Government and people of the Soviet Union.

China has also signed trade contracts and agreements with Poland, Czechoslovakia and Korea. Trade negotiations are under way with Germany and Hungary.

Trade relations have also developed between China and certain capitalist countries. The total amount of China's foreign trade is estimated not only to reach, but to surpass the original plans.

The problem of the establishment of diplomatic relations with capitalist countries is more complicated than that of establishing trade relations. Here 1 may mention, especially, our long-drawn-out negotiations with Britain, out of which nothing has yet come. The reason for the fruitlessness of the negotiations is that the British Government has made known its recognition of the People's Republic of China on the one hand, while on the other it agrees to permit the so-called "representatives" of the reactionary rump of the Chinese Kuomintang clique to continue its illegal occupation of China's seat in the United Nations. This makes it difficult to commence formal diplomatic relations between China and Britain. And Britain's extremely unjustifiable and unfriendly attitude toward Chinese residents in Hong Kong and other places cannot fail to draw the serious attention of the Central People's Government.

Despite the just criticisms of the Soviet Union, India, and other countries, the U.S. stubbornly obstructs the representatives of the People's Republic of China from attending the United Nations and its various organs, and shamelessly protects the seat of the so-called "representatives" of the Kuomintang reactionary rump. Similarly, the U.S. debars the Chinese representatives from attending the Allied Council for Japan and plots to exclude China and the Soviet Union in concluding a peace treaty with Japan, in order to rearm Japan and retain America's occupation troops and military bases in Japan.

The U.S. deliberately concocted the assault of the Syngman Rhee gang against the Korean Democratic People's Republic in order to expand its aggression in the East and then, on the pretext of the situation in Korea, despatched its naval and air forces to invade Taiwan, a province of China, and announced that the so-called problem of Taiwan's status should be solved by the American-controlled United Nations. Moreover, time after time, it sent its air force, which is invading Korea, to intrude into the air over the Liaotung Province of China, strafing and bombing, and sent its naval forces which are invading Korea to bombard Chinese merchant shipping on the high seas.

By these frenzied and violent acts of imperialist aggression, the U.S. Government has displayed itself as the most dangerous foe to the People's Republic of China. The U.S. aggressive forces have invaded China's borders and may at any time expand their aggression. MacArthur, Commander-in-Chief of the American aggression against Taiwan and Korea, long ago disclosed the aggressive design of the U.S. Government, and is continuing to invent new excuses for extending its aggression.

The Chinese people firmly oppose the aggressive brutalities of America and are determined to liberate Taiwan and other Chinese territory from the clutches of the U.S. aggressors.

The Chinese people have closely followed the situation in Korea since she was invaded by the U.S.A. The Korean people and their People's Army are resolute and valorous. Led by Premier Kim Jr Sen, they have scored remarkable achievements in resisting the American invaders and have won the sympathy and support of people throughout the world. The Korean people can surely overcome their many difficulties and obtain final victory on the principle of persistent, long-term resistance.

The Chinese are peace-loving people. One hundred and twenty million Chinese have already signed their names to the solemn Stockholm Appeal and this signature movement is continuing to develop among the Chinese people. It is obvious that the Chinese people, after liberating the whole territory of their own country, want to rehabilitate and develop their industrial and agricultural production and cultural and educational work in a peaceful environment, free from threats. But if the American aggressors take this as a sign of the weakness of the Chinese people, they will commit the same fatal blunder as the Kuomintang reactionaries.

The Chinese people enthusiastically love peace, but in order to defend peace they never have been and never will be afraid to oppose aggressive war. The Chinese people absolutely will not tolerate foreign aggression, nor will they supinely tolerate seeing their neighbours being savagely invaded by imperialists. Whoever attempt to exclude the nearly 500 million Chinese people from the U.N. and whoever set at nought and violate the interests of this one-fourth of mankind in the world and fancy vainly to solve any Eastern problem directly concerned with China arbitrarily, will certainly break their skulls.