Anti-war campaigners will deliver a letter to the US ambassador to the UK on Friday protesting US President Donald Trump’s “inflammatory” statements towards North Korea, which they warn could “increase the likelihood of a catastrophic confrontation. 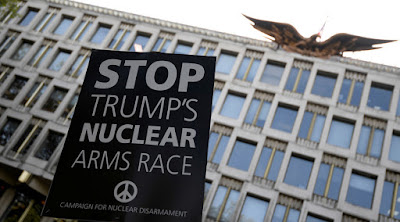 Anti-war campaigners will deliver a letter to the US ambassador to the UK on Friday protesting US President Donald Trump’s “inflammatory” statements towards North Korea, which they warn could “increase the likelihood of a catastrophic confrontation.”

Washington and Pyongyang have traded a series of threats since Kim Jong-un’s hermit regime announced it is now capable of striking US territory with an intercontinental ballistic missile (ICBM) carrying a nuclear warhead.

Responding to the development, Trump told North Korea the regime “will be met with fire and fury” if it threatens the US.

The US warned Pyongyang its actions could mean the “end of its regime.”

“The standoff between the US and North Korea is frightening,” Stop the War said in a statement.

“The cycle of threat and counter-threat is creating an appalling situation in which warfare between nuclear states is being discussed as a serious option on both sides.

“In this context Donald Trump’s outburst against the North Korean regime is deeply troubling. What impact can threats of ‘fire and fury’ have but to escalate tension and increase the likelihood of a catastrophic confrontation?”

The group, which led public opposition to Britain’s 2003 invasion of Iraq, said diplomatic solutions ought to be pursued alongside a wider de-militarization on both sides around the Korean Peninsula.

“The urgent priority must be the opposite, to de-escalate and pursue a negotiated resolution to the crisis, which major players in the region are trying to achieve and most commentators recognize as eminently possible.