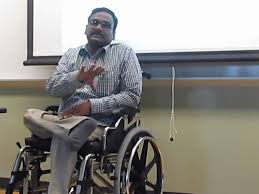 I call on you once again regarding your responsibility as High Representative of the European
Union for Foreign Affairs and Security Policy in order to ask for your much-appreciated reaction
about the dramatic situation of Professor GN Saibaba.

As you know, the Nagpur High Court have refused the release on bail of Professor GN Saibaba.
During the current European Parliament term, two written questions have been addressed to
the European Commission regarding the situation of the Indian professor GN Saibaba sentenced
to life imprisonment. He has a 90% physical disability, aggravated in recent months with acute
pancreatitis, and it was recommended the removal of his gallbladder.

Because of this, this life imprisonment sentence is actually a death sentence for this professor,
who has done nothing but defend the rights of the Adivasis and Dalits people with words, as
well as denounce the counterinsurgency strategy ʹOpera on Green Huntʹ.

On June 26 2018 United Nations human rights experts urged the government of India to release
the teacher for health reasons and to ensure immediate access to medical care, including
appropriate treatment and rehabilitation: “We would like to remind India that any denial of
reasonable accommodation for people with disabilities in detention is not only discriminatory
but may well amount to ill-treatment or even torture. In particular, solitary confinement should
be prohibited when the conditions of prisoners with disabilities would be made worse by this
measure”.

The answers given by you on behalf of the European Commission were the following: “The EU has been closely following cases of human rights defenders arrested in India, including the cases of professor Saibaba, accused of having links with Naxal militants, and of Ms. Arundathi Roy, accused of contempt of court for her article defending the cause of Professor Saibaba”. “The EU Delegation in New Delhi has made appeals on humanitarian grounds with the National Human Rights Commission.

The EU attaches great importance to the issues at stake, most importantly to the freedom of expression, the right to a fair trial and the rights of human rights defenders. These issues are also addressed at the EU-India human rights dialogue.ʹ ʹThe EU continues to follow the case of professor Saibaba convicted by sessions court in Gadchiroli district of Maharashtra in March 2017. As Professor Saibaba lodged an appeal against the verdict with the Nagpur High Court, the case is still sub judice. The EU has been raising the case on humanitarian grounds with the Indian authorities”.

On March 25 2019 the Nagpur High Court, in an unprecedented decision, has decided to deny
bail to the professor, condemning him definitively to death. The European Commission cannot
remain impassive and be complicit in such a violation of Human Rights.

I must to demand from the European Commission all the necessary measures for the
immediate release of the professor GN Saibaba. If this does not happen, and in line with the
human rights advocacy that EU is committed to, I think it would be timely to halt all EU
agreements with India.