Slavoj Zizek and the Madness of Eclecticism by Nickglais 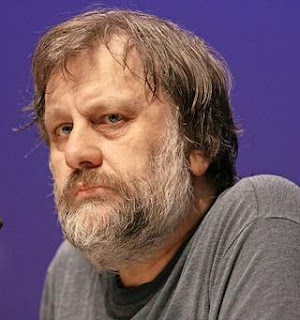 Democracy and Class Struggle says we subjectively wanted to say something positive about Slavoj Zizek - the more we looked at his performance at the debate with Jordan Peterson we found no saving graces - Zizek is in transition from Marxism to the Madness of Electicism  - we fear his next destination will be Syncretism the home of the right and Post War Fascism..


The Slovoj Zizek statement to the Zizek /Peterson debate made no attempt to be an ordered refutation of a text like Jordan Peterson on the Communist Manifesto - it  was the  monologue of an intellectual dilettante suffering from the madness of eclecticism - eclecticism for Zizek is a virtue not a sin - which shows how far Zizek has  departed from Marxism.

The first question which we asked was why did Zizek not refute the Communist Manifesto Story of Jordan Peterson - it was an invitation to an open goal but Zizek although capable of demolishing Peterson's Story Telling did not.

The question of why he did not -  exposed his yet deeper links to Peterson  - or where Peterson and Zizek are joined at the hip Psycho Analysis.

See our comparison of Marxism and Psycho Analysis here :

Slavoj Zizek sort of identified happiness  with contemporary Confucian capitalist China - where nihilism  reigns - Maoism was a period of real happiness of the collective but you will not hear that from Zizek who propagates the Communist Horror Stories usually as anecdotes just as they are collapsing as objective evidence shatters the long held myths in the West about Maoist China.

To say nothing about how Stalin has emerged the most popular in Russia that he has been since 1956 - not because Russians are psychotic and are mentally ill but because historical reality has broken through with new historical research and the Western nonsense about the Soviet Union is seen for what it is ideologically inspired propaganda sickness and projection of West's fears onto Communism which is personified in the living person of Jordan Peterson who sounds like a Senator Joseph McCarthy on a anti Communist Rant of Good and Evil which his audience loves.


Eclecticism is the practice of selecting and compiling doctrines from different contradictory systems of thought.

We end unfortunately agreeing with Noam Chomsky saying Žižek is guilty of "using fancy terms like polysyllables and pretending you have a theory when you have no theory whatsoever," and also said that Žižek’s theories never go "beyond the level of something you can explain in five minutes to a twelve-year-old

I think the far right feel the same way about Peterson that you do about Zizek. Both are full of BS.

Zizek is not a leftist or a rightist
He is simply a charlatan. He is not Sartre.
In itself, are there not valid eclectic and syncretic doctrines?

Is not Marxism a synthesis of French revolutionary doctrines, German Idealism, and English economics? Could Marxism not be called eclectic as well?

Lenin said. Eclecticism is unsystematic and self contradictory random accumulation of theories. Marxism is a logical synthesis which resolves the contradictions in its component elements and in so doing sublates them

ECLECTICISM
A confused blending of diverse, inherently conflicting ideas, opposed political views, incompatible philosophical conceptions, incoherent combinations of theoretical premises, and the like.
In philosophy this often takes the form of attempts to combine materialism with philosophical idealism, as with the frequent attempts of bourgeois-influenced semi-Marxists to incorporate Kantian epistemological agnosticism or positivistic empiricism into their theories. (Lenin had to strongly combat this tendency among some of the Bolsheviks in his 1908 book Materialism and Empirio-Criticism.) In ethics, too, there have been frequent attempts to shoehorn Kantian absolutism (such as the notion of the categorical imperative) into the fundamental Marxian ethical theory based on collective interests of social classes.
In political economy one of the most common forms of eclecticism is the attempted merger of Keynesian theory with Marxism, as for example with the Monthly Review School.
And of course in politics itself there have been endless attempts by revisionists to combine bourgeois political theory in its many forms with Marxism, leading to things like the notion that revolution can be achieved “through the ballot box”; that socialism just means nationalization; that the dictatorship of the proletariat is no longer necessary under socialism; and on and on.
Eclecticism in its many forms within Marxism is a reflection of the fact that bourgeois ideas dominate our current society, and are even still part of the thinking of people as they turn toward revolution. As Lenin remarked, a person cannot live in a society and at the same time be totally free of it! An important way to combat eclecticism in our own thinking is to work to explore Marxist theory more deeply, to engage in serious and careful investigations of past theoretical struggles within Marxism, and to really focus on what the central dialectical contradictions are in any particular sphere of revolutionary Marxist theory. Combatting eclecticism and non-Marxist ideas within Marxism does not mean that Marxist theory can never be changed; but it does mean that we owe it to our revolutionary predecessors to only change the theory when there are very good and very well considered reasons for doing so. We must strive to maintain revolutionary Marxism (or Marxism-Leninism-Maoism) as the coherent overall social theory it has become through long and hard struggle.

Syncretism (/ˈsɪŋkrətɪzəm/) is the combining of different beliefs, while blending practices of various schools of thought. Syncretism involves the merging or assimilation of several originally discrete traditions, especially in the theology and mythology of religion, thus asserting an underlying unity and allowing for an inclusive approach to other faiths. Syncretism also occurs commonly in expressions of arts and culture (known as eclecticism) as well as politics (syncretic politics).

Thanks. What you think of Alain Badiou?

We sometime publish Badiou's insights- we have never published Zizek - Badiou still retains some Maoism in his world outlook but his philosophy particularly the replacing dialectics with set theory his rejection of the Party form are serious errors.

You are a bit hypocritical. Zizek was challenged by Raymond Lotta to debate, which Zizek accepted but never showed up. To debate BA's New Communism and the New Synthesis.

Badiou has been refuted by BA.