SALUTE PUNJAB RADICAL STUDENTS UNION AND NAUJWAN BHARAT SABHA FOR SHIMMERING THE TORCH OF LIBERATION COMMEMORATING CENTENARY OF JALLIANWALLAH BAGH IN SANGRUR IN PUNJAB YESTERDAY THROUGH A POLITICAL CONFERENCE.LIT A SPARK TO CREATE A PRAIRIE FIRE TO RESSURECT SPIRIT OF MARTYRS WHEN MORALLY THE RULERS OF TODAY ARE RE-ENACTING THE EVENT OF JALLIANWALLAH BAGH BY TAKING FASCISM TO ITS CRESCENDO.

Around 700 students and youth assembled in the town hall in Sangrur in a political conference commemorating centenary of Jallianawallah Bagh massacre.A most qualitative success in raising political consciousness in context of modern times .

Rakesh Kumar gave the historical narrative fitting the event in the current context.He covered the topic of how the contribution of martyr Udham Singh was distorted today and portrayed hsi actual contribution.

PRSU President Rashpinder Jimmy spoke about the topics of education and unemployment.He summarized how the govt policies were promoting more and more unemployment by cutting jobs through intense mechanization and how education was virtually becoming unafforadable with the consolidation of privatization. He gave examples of the important struggles opposing closure of colleges ,fee hikes etc.

NBS President Jagseer spoke about the topics of Communalism and Fascism and explained the similarity between the colonial regime with the rulers of today.He also gave a detailed description of the problem sof the dalit agricultuarl labouresr and the farmers. 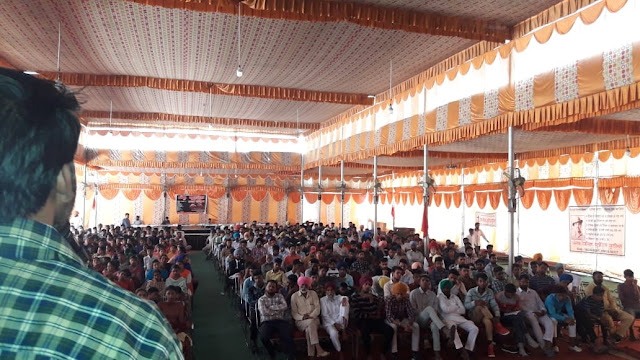 The programme was staged after meticulous and painstaking preparations in areas of Sangrur and Patiala,particularly in educational institutions. An intense campaign of posters, leaflets, meetings and rallies in Patiala-Sangrur and hundreds of villages-cities was launched.The goal of anew democratic India was propogated which was the dream of the martyrs.

1- To achieve free and common education.

2 - To get the most appropriate and honorable employment for all the youth.

3- To eradicate the stigma of caste.

4- To remove the Patriarchal and Anti-women ideas from the society.

5- Focus on Democratic, secular and scientific culture, rather than semi-feudal and imperialistic culture.

6 For achieving respectable life, including land, democracy and equality for all the hard work including farmers and laborers.

To say that the martyrs' dream was created a new and democratic India, the youth and the students were invited to come forward and campaign and mobilization on a wide scale. A campaign of posters, leaflets, meetings and rallies in Patiala-Sangrur and hundreds of villages-cities was launched
Posted by nickglais on 3/29/2019 06:30:00 AM