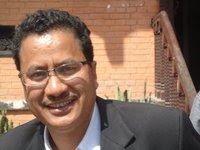 Democracy and Class Struggles Publishes this interview even though it was before Bhattarai was made Prime Minister because it exposes the Bhattarai line. His Interview with the Hindu further down this page exposes Bhattarai in his own words.

It first appeared on Winter Has Its End (WHIE).

WHIE: Very sharp differences have emerged in your party over army integration. Could you explain those to us?

BIPLAB: We have a two-line struggle going on in our party over the integration of the People’s Liberation Army (PLA). This struggle has mainly been targeted at Baburam Bhattarai, but at the moment it has become focused on Prachanda. Prachanda is claiming that we can go forward by accepting the integration proposals of the reactionary forces in Nepal.

They are ready to dissolve, not integrate, the People’s Liberation Army which fought for 12 years, into the Nepal Army.

It is amazing that the Nepal Army has put forward proposal about integration. Their proposal gives them leadership and disintegrates the People’s Liberation Army under it. The PLA is treated not as soldiers of Nepal. It suggests that the PLA step aside into local bureaus, and become unarmed forest guards. Prachanda is accepting their proposal.

Right now, the PLA’s arms are confined to containers. The Nepali Congress and UML parties [corrupt pro-Indian and status quo parties] are demanding that these arms be destroyed, and Prachanda is sympathizing with them.

They want to divide the PLA into two factions where most people are sent home, and a small number are integrated. We will not accept this plan.

We think the line that Prachanda has taken is right-revisionism. It will liquidate our forces and army. It will end the revolution. We do not accept it.

To integrate the PLA, two things must be solidified:

1.The majority of the PLA has to be integrated.

2.The PLA must lead its units, and the PLA must take leadership positions in the army.

We want free units and collective integration. They are denying these things, and the struggle is over these points.

WHIE: Previously, you had spoken about the Palungar meeting in October of 2010. Can you explain what the Palungtar meeting was, and your views on it? How have things developed in your party since Palungtar?

BIPLAB: Palungtar was such a large mass meeting of our party. In that meeting, three positions were presented, but in reality there were only two lines.

We argued that we have no option in going forward other than to launch a people’s insurrection. Chairman Prachanda argued that insurrection is important, but we cannot end the peace process. Baburam Bhattarai argued we must compromise with the other parties, and insurrection is not possible. Therefore, we must achieve our goals through future legal amendments.


After six days of discussion, we reached a three point conclusion:

Unfortunately, Prachanda left his line in the center. Prachanda’s line did not carry out these decisions.

In his most recent document, Prachanda did not even include the word insurrection. Even Baburam Bhattarai thinks the latest document of Prachanda is right-revisionist [laughs]. Prachanda apologized to Bhattarai and said he was afraid of being too provocative towards Bhattarai. But Bhattarai [laughing], the right of our party, was trying to get Prachanda to keep that point. It is quite amazing.

After 23 years of leading us, for the first time Prachanda has lost his leadership among us. The right revisionists are vacillating in our party. In the near future, we want a major reform in our party.

This dispute may be used by the reactionary Nepali Congress and UML parties. Most of the reactionaries have praised Prachanda, and asked people to endorse the line of Prachanda. They will not fulfill their dream.

This line struggle will continue throughout the revolution, but every day the chances of Prachanda being able to lead the revolution continue to dwindle. If the party can be reformed, we will go ahead together. Even if we cannot go together, nothing will stop the coming revolution of the Nepalese people.

WHIE: How do you assess the attempts by Baburam Bhattarai to become the Prime Minister?

BIPLAB: We are fighting an extraordinary type of struggle right now. Bhattarai wants leadership of the government, but does not want revolution.

We want revolution, so we are trying to develop ways to go beyond the rifts between Prachanda and Bhattarai. We have been discussing whether it is better if Bhattarai or Prachanda is the Prime Minister, and both are vying for that position. In the final analysis, we have control of the party, and if we do not decide then neither can become Prime Minister.

We find that the reactionaries say they will support Baburam Bhattarai if we forward him for the election. But if we put him forward, suddenly they support Prachanda. It is quite interesting, but they must not interfere.

If Prachanda or Bhattarai becomes the Prime Minister, it will actually not matter very much. The people must come to lead Nepali society.

We think the truth is that the Constituent (CA) actually is not going to be dissolved. The political analysts keep warning of anarchy and of the CA being dissolved… it is not reality.

The foreign and reactionary powers would rather wait three months for a compromise constitution [rather than a revolutionary New Democratic constitution advocated by Biplab and Kiran], and use this transition period to break the people’s revolutionary spirit. In the final analysis, their tactics are correct. It will lead to a bad place.

To make revolution, we must mobilize all of the revolutionary factors, not rely on the bourgeois factors.
Posted by nickglais on 9/08/2011 09:45:00 AM