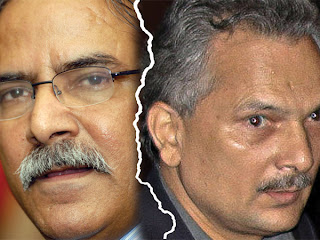 PM Bhattarai, who is also the vice chairman of the UCPN (Maoist) party, reached Dahal’s residence in Nayabazaar today morning and discussed the achievements of his recent visit to New York to attend the 66th session of the UN General Assembly.

The duo also discussed the agendas of the party’s central committee (CC) meeting scheduled to start from September 30 and ways to counter the severe opposition they are facing from the revolutionary wing of the party led by senior vice chairman Mohan Baidya aka Comrade Kiran to conclude the ongoing peace process by completing the task of army integration and timely constitution drafting.

It is learnt that the two top leaders of the ruling Maoist party, who belong to the revisionist wing , were in favor of postponing the CC meet and holding it only after the week-long Dashain festival.

The CC meet has been called by Mohan Baidya following the dispute among party’s top leadership over the handover of the keys to the PLA arms containers.

Mohan Baidya has termed the handover of the keys of the arms containers as “suicidal” and detrimental to the party’s interests.