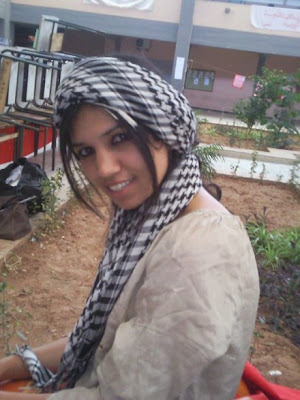 1.Red flag Ilham, for what did you go to jail?

1,Ilham: My arrest came as a result of May 14th - 15th 2008 events, which represent an uprising that brought the students' movement back on the class struggle scene in Morocco. At those days, the students have filed up some of their just and legitimate demands. At the top of these demands was the rejection of a clause allowing the expulsion of militants of the National Union of Students of Morocco, in particular members of the Democratic Basist Path. Since the regime has used all its cards including political arrests and direct physical repression to suppress the struggle of the students' movement, this time it resorted to the new expulsion method.

As a result, the students led different battles reaching a climax in the May 14th – 15th uprising. The uprising witnessed widespread arrests among militants and students, 11 of which the regime would keep, a group that came to be known as "Zahra Bodkour Group" after a female comrade arrested in those events. 10 comrades were jailed for two – three years, while comrade Morad Elchuini is still in jail serving a four-year sentence.

In addition, many arrest warrants were issued for militants who participated in the uprising, I was among them, and on the 12th of October 2010 I was arrested in my family's house.

2.Red flag: How did they treat you, have you been tortured or insulted?

2 Ilham: by its repeated attacks on militants, the regime aims at breaking their will and determination using its repressive methods including the use of verbal abuse, insults, humiliation, physical punishment and beating. The 5 days I spent in the police station were as if I was in a different world, a world full of criminals and torturers who lost their sense of humanity. I was treated as if I was an easy pray for them to show all their brutality, sadism and all their psychopathic illnesses.

However, our principles and convictions remain our best weapon in the confrontation, they strengthen us and make us braver in front of the torturers who find our stares and gazes as painful as loud bullets that hurt, pushing them to start beating and assaulting as an interpretation of their anger, an anger which I only understand as a response to the words we keep saying, words that reflect our adherence to the Mass Line, the line of our impoverished people.


3.Red flag How important was the struggle of your people and international solidarity for your freedom?

3:Ilham: reactionary regimes always try to hide political arrests. That’s why they try to fabricate cheap charges against militants. However, what makes a difference is when the masses cling to their militants, forcing the regimes to confess the real background of those arrests.

The struggle of Moroccan people and all the international movements and organizations which supported me during the arrest was of extreme importance and had a strong echo in presenting my case and the case of all political prisoners. It also had a heavy weight in the political field, while the regime aimed at making Ilham a common criminal, the Moroccan people refused and said this is our daughter, all what she wanted was a democratic, secular, popular and unified education. Hence, all international movements and organization showed their support to our people, something I strongly salute them for, for they clung hardly to our cause and fought for it. I declare my unconditional solidarity with them and their struggles.

4.redflag: Tell us about your goal, real socialism, and the struggle in Marocco for it!

Ilham: I embrace Marxism – Leninism – Maoism as a political and intellectual line, and therefore my aim is to build New Democracy and to fulfill people's national democratic tasks via protracted people's war strategy. This obliges us as militants to be present among the masses in order to organize, mobilize and educate them to reach the quantitative accumulation in their ranks, specially that they are witnessing a wave of massive protests in which their consciousness has mixed with the great role played by February 20th Movement, a movement that is contributing to training the masses on protesting and rallying.
Posted by nickglais on 9/22/2011 12:59:00 PM