Read the ground report of Gadchiroli by Tameshwor Sinha 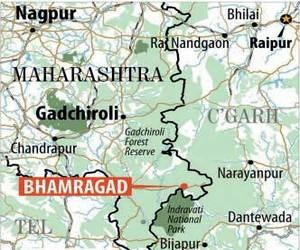 Democracy and Class Struggle says this one of the first ground reports from Gadchiroli which puts a different perspective from Indian Government and Media,

There is a news among the questions raised at Gadchiroli encounter that the police who claimed to be  Maoist, most of them were unarmed and innocent. villagers. Villagers, who went to the wedding ceremony in a nearby  village, were shot by bullets in the name of being Naxalites.

According to the sources, the 8 young young men and women(5 girls and 3 boys) in a village near Indravati river are missing from the village . According to the rural sources, the villagers were gathered in a wedding ceremony.  When the 8 boys did not arrive home , villagers became active to know the situation. They had heard the voice of  firing. A group of them arrived at the police station to inquire about the missing boys and girls, from where the police sent them to the police headquarters.

The police officers asked the villagers or their family to bring a photo of the original Base card and passport size photo.  When the villagers provided the Base card to the police, they were asked to know the dead bodies, but the family could not be able to  know the body, because their skin was completely lost in the water. The villagers still have remained in District Police headquarter , where the police are talking about being referred to the body after a DNA test.

Villagers have said that the police have killed them in the morning, when young men and women were returning from wedding.

People from the Gattepalli village , who are not able to return home after attending the wedding ceremony are :

Let’s tell you among the 8 of the people, Mangesh Chundoo Mandavi, who has 11 student in Bhamaragarh is also missing. The carcass of the dead body may have been rotten and these 8 young young men and women have not been recognized.

On the condition of not writing his name, one person said that the Naxals and security forces might have engaged fighting , they have also been killed, but the Naxalites who managed to escaped and the security forces started firing in the fear of being Naxalites in the marriage.

In which many innocent villages have also been killed. After the encounter,the news was given to the media  of the death of the Naxals. The whole media was competing with the name of the top Naxalite leader.

No one asked that a tribal village has also been killed? Due to this, the series of dead bodies continued for three days and the police have recovered 39 bodies so far.

The question is that when 8 young men and women in a village who attended the marriage ceremony, were victims of the police firing, the other village people nearby would have been in that marriage. Then it is natural, to demand for an independent investigation of this so called encounter from the various organisation including the revolutionary poet Varavara  Rao.

The news is that there is a panic in the villages nearby. Security forces have forced to the villagers not to tell anything to the people of  outside. There is a lot of fear in the nearby villages, looking for their own people. According to another know, nearby rural youths also are still missing. According to sources, three boys were taken to the police, and it is not yet known. Rajaram is missing among the  few young men from village

There is no Maoist record, no any police warrant, of any of the people killed by the police, who are claiming it as encounter. The smell of a deep conspiracy is in such a way.

Now the question has raised, the Police, somewhere, is not manufacturing  a  story for the suppression of the people?

(Tameshwor Sinha is young and energetic journalist, and now live in Bastar. He is known for  ground reports. )