India: another massacre in a “false encounter” by the forces of the fascist Hindutva State: 37 Maoist comrades murdered at Gadchiroli 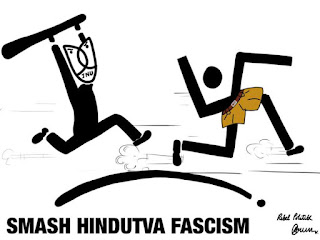 India: another massacre in a “false encounter” by the forces of the fascist Hindutva State:
37 Maoist comrades murdered at Gadchiroli

Mobilization for denounce and solidarity wherever possible and in all possible forms!

On 22 and 23 April no fewer than 37 alleged Maoists were massacred, after being surrounded by police and paramilitary forces. The massacre could also be larger. From the river Indravati corpses have emerged several hours after the killings and the waters could return others.

In addition, the district has been completely surrounded by police and paramilitary forces that continue illegal searches and incursions against the villagers.

Nor, as on many previous occasions, we know if and how many of the killed people were actually Maoists and armed and how many innocent villagers.

What is certain is that there was not a real encounter but a surprise attack with grenade launchers while the assaulted men were having breakfast or resting.

What is certain is that it has been another massacre of the bloody and ruthless war on people that the Indian state has unleashed.

It has been released a video showing jawans celebrating the "success" by dancing among the corpses.

May the rage and indignation against this barbaric massacre and the fascist and genocidal regime that ordered it spread all over the world.

This massacre is part of the Operation Green Hunt - a gigantic and protracted operation of repression and annihilation of the armed struggle of the masses and the mass struggle in general launched by the Indian state, today led by the Modi’s fascist Hindutva regime.

As part of this operation, in its third phase, there are massacres, deportations, devastation, mass rape and massive and systematic wave of arrests, disappearances, in the countryside as in the cities, universities and against the mass movements, with systematic violation of human rights.

It results in 10,000 political prisoners, including some prominent intellectuals, such as Professor Saibaba, artists, lawyers, student leaders and of course some prestigious Maoist leaders such as Kobad Gandhi, Ajith and others. And now this new massacre in a vain attempt to stop the rebellion of the Indian masses and the people's war led by the CPI (Maoist)

Pay homage the martyrs of Godchiroli, murdered in the service of the grandiose and glorious struggle for the liberation of the Indian masses that since the armed peasants uprising of Naxalbari, 50 years ago, has never stopped and advances indomitable to victory.

Organize everywhere is possible protests to embassies and consulates and information and solidarity actions!

Support and help to realize the Spring Thunder Tour, a protracted campaign that will reach the largest number of countries in Europe and the world!

Mass initiatives are needed among the masses, for a powerful support and a powerful protest movement against the Hindutva fascist regime of Modi, lackey of imperialism.

Freedom for all political prisoners in Indian