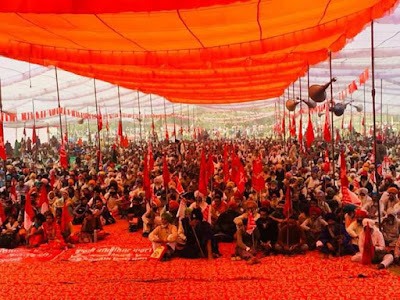 Salute great rally in Punjab of 4 communist revolutionary forces belonging to the October revolution commemoration committee ressurrecting the sacred torch of Leninism on day of centenary of Russian revolution.No event defined or progressively turned the fate of mankind like the Russian revolution.

The Godiwala stadium in Moga was illuminated by rekindling the flame of the October Revolution creating the impact of thunder . The spirit of the historic event was blazing in the hearts of the participants who displayed great resolve and determination to defend the line of international proletarian revolution withstanding the counter-offensive of the enemies.

The venue of Moga literally resembled an ocean with more and more streams converging.We must salute the painstaking efforts of the organisers.Speeches were also inspiring particularly that of Darshan Singh Khatkar of C.P.I.(M.L.)New Democracy who highlighted the great achievements of the Socialist Society of Soviet Russia like phenomenal production.

Sukhwinder Kaur of Lok Sangaram Manch narrated the need of the party and its protracted role in arousing the masses of Russia.She explained the necessity of the proletarian party and how decades back it was imperialism that collapsed and not Socialism.Inspiring to see the great enthusiasm of women and students.She also defended the role of Stalin.

Comrade Mukhtiar Phoolar of Inquilabi Kendra described the historical background sumarizing how he first workers state was ever formed.Jaspal Jassi,editor of Surkh Leh journal vividly described the upheaval of the masses and inspite of speaking for a short time reflected great theoretical clarity..

The event proved the revolutionary potential of the masses and is an inspiration to workers all over the globe.It was a truly touching sight for any revolutionary cadre to be present in the rally .Arguably nowhere in India has any programme been held in any part of India on the October revolutionary centenary displaying such a high level of discipline and intensity.Significant that a very important organizational role was played by a constituent organization.very loyal to the C.P.I.(Maoist)

Namely the C.P.I.(M.L.) New Democracy,the Inquilabi Kendra,the Lok Sangram Manch and the Krantikari Lok Morcha were part of the Committee.The Unity of forces belonging to 4 different trends including 2 withing the maoist camp had great significance towards the communist revolutionary movement of Punjab.

No partiality or sectarian approach towards one particular group was exhibited and all 4 groups displayed great co-operative spirit..

Around 6000 persons participated.The largest mobilization was of the C.P.I.(M.L.) New Democracy group followed by Lok Sangram Manch.Nevertheless every group of the participating committee made an equal contribution morally.I was impressed to see the enthusiasm of the students who were mobilised by the Democartic students organization and Punjab students Union.

The participation of Naujwan Bharat Sabha was relatively neglible.The majority of cadres comprised from the Pendu mazdoor union .The Surk Leeh journal as well as BKU(Ugrahan) and Punjab khet Mazdoor union made a token participation but was not a part of the Commite commemorating the event,.They disagreed with joining revolutionary parties and making mass organizations join such a platform.This is the view of the Communist Party Re-Organization Centre of India(Marxist-Leninist) and Surkh Leeh. 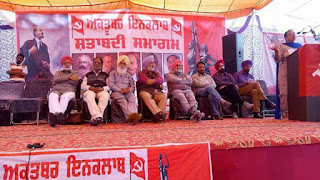 There was a subtle difference between what Jaspal Jasi portrayed who is editor of Surkh Leeh and Sukhwinder of Lok sangram Manch.Jassi narrated that ultimately instead of 4 groups one day we should all be one like in the Bolshevik revolution.Sukhwinder technically corrected it indirectly stating that even at the time of revolution differences and different groups would persist referring to the situation in Soviet Russia in 1917.She felt Jassi's portrayal was progressive but idealistic..

Neverthless in the view Pavel Kussa of Naujwan Bharat Sabha ,Jaspal Jassi made the  best speech in terms of theoretical content while Mukhtiar Phoolar of Inquilabi Kendra was overall most impressive.In my personal view on the day the speech of comrade Darshan Khatkar stole the show.

At the conclusion of event a march was held around the neighbouring area comprising around 3-4000 people.

I was also greatly impressed by the cultural programmes staged which deeply related to the problems of the broad masses.Great discipline and tenacity was also displayed by the student cadres,particularly of Punjab Students Union.

I was privileged to witness the event and congratulate the painstaking work of cadres and leaders.I particularly thank Balwant Makhu for his inputs and Sukhwinder Kaur.The event proved that inspite of victory of Imperialism there is great potential of the seeds of revolution are in the stage of being sown again photo of sukhwinder kaur adressing rally 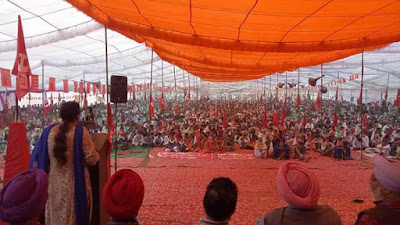