Korean Tragedy by Tim Beal - The Failure of Moon Jae-in 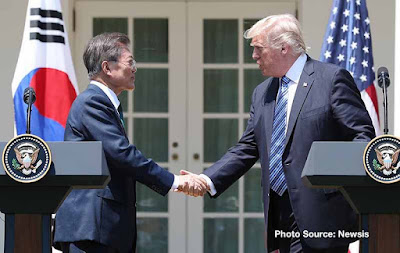 We publish the third part but strongly recommend you read the parts one and two which we have linked to our pages get a better understanding of Moon Jae-in's failures and what South Korea needs to do to improve inter Korean Relations.


Since parts one and two of this article were published on 15 August (by a cruel irony the anniversary of Korea’s liberation from Japanese colonialism), events have moved rapidly and decisively to confirm that Moon Jae-in’s failure to seek autonomy from American dominance and his enthusiastic embrace of the client status manifested in the US-SK alliance is pushing his country, the peninsula and perhaps the world deeper into danger.

The major events in this short period were North Korea’s test of a Hwasong-12 intermediate range ballistic missile (IRBM) on 29 August and the nuclear test, purportedly of an intercontinental ballistic missile (ICBM)-compatible H-bomb on 3 September. Both tests demonstrated North Korea’s rapid progress in developing a nuclear deterrent, and although development has been faster than American experts expected, the tests were predictable.

As long as the US refuses to engage in meaningful negotiations, Pyongyang has little choice but to press ahead. Moreover North Korea is in a perilous situation at the moment–the period between America’s realisation that before too long it will have the capability to deliver a high-yield bomb to the US mainland, and the attainment of that capability.

This imparts great urgency to North Korea’s programme. Once it has the perceived capability of hitting the US mainland, it is probably safe from US attack–unless that were part of a war against China. Until then, at least in the eyes of President Trump, it will be a question of a war that ‘…will be over there. If thousands die, they’re going to die over there. They’re not going to die here.’

In truth, deaths might number millions, including more than 300,000 American civilians and soldiers in the region who would be vulnerable, but the principle holds good. The costs of war would be paid mainly in Korea and the immediate region, and would not be shared by the United States.

President Moon’s confidence that he can forbid the US from going to war seems misplaced.

Whilst the nuclear test was very important in demonstrating North Korea’s ability to construct an advanced nuclear device, one capable of obliterating Seoul, it was the missile test that perhaps best highlighted the foolishness and dangers of Moon’s policy.

The Hwasong-12 was not, as in previous tests, notably that of the Hwasong-14 ICBM in July, on ‘lofted trajectory’ where it would fall short of Japan, but on a standard trajectory whereby, given the constraints of geography, it had to overfly Japan.

It was sent on the safest possible course, over the Tsugaru Strait between Hokkaido and Honshu and would have been well above Japanese airspace, as a map in the New York Times makes clear.

Although the Japanese government made as much fuss as it could, stirring up public opinion with sirens, with Abe Shinzo seeing this as another opportunity to advance Japanese remilitarisation, in fact the Hwasong-12 test posed little danger to Japan.

The nuclear deterrent is a matter between the United States and North Korea.

The US threatens North Korea, despite the sanctimonious and dishonest spin from Mattis and Tillerson.

Given that its deterrent arsenal is very limited, it will focus on the United States.

Japan would suffer collateral damage, because it is part of the American war machine.

However long-range missiles are designed for distant targets – Guam and then the continental US – and not for Tokyo.

In that calculus, the more North Korea is able to strike back directly at the US, the less likely it is to waste resources on Japan.

Making use of a perceived threat from North Korean IRBMs and ICBMs makes sense for Abe because it furthers his aim of remilitarisation, revising the constitution and making Japan a ‘normal country’.

For Moon the situation is rather different. As with Japan, and for the same reasons of geography and technology, North Korean long-range missiles have no direct military significance and produce a constraint on precipitate American action.

Yet Moon’s response to the Hwasong-12 test was as belligerent as that of Abe, or of Trump. Moon had declared on 17 August that a North Korean ICBM would be a ‘red line.’ This was a particularly strange thing to do.

It is usually considered that drawing ‘red lines’ is an unwise strategy, because it yields the initiative to others.

Here it was even more foolish, because an ICBM test would be a matter of US-North Korea dynamics over which South Korea would have no control and precious little influence.

Moon’s statements demonstrated and deepened the predicament into which his failure to distance himself from the US has brought him and his country.

He is reduced to waving the American flag more vigorously than the Americans themselves and to no avail.

Trump has publicly chastised him for not being loyal enough – the charge of ‘appeasement’ towards the enemy – and has indicated that he will withdraw from the Korea-US Free Trade Agreement (KORUS FTA) and inflict various other economic and social damages on South Korea.

There is little gratitude there for Moon’s subservience.

THAAD deployment is being expanded, despite local protests and the great damage done to its relations with China. Hyundai is closing down plants in China, and Beijing appears to have made it clear that Moon will not be invited to China this year.

The meeting with President Putin in Vladivostok seems to have been polite but perhaps a little frosty – certainly there was no agreement on the North Korean issues, and Putin explicitly rebuffed Moon on oil sanctions.

The only foreign leader who seems to agree with Moon on North Korea is Abe Shinzo.

Moon Jae-in has not promoted peace when he could have, either bilaterally, such as by reopening Kaesong, or on the international stage by supporting the Chinese/Russia freeze-for-freeze tension–reducing proposal.

On the contrary, his interventions have reinforced American intransigence. His call for China to stop oil exports to North Korea was a mix of the impotent – it is unlikely that China will oblige – and the malevolent – if China did cut back it would have impact not on North Korea’s military capability but on the welfare of the people.

So far President Moon’s public support is holding up remarkably well, but then the media gives him an easy ride.

The liberal press supports him, because he is one of theirs and the conservatives, grudgingly, because he is following their programme in respect of North Korea.

But ultimately he can satisfy the conservatives no more than he can Trump, and the dissatisfaction of both will grow.

He remains popular with ordinary people, because his personal style is a refreshing contrast to that of Park Geun-hye.

Moreover in a time of crisis, people tend to rally around incumbent authority.

However it is uncertain how long Moon’s levitation can defy gravity; leaders that embody great promise on their road to power but betray those aspirations when in office can suffer a precipitate decline in popularity.
Posted by nickglais on 9/15/2017 01:28:00 AM