The Spending Review: the refined cruelty of the British bourgeoisie By Trevor Rayne 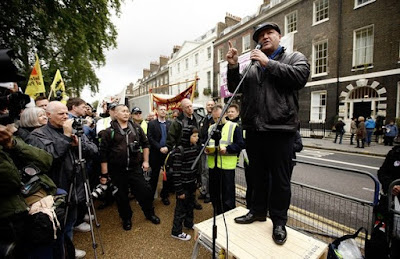 Bob Crow addresses the London anti-cuts march in London on Saturday 23 October, calling for national action against the cuts before the March 2011 demonstration to which the TUC have committed. Fight Racism! Fight Imperialism! had a lively contingent on the short march.

If you want to see what arrogance mixed with contempt looks like, examine the 20 October Spending Review in detail. This is the biggest cut in government spending since the Second World War. Nevertheless, opinion polls taken immediately after the £81 billion welfare and spending cuts were announced found that six out of ten people in Britain agreed with the Coalition government that it was right to cut public spending. This is testimony to the success of the media campaign repeatedly drumming out the same message: Britain has to reduce its budget deficit. As befits a Cabinet with 20 millionaires out of 23 members, this is a deceit.

Ministers focus on current public sector borrowing and say that it had gone out of control. In fact, it has been falling: the quarterly figure for April to September 2010 saw public sector net borrowing of £73.5 billion compared with £77.4 billion for the same quarter in 2009. This decrease in government borrowing was due to a rise in tax receipts, up £20.4 billion for the same period. Total, accumulated public debt as a percentage of national income is lower today than for most of the past 200 years; since 1688 it averages 112% of national income and in September 2010 it was 57.2%; below that of France, Germany, Japan and the USA. This Spending Review is not intended to save the British economy; it is an attack on the working class by a government staffed by millionaires acting in the service of the City of London. The government would never have dared to launch such an attack if it thought that there would be serious opposition, but it reckons that the Labour Party and trade union leadership will be unwilling and unable to mount serious resistance.

On top of the £11 billion cuts in welfare spending announced in June, the government presented an additional £7 billion of welfare cuts. The details are revealing: what is one to make of a government that will remove mobility cost allowances for disabled people in residential care, confining them to their homes? Or which will limit the Employment and Support Allowance given to people who are unable to work through mental and physical disability to one year, after which they must seek work, just as the able-bodied must do? This is the refined cruelty of the British bourgeoisie. Central government funding to local government councils will be cut by 26% over four years. The Local Government Association estimates 100,000 council jobs will go; many care services will end; social services for children, the disabled and elderly will stop. Swimming pools and leisure centres will shut or be priced out of reach for many people, libraries will close, streets will go unrepaired and not cleaned, garbage collection will be cut back, parks will go untended, social centres, gathering places for young and old, will be shut. Council tax benefit is to be cut by £500 million a year and remaining funds turned into a grant given to local authorities. Each authority will be empowered to decide who is eligible for the benefit. Councils will have every incentive to deny poorer people benefits and drive them away. The result will be homelessness and ghettoes. England’s social housing budget is being cut by over half. New council and housing association tenants will be expected to pay higher rents, set at 80% of market levels. They will be given short term tenancies, rather than security of tenure that current residents have. Housing benefits are to be cut. People will be driven deeper into debt, anxiety and homelessness.

Women will be hardest hit by the cuts; 65.5% of public sector workers and 75% of the local government workforce are women. Women depend more than men on benefits, and they constitute the majority of part time workers; 90,000 women work part time in the civil service compared to just 15,000 men. Being part time they are the first in line to be sacked.

University funding will fall by 40%. If universities want to continue operating they will have to make up the money by charging fees. The fees will start at about £6,000 per annum, but that will not get you much of a degree. The further education budget is being cut by 25% by 2014-15. Courses will close; universities and colleges will be merged and the market will decide which are shut down. The number of students per lecturer will soar, unless you pay fees double or treble the average fee. Millions of young people will have their horizons pushed into the gutter. Nursery places are being cut. The state pension age for men and women is to be raised to 66 by 2020, with the prospect of it rising yet further to 68 and beyond. The Treasury said that this would save £5 billion. Rail and bus travel costs will rise steeply.

Schools and hospitals, we are told, are exempted from the cuts. They will get 0.1% more money each year in real terms. This is insufficient to meet the increasing number of school pupils and the needs of an ageing population for medical care. More of the NHS will be privatised. Hinchingbrooke hospital in Huntingdon is to become the first NHS hospital turned over to a private company, with bids already in. More treatments will be restricted to those who can pay.

International capitalism is in crisis. Capitalism has no other way out of crisis than to attack the working class. The British state will begin with the poorest, but it will move on to attack the middle classes as redundancies accelerate later next year. The living standards of millions of people in Britain and around the world are being sacrificed to maintain the global position of the City, its banks, insurance companies and brokerage houses; usurers and parasites. The government says it will impose a bank levy to raise £2.5 billion by 2013. These giant monopolies will simply pass any extra costs on to customers in higher charges.

This Spending Review takes place amidst growing tensions between countries as currency wars threaten to turn into trade wars. The government says that the private sector will compensate for the reduction in the public sector and so ensure growth. This is a lie. The government estimates half a million thrown out of work by its cuts. This is another lie; towns and cities will be devastated at the stroke of the Chancellor’s pen. Already, in Middlesbrough 40% of people are officially workless, and of those in work 43% work for the public sector. Liverpool, Manchester, Bradford, Leeds, Newcastle, Nottingham – a whole swathe of cities across the north are facing mass unemployment. The ruling class and its media will try to confuse and divide us, but the reality of the attack and the suffering it causes will not be concealed. Millions of people in Britain must join the fight back and fight for socialism. If they do not, we are destined to re-run the disaster of the Great Depression of the 1930s and its culmination, World War.