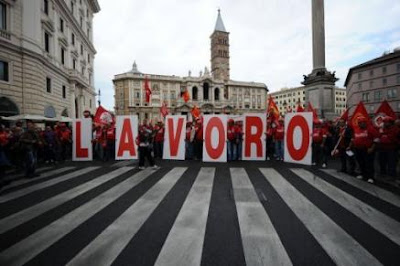 "We have to continue this battle and to continue it we need to start planning a general strike," Maurizio Landini, head of the FIOM-CGIL metal workers union, told the flag-waving crowd in a square in central Rome.

FIOM-CGIL estimated the turnout at "around one million," the head of the union's central committee, Giorgio Cremaschi, told reporters.

"We have a government that only cares about public finances," Guglielmo Epifani, leader of the leftist CGIL union, said at the rally, listing the construction and auto sectors as some of the worst affected in Italy.

"They are taking advantage of the crisis in order to weaken labour rights," he said, adding: "The social situation is very tough. The country is going downhill, it can't recover like it should. Unemployment is rising.

"We have to fight together. We need a plan for a new country," he added.

Epifani said that a general strike could be called after another protest on November 27 unless the government took action to address workers' concerns.

There were two separate marches through the centre of the Italian capital that both ended in Piazza San Giovanni in Laterano square for the rally.

Many protesters carried red flags and wore red shirts and helmets, with some holding up placards against Berlusconi and Fiat boss Sergio Marchionne

I am representing all comrades of Manipur Forward Youth Front (MAFYF) Manipur (India) and the oppress people of Manipur salute the organizing committee of Historical October 16th Demonstration for organizing such protest.

We hope for a better future and fraternal relation. Thanks