Nepal Maoists adopt Peace and Constitution Paper and Organisational Changes to distribute power and rectify overconcentration of power in the leader. 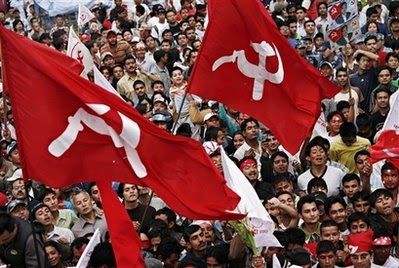 The central committee (CC) meeting of the UCPN (Maoist) Monday passed party chairman Prachanda's  aka Pushpa Kamal Dahal's political paper, which has made peace and constitution as the main agenda of the party -- apart from dividing organisational duties to key leaders.

Maoist spokesperson Dina Nath Sharma told reporters after the CC meeting that Dahal's paper was passed unanimously. The meeting, which was cancelled several times in the wake of internal rift, concluded today.

According to the proposal, senior vice chairman Mohan Baidya will head the Organisation department along with the disciplinary body while vice chairman Baburam Bhattarai will chair the parliamentary board and will be the prime minister candidate for the future government. Similarly, another vice chairman Narayan Kaji Shrestha will lead the party's team in the current government with home portfolio.

Likewise, general secretary Ram Bahadur Thapa has been given the responsibility to oversee the military commission.

The CC also gave a week's time to the office-bearers to distribute the responsibilities to other leaders.

Democracy and Class Struggle welcomes the redistribution of power within the UCPN ( Maoist) and the appointmant of Mohan Baidya aka Comrade Kiran has head of Party Organisation as well as the disciplinary body.

Please read the following commentary "Are we marching without destination ? from comrade Rishi Raj Baral
http://thenextfront.com/politics/are-we-marching-without-destination.html
Posted by nickglais on 7/25/2011 11:40:00 AM