Interview with Rahul Pandita on the Maoist Movement in India 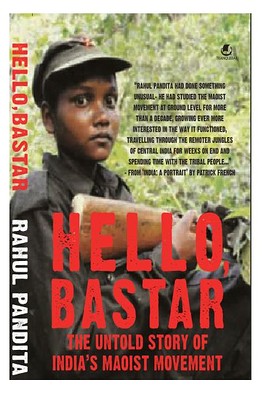 Rahul Pandita’s “Hello, Bastar: The Untold Story of India’s Maoist Movement,” looks at the evolution of the rebel group over the past ten years from a ground-level perspective. The book is the latest account of a movement that the Indian government sees as one of the greatest threats to national security. The focus is on Bastar, a region in India’s state of Chhattisgarh that has become the center stage of the struggle between the government and Maoist rebels. India Real Time talked to Mr. Pandita, a reporter at Open magazine, ahead of the book’s formal launch Thursday.

IRT: What major changes have you noticed in the Maoist rebellion between 1998, when you started covering it, and today?

Mr. Pandita: I think it has increased from strength to strength. They have expanded. Now they have a very well-trained and highly motivated army of over 10,000 men and women called the PLGA, the People’s Liberation Guerilla Army. Apart from these soldiers, they also have a secondary or “base” force. Some of them carry rudimentary weapons, and others traditional weapons like bows and arrows. In Dantewada [a district in Chhattisgarh], last year, for example, they ambushed a patrol party in which 75 policemen were killed. There were about 200 Maoists attacking. In a typical formation of 200 Maoists, about 60-70 would be hardcore soldiers from the PLGA; the rest of them will be from the secondary force. Once the CRPF personnel or soldiers are dominated, they will go and snatch weapons. So in terms of weapons, in terms of training and in terms of overall expansion, they have gained a lot.

IRT: The Supreme Court recently ruled that the state of Chhattisgarh has to stop using young tribal villagers as ad hoc police officers, known as Special Police Officers, in its fight against the Maoist movement. What impact do you think the court’s order will have on the government’s ability to quell the Maoist insurgency?

Mr. Pandita: It’s a very tricky question. It’s not a black and white situation, there are shades of grey, obviously. There are about 40,000 SPOs all over India. These are ordinary tribals between the ages of 18 and 25. They have been very poorly trained and they get a stipend of 3,000 rupees every month. They lead a police party to some villages where a lot of atrocities, a lot of human rights violations take place. In March this year, when these SPOs entered three villages of Dantewada, they burnt to ashes hundreds of huts, killed three civilians and sexually assaulted three women. After the Supreme Court order, these guys will have to be disarmed. Once they are disarmed, the state will have no policy on how to deal with them, on how to rehabilitate them. So they are virtually at the mercy of the Maoists. Once they go back to their villages, they risk being slaughtered. The responsibility now lies with the government to make sure that these SPOs are rehabilitated some way or another.

As far as their not being on the ground to assist regular police, I think to some extend it will affect anti-Maoist operations. That’s because an ordinary CRPF soldier [Central Reserve Police Force, typically deployed in insurgency-hit areas] who is coming from outside, has really no idea about the terrain. The motivation level is absolutely zero as opposed to a Maoist guerilla soldier who knows that area and the terrain like the back of his hand.

IRT: Why did the Maoists choose Bastar as the epicenter of their movement?

IRT: You met senior Maoist leaders including their head, Muppalla Lakshmana Rao, better known as Ganapathy, while you were writing the book. How was your interaction with him?

Mr. Pandita: Ganapathy is a very charismatic leader. He is from Karimnagar district of Andhra Pradesh, from a village called Beerpur. He holds a degree in science and another in education. He was a science teacher before he became involved with the movement. He was a very close associate of Kondapalli Seetharamaiah. I had a very brief chance to meet him and it happened by accident. I was traveling in that area and it so happened that he was also traveling there. I had to walk for days before I got to meet him. We had a meeting that lasted just a few hours. His core vision is to bring about a revolution and to create a state within the state.

IRT: What do you think is the best way for the Indian government to deal with the Maoist movement?

Mr. Pandita: It took many many years for the government of India to very reluctantly accept the fact that the Maoist insurgency is not just a law and order problem but a socio-economic concern. But while on the one hand they have accepted it, on the ground nothing has changed. The answer is to promote development. If the government thinks that it can be controlled by sheer force, by putting a hundred thousand men on the ground, this problem will never go away – even if the whole Maoist leadership is eliminated. It’s an issue that concerns the lives of hundreds of thousands of people.

IRT: What’s the future of the Maoist movement in India?

Mr. Pandita: I think it’s going to expand because of the kind of policies we have in these areas. On one hand, you have hundrends of thousands of tons of wheat and other food grains rotting in government godowns. As long as people keep on dying of hunger, as long as their lands are taken away, as long as they are displaced and their lives are destroyed; it’s only going to expand.
Posted by nickglais on 7/15/2011 02:08:00 PM