Elections : Ukraine's Oligarchs and Democracy for the Few : The Source of its problems projected has saviours 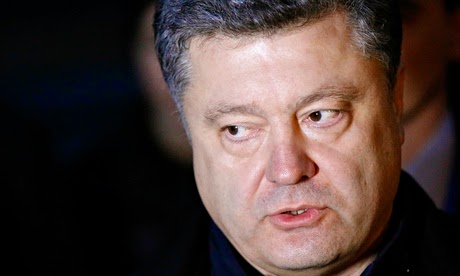 Petro Poroshenko
Democracy and Class Struggle says that Petro Poroshenko is the Oligarch that will be elected President in Ukraine's undemocratic  election has he has gained support from other Oligarchs to run Ukraine, the Ukrainian Elections are the Crowning of an Oligarch - The Democracy of Few so loved by the West.

The "Chocolate King" made his $1bn trading cocoa beans, before diversifying into media.  Leading candidate for President of Ukraine in the current elections

Poroshenko started his own business selling cacao beans. In the 1990s, he acquired control over several confectionery enterprises. Subsequently, he united his holdings in that industry into Roshen group, the largest confectionery manufacturer in Ukraine. The fortune he made in the chocolate industry earned him the nickname Chocolate King
He is Pro European Union and supported the Maidan Movement..
Petro Poroshenko  has won other Oligarchs backing to become new President of Ukraine .
Oligarch Dmitry Firtash backs Klitschko's decision to pull out of presidential race in favor of Poroshenko

Rinat Akhmetov
The richest man in Ukraine, with $12.5bn, mostly made from iron and steel and thermoelectricity. Akhmetov has smoothed over an early reputation for mixing with tough street operators.

He is the president of Shakhtar Donetsk FC. When in London, he lives at One Hyde Park.

This former supporter of ousted president Viktor Yanukovych (he once lent him his private plane) and MP for the Party of the Regions now backs the new government, calling for national unity.

His influence in the Russian-speaking East makes his support particularly important. and he has being trying unsuccessfully to mobilise his workers in Eastern Ukraine against the Donetsk People's Republic.

Ukraine's best-known oligarch, worth $3.2bn. He offered belated support to the protesters after Yanukovych fled, but then turned down the new government's request for assistance. The son-in-law of former president Kuchma treads a fine line between east and west.

This friend of Tony Blair, and one of the world's biggest Damien Hirst collectors, made his money selling steel pipes.

Claims that he has engaged in dumping (selling goods too cheaply for the purpose of undercutting competitors) in the US and Russia, and the collapse of his Russian insurance company, have depleted his fortune, but he remains the second-richest man. Pinchuk funds Blair's Faith Foundation, for his sins.

Financed Yanukovych until his downfall. His fights with opposition leader Yulia Tymoshenko over gas interests are legendary. This bruiser from post-Soviet times fought his way up from the street; he has made billions through RosUkrEnergo, a natural-resources and energy giant. Firtash regards the UK as his second home (he owns a house near Harrods with an underground swimming pool).

The founder of Privat Bank, Kolomoisky has answered the call from the new Ukrainian president to run the central Dnipropetrovsk province.

He is qualified by owning the local football team, FC Dnipro Dnipropetrovsk. He is thought to be worth $3bn.

A fierce opponent of the Yanukovych regime, he was once allied with Tymoshenko. He has put bounties on heads of what he calls terrorists in Eastern Ukraine and through intercepted telephone calls was revealed to be connected to the Odessa Massacre.

Just 28, but said to have made $2.4bn through gas sales. He used some of it to buy the football team Metalist Kharkiv. This friend of the Yanukovych family is on an EU sanctions list and has fled the country for Belarus. He says he faces no criminal charges and the corruption allegations are motivated by competitors.