GRAHAM PHILLIPS HAS BEEN RELEASED BY KIEV AFTER INTERVENTION BY BRITISH EMBASSY IN UKRAINE AFTER DETENTION FOR 36 HOURS.

Since filing this report  journalist Graham Phillips has been detained by the National Guard at a check point in Mariupol, south-eastern Ukraine.

If you know journalists get them to raise the case of Graham Phillips and protest to Ukraine Embassies so his valuable work is not stopped.

Whether it is Oligarchs like Akhmetov or  Kolomoysky they are the problem not the solution the West portrays them has being in the New York Lies.

"This union of oligarchs and Nazis comes as if descended directly from the pages of history books, as does the union of anti-fascist and anti-capitalist slogans by opponents of the Kiev junta.

It is an organization of terrorist reprisals against the working class and the revolutionary section of the peasantry and the intelligentsia. Fascism in foreign policy is chauvinism in its crudest form, cultivating xenophobic hatred against other nations,”

according to the classic definition of fascism formulated by Georgi Dimitrov.

And what is happening in Ukraine today fully fits this definition.

The owner of Privat Kolomoysky is a living symbol of financial capital. The terrorist violence of Kolomoysky’s private armies, hastily hammered together from far-right militants, was seen by all in the media" 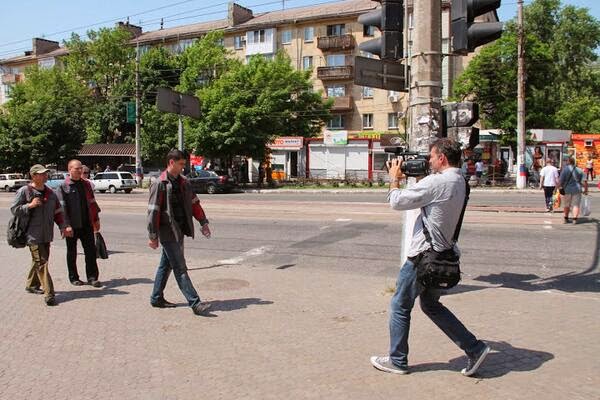 Akhmetov's 'army of steelworkers' in #Mariupol. Booked to appear by a tv company, left as soon as their slot over. pic.twitter.com/MZlJiUYB1z
Posted by nickglais on 5/20/2014 08:23:00 AM

this video posted by Nadim Mahjoub shows half a dozen steelworkers accompanied by police not evidence of hundred or thousands of steelworkers making the town secure has claimed in New York Times - these few men are acting on instructions from a corrupt Oligarch who is the one of the sources of Ukraine's problems - now dishonestly projected has being one of its saviours by the New York Times.

"Thousands of steelworkers fanned out on Thursday through the city of Mariupol, establishing control over the streets and banishing the pro-Kremlin militants who until recently had seemed to be consolidating their grip on power, dealing a setback to Russia and possibly reversing the momentum in eastern Ukraine"

The New York Times published a glowing article about the so-called “steel worker patrols” in Mariupol with the title “Workers Seize City in East Ukraine from Separatists” . But even this article was composed mainly of extracts from press releases of Akhmetov’s company Metinvest and quotes from managers and directors of the oligarch’s companies, revealing the real character of this “movement”. One line gave the whole game away: “The chief executive of Ilyich Steel Works, Yuri Zinchenko, is leading the steelworker patrols in the city.”

Clearly this was not a spontaneous movement of steel workers, but rather, one where the company had threatened the workers to participate in. The NY Times itself said it in so many words: “Yuri Ryzhenkov, the chief executive of Metinvest, which is ranked among the top five steel producers globally, said managers had been conveying to workers: ‘The most important thing you have is the steel mill. If you have the steel mill, you have jobs, salaries and stability for your families.’”