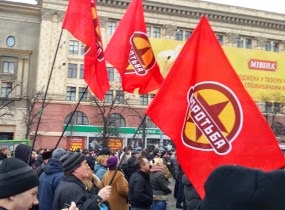 Democracy and Class Struggle says Borotba has now moved fully underground in Ukraine to continue the struggle against the fascist infested Kiev Putchists.
There has been a continuous information war against Borotba organised in the Ukraine and in the West and comrade Victor Shapinov warns comrades against falling for some of the Western organised propaganda on behalf of the Kiev Putchists in this article.
I was an eyewitness to the events in Odessa May 2, when the neo-Nazis killed my friend and fellow member of Union Borotba (Struggle), Andrew Brazhevsky. Wounded that day, Alexei Albu was repeatedly questioned by the SBU [State Security Police] -- he could have been arrested along with me and our other friends. In Kiev, the apartment of my friend, the journalist Andrei Manchuk, was searched. On the same day the Borotba office in Kharkov was seized by “men in black” who, under the pretext of searching, destroyed property -- including tearing up red banners with our symbols. Many of our comrades were forced to flee or hide. In fact, Borotba is now in an underground situation, where brutality is driving all those who dissent from Kiev’s “model.”But all of this pales before that a full-scale terrorist war unleashed against the people by the Kiev junta -- shootings of civilians and shelling of cities in the South-East of the country. Ukraine did not know anything like this since the forties of the twentieth century -- until it was reinstated by the "democratic" regime of usurpers who turned Ukrainian nationalism and neoliberalism into the state religion, threatening the Inquisition against all potential heretics.And now I feel much sympathy for those people who are up in arms to protect civilians from the neo-Nazi terror, from the private armies and mercenaries of the oligarchy and international military companies. So what if twenty years of this life under the Ukrainian authorities has taught some of them undeserved love for Putin? Let them be. The Kiev junta is the absolute evil and main threat to all democratically minded citizens of our country. Its fascist methods and oligarchic nature -- expressed in the union of far-right militants, billionaires and neoliberal officials – is obvious to all who are willing to speak honestly and drop their illusions about the Maidan, of which we have repeatedly warned Ukrainians.Among those who fought for Republican Spain were not only ideologically pure communists. It is known that among the Republican combatants you came across even former Petlyura troops. It’s enough to read "For Whom the Bell Tolls" by Hemingway to understand that to defend the Republic, people arose with different, often dubious pasts. And yet they went down in history as anti-fascist heroes. Volunteers from other countries far away from Spain fought as part of the International Brigades -- including many representatives from Western Ukraine. And General Franco’s fascist propaganda called them "Stalinist tourists," "saboteurs" and "terrorists" too.There is no doubt that 99% of militia soldiers in the South-East are local citizens of Ukraine. Probably more than half of them are ethnic Ukrainians. But now, as we fight for democratic freedom and against the revival of fascism, it does not matter who they are or where they are from. It does not matter because what we are seeing is not an internal Ukrainian matter. This is a civil war in the former Soviet space, in all of our artificially divided country. And in this war liberal Moscow holds one front against Tyanabok and Yatzenuak, while the communists hold another – with the resistance of the South-East.The categorical imperative for any anti-fascist today is the following thesis: all that is now part of the struggle against fascism and social racism in Ukraine is good; all that counteracts its destruction, even under the most specious pretexts, is evil and aiding the enemy. It is not so much a theoretical conclusion as a practical one, based on our own experiences and those of our comrades, each in very difficult environments, fighting against the most aggressive right-wing regime in postwar European history.
Victor Shapinov