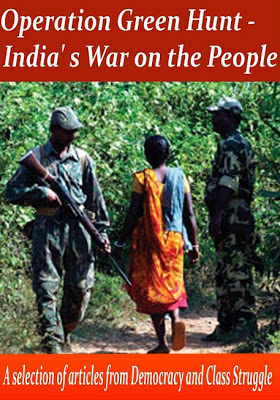 The International Meeting in support to people’s war in India on the occasion of the 10th anniversary of the formation of the CPI (Maoist) has been successfully held. It was attended by delegates and representatives of political parties and organizations from Brazil, Turkey, Germany, Galicia, France, Austria, Italy, Netherlands. Messages was sent from Canada, Spain, Afghanistan (Party and organization), Sri Lanka, France (another organization), Greece. A report about the action of Maoists in Tunisia in support to the PW in India has been presented. The joining the International Committee by the Network of Communist Blogs and another celebrating initiative in Ireland have been announced.

The meeting realized a large unity in the support to the people's war in India and resounded a strong Lal Salaam! to the Communist Party of India (Maoist), the Indian masses, the People's Liberation Guerrilla Army, the leaders and cadres of the CPI (Maoist). It expressed a strong appreciation for the initiative taken by the International Committee, important in the world, in conjunction with the celebrations in India, in the fire of people’s war against the suppression campaigns by the Indian regime and imperialism.


The meeting took place over two days. It was first opened with a salute to the martyrs of the Indian revolution and the Communist Party of India (Maoist).


After a brief introduction of the Committee and the singing of International, there was the reading of the great message addressed to the meeting by the CPI (Maoist), welcomed with applause and excitement.

Then the International Committee, in its report, explained how the support to the people’s war is broadening and deepening the popular support for the war, from its birth to the International Days, to the successful International Conference in Hamburg, organized with the League Against Imperialist Aggression (BGIA) and the participation and support of political parties, organizations, solidarity committees; how this initiative continued and how it contributes to oppose the Operation Green Hunt, to the solidarity with political prisoners, to the support the people's war, by understanding how important the PW in India is in the struggle between imperialism and proletarians and peoples and how it affects the balance of power in the world, how much it contributes and shows the way for the anti-imperialist and liberation struggles of the peoples and how it helps the unity of the Maoist communists, anti-imperialist, democratic and progressive forces; and, finally, how it is a delimitating expression of proletarian internationalism. For this reason, the action of the Committee and the international support for the PW, are today under attack by the Indian government and imperialism and considered an important "external enemy" along with the “main internal enemy” represented by the people's war led by the CPI (Maoist).


This Meeting was necessary for us supporters of the People's War, on the occasion of the 10th anniversary of the formation of the Party leading it. 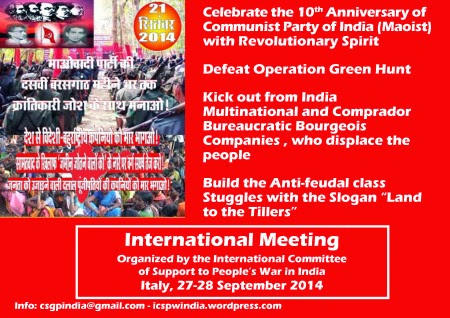 At the same time, the Committee has strongly condemned the state repression in India, that, now with the Modi regime aims to wipe out any form of political opposition and expressed solidarity with Varavara Rao and all the participants at the Forum for the an Alternative Politics, who were prevented to participate a meeting for the 10th anniversary of the Party.

Then all the attending committees, parties and organizations present made their speech, expressing their support to the Meeting and the People's War and the salute to all fighters in India, the Indian masses and the CPI (Maoist). In the speeches, this support has been connected with the burning issues of the international situation, from Ukraine to Kurdistan, from Brazil to Europe.


A strong solidarity has been expressed to the political prisoners locked up in the jails of imperialism in India and around the world. The detention of Abimael Guzman, the chairman Gonzalo of PCP, whose "speech from the cage" occurs in these days the 22nd anniversary, has also been remembered.


In the speeches there were information and assessments about the stage and problems of the support campaigns in the different countries of the world. Particularly significant were the messages from comrades in very far parts of the world, from Canada and Afghanistan, who although did not succeed, despite their efforts, to attend the Meeting, reaffirmed their support and especially their commitment to make their contribution, to provide suggestions and proposals, to strengthen the international impact of the support to the people’s war and the role of the International Committee of being a center of initiative and the vehicle for promoting and coordinating the campaign with other forces which, although are not part of the Committee, are engaged in the forefront in supporting the people's war, the CPI (Maoist) and the Indian revolution.

The International Meeting - said the Committee – does not close, but indeed opens the initiatives on the occasion of the 10th anniversary and from this podium ICSPWI has expressed together with all the attending forces greeting and support to all initiatives, messages, meetings that are held or will take place in these weeks.

The first day ended with the exciting and deep speech by the comrades of the Proletarian Revolutionary Feminist Movement, who saluted and appreciated the role of women in the People's War, the revolution, the development of the movement, the construction of genuine revolutionary parties, suggesting that women's organizations around the world take a front-line role against imperialism and the Indian regime, the regime of feudal-capitalist oppression and mass rapes against women.

The second day has seen a free debate between the participants in which they addressed issues to deepen the development of people's war, the meaning of the unity of the Maoists in the CPI (Maoist), the problems of the best political and organizational forms to develop the support to the PW.


Then the discussion turned on the current state of preparations and the function of the International Delegation that is going to challenge the Indian regime in his home and the need that it helps at the best to expose the regime of social oppression and repression and to isolate and stop the Operation Green Hunt, the repression that now hits even prominent democratic personalities of India and the Forum for an Alternative Politics. That which is going to India is a Delegation of solidarity activists of different nature, within an international campaign that will make strongly feel its  representativeness among the masses in solidarity around the world.


The majority of the participants committed to intensify their efforts to realize such a Delegation.

In an atmosphere of unity and enthusiasm “with revolutionary spirit and fervor” meeting has gone to the conclusion, hearing again the words of the CPI (Maoist) and the final part of his “call to the people of India”, which make very clear the nature and stage of the great battle going on in India:

Finally, to the words of CPI(Maoist):

“…we wish to speak about the great efforts you are doing in support of the people’s war in India. The news of your campaigns, its vivid images, are being taken to our ranks, PLGA combatants and revolutionary masses as widely as possible through our open and secret magazines and several other means. When they know that their sisters and brothers in far off lands stand up in militant solidarity with them, when they see images of protests before Indian embassies, of wall writings taking the message of their revolution to masses in those countries, their hearts swell with pride — we are not alone, our people are there, we are everywhere. Your acts have inspired us; they have made us more determined. We will strive our utmost to fulfil the confidence you have reposed in us. Our future, the future of the world revolution, the future of the world proletariat, oppressed nations and oppressed people is certainly bright but the path is a thorny, arduous and full of zigzags. The future of our enemies, the imperialists and their lackeys the world over, is dark and their doom is inevitable.”


You are not alone! We are ready to fulfill all our duties in every field ...

Lastly, a strong Lal Salaam, the singing of International and the slogans:


have closed the Meeting and cemented the success of this two days.


Participating parties and organizations (in order of speaking):


Committee of Construction of Maoist Communist Party of Galicia


Committee of Support to the People’s War in India, Galicia

Parties and Organization which sent messages (in alphabetical order):


Final Communiqué on the decisions.


The International Committee of Support to the GP in India has taken three tasks:


-          Publication of all the speeches and messages to the Meeting, as soon as possible


-          Intensify the preparation for the International Delegation.


-          To develop specific initiatives in the factories of Indian multinational companies, particularly in Europe, to create an internationalist tie between workers in the imperialist countries and Indian workers.


-          To accept the proposal to support a call for women a bridge between the women's movement and the struggle of women in the People's War.