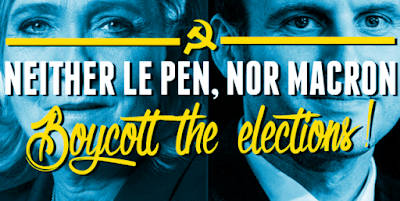 Le Pen likes to style herself as the people’s candidate, claiming to stand against closures and the labour reform ! Who in their right mind would swallow that ?

Le Pen frightens people everywhere. And while no committed activist would fall for her rants about representing the ‘people’, her heated national chauvinism, racism and homophobia spread fear, together with her entourage, the Manif pour Tous organisation opposed to same-sex marriage, which has called to vote for her, etc. Le Pen’s National Front is the basest and hardest wing of the reaction, whipping up the vilest and most reactionary elements of society.

But as the French saying goes : “fear won’t make danger go away”.

And we know full well that a simple vote won’t be enough to combat her.

And it is worth reminding those with a short memory that voting for Chirac in the second round in 2002 (WE, the militants of VP-OCML did not vote for him !) did nothing to halt the advance of the National Front.

So, whether she’s elected or not, the fight against Le Pen, the National Front & Co. must go on : fighting racism in the workplace and in our neighbourhoods ; fighting fascism and all of the fascist groups ; fighting for equal rights and combatting sexism, racism and LBGTIphobias ; fighting national chauvinism and jingoism in favour of international solidarity and welcoming migrants.

Macron is backed by everything the employers and the grande bourgeoisie push for though the State. He was the one behind all of the reforms carried out by Hollande and he has already announced his intentions for the future. A candidate who dares to say that he dislikes the word ‘drudgery’ because it gives work a bad name… Sad words indeed, and ones words the workers in the factories, hospitals, transport and public works sectors will not take kindly to !

The list of people who have pledged him their support speaks for itself, from Sarkozy and Pierre Gattaz, head of France’s largest employers’ organisation, to Valls, Hollande and Merkel : all of the people we have been fighting for decades, representatives of those who exploit us. And they have already promised the worst for the years to come !

Macron is young, dynamic and modern : the ideal representative of the bourgeoisie, the social class made up of employers, MPs, the police force and the criminal justice system and the media that condemn us to exploitation and repression in all aspects of our lives, both inside and outside the workplace.

They won’t trick is into voting for the lesser of two evils !

The media steam-roller has shifted into top gear to convince everyone to vote for Macron in order to “keep Le Pen at bay”. And all of us who call for a boycott, abstention or a blank ballot are gagged.
But we will not waver and we will make our voices heard because we know that neither of the two candidates even comes close to representing our interests.
'
They are both nothing less than candidates who uphold the same old ‘system’.

But unlike Mélenchon or the leadership of the General Confederation of Labour (CGT) who beat around the bush with empty mantras such as “keep Le Pen at bay” in order to avoid criticising those who vote for Macron, we do not mince our words, calling for a BOYCOTT of the second round, refusing to play the filthy game of tactical voting to make our votes ‘count’ (Count for whom and for what ?).

The abstention at the first round rate was considerably lower than expected with only a minority swayed by the call for a BOYCOTT which we supported along with others, thanks to the media onslaught which succeeded in making people initially in two minds about tactical voting feel guilty enough to make their vote ‘count’ in the end. Not much of a surprise there, and the result is there for all to see and for everyone to draw their own conclusions… But isn’t it about time we said no to dancing to their tune ?

We don’t want their rancid democracy !

Many of the people around us were surprised by Fillon’s score in the first round despite all of the skeletons that had fallen out of his cupboard. So much for their rancid democracy !

We witnessed an electoral campaign with littered with dirty tricks, with the farce of the primaries and betrayals, all served up with more or less loaded polls in an attempt to manipulate us.
And no sooner was the first round was over than we saw them start to tear each other to pieces, squabbling over seats in Parliament at the next general elections : in-fighting in the Socialist Party, and the Republicans, scuffles between the Communist Party and the Mélenchon, etc.

It’s time to break out from this system that they want to confine us in, telling us that if you don’t vote, you’re just standing by and letting it happen. But boycotting the elections doesn’t mean sitting around with your arms crossed : it’s the exact opposite of standing by and letting it happen ! We want to take full control over our own affairs and put an end to all of these self-styled political experts who claim to speak on our behalf.

Organise against exploitation and repression !

The militants of Proletarian Way boycotted the first round of the elections and we will do the same again come 7 May, and we call upon all committed militants to follow suit and reject the masquerade of bourgeois democracy.

We have put up with enough hardship, unemployment, job insecurity and drudgery for the sake of capitalist exploitation. We are tired of repression and violence in our neighbourhoods and during demonstrations.

It is a whole ‘system’ that we are fighting, the Capitalist system, where a bourgeois minority exploits and inflicts suffering on the working majority.

- We don’t want to put the system to rights with a new Republic and Capitalism with a human face. We want a different ‘system’, one built by us and for us.
- We want work for all, working less and differently instead of Capitalist exploitation !
- Housing is a right, healthcare is a right, education is a right !
- We want equal rights for nationals and migrants, with or without permits, straight and LGBTI people, men and women !
- We want freedom of movement and residence, international solidarity !
- We want an end to French imperialist attacks, the withdrawal of the troops and international solidarity with the peoples fighting for their rights !
- We want an end to repression and racism ! No more police violence ! No more racist crimes !

Today we need to come together and organise to build an organisation of our own to bring this system down and to build the revolution that we need. Today, the militants of Proletarian Way say to all of our comrades willing to listen that now, more than ever, the time has come to organise ! Join us !