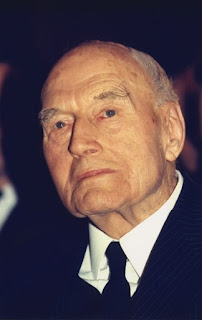 Democracy and Class Struggle is investigating the European Union and its role in promoting ethnic nationalism through the Toepfer Foundation as well as the Federation of European Nationalities which is anti semitic and promotes German as well as other ethnic nationalisms which also reinforces the "indispensable"European Super State.

The Federation of European Nationalities promotes a “law of ethnic groups” (in German, “Volksgruppenrecht”),


The use of ethnic and cultural nationalism to undermine genuine politically independent national movements for national and social liberation is an old game and one well practised by the European Union and before them by European Empires.

Alfred Toepfer (1894-1993) was an extremely successful German tycoon, an avid environmentalist, and a key influential supporter for the development of the European Union.

Toepfer made his fortune in agri-business during the fateful years of the Weimar Republic (1919-1933).  During the 1930s, Toepfer was also very loyal to the Nazi regime, even though he was never a card-carrying member.

Toepfer was particularly loyal to Heinrich Himmler (1900-1945)'s dreaded SS, the greenest faction of the Nazi Party.  Hitler put Himmler in charge of exterminating the Jews in the Baltics, Poland, Belorussia, and the Ukraine.

Hitler called the SS his "pack of wolves."  The Führer was fascinated with wolves and loved to be called "Uncle Wolf."  He used to imagine himself howling like a wolf to the frenzied crowds of Germany.

In the late 1920s, Alfred Toepfer's brother, Ernst, was the secretary of a pro-Nazi organization in New York City called "Wehrwolf."  Ernst was also working for his brother's international firm at the same time.

Alfred Toepfer was born near Luneburg Heath, a plain full of meadows, forests, peat bogs, and sand dunes in northern Germany, just southeast of Hamburg.  Historically, the Luneberg Heath was a place of nationalistic pride where rugged old style farming practices harmonized with the natural surroundings.

Throughout the first half of the 20th century, the Luneburg Heath was symbolic of a strong German character patriotically rooted in the soil of the homeland.

Indeed, after Heinrich Himmler committed suicide, he was buried in the Luneburg Heath in an unmarked grave.

The heath was also where Nazi environmentalists gathered together at the end of the war to find some solace.  Environmentalist Hans Klose, who never became a Nazi because he was married to a Jew, reorganized what was left of the German conservation movement.

He helped Nazi environmentalists graduate from the de-Nazification process with minimal difficulties.

In 1949, it was Hans Klose who said that the years 1936-1939 were the green heyday of the German conservation movement.  Earlier, three landmark Nazi environmental laws were passed (1933-35).  During the same time frame, the Nazis also implemented sustainable forestry practices called "dauerwald," which means "eternal forest."

During the postwar period, the Luneburg Heath was an environmental flashpoint between Germany and the Allies.

Not only did Nazi Germany surrender to the Allies on the heath, but the sacred ground was scarred up by British tanks, which used the southwestern portion of it for military maneuvers.

Toepfer strongly opposed the presence of the British military in the heath, but the Brits did not leave until 1994.

However, thanks largely to the efforts of Toepfer, the Luneburg Heath became the first national park of Germany in 1956.

In the early 1900s, the area was a natural sanctuary for what was called the "wandervogel"-- a German youth movement that sought a close contact with nature.  Wandervogel literally means "wandering bird."  The heath was known especially for its wild birds and recreational use.  The "wandervogel" movement, which began about 1894, was also one of the first environmentally conscious movements in Germany.

The movement provided opportunities for the German youth to explore the great outdoors with a spirit of adventure and rugged self-discipline.  German folklore, nationalism, patriotism, and an intense appreciation for nature were emphasized.  Alfred Toepfer became actively involved in the wandervogel movement in 1913.

While the Hitler Youth later replaced the wandervogels during the Nazi regime, one could also easily argue that the SS itself was a "grown up" version of the wandervogel movement.

The SS strongly promoted a "back to the land" ideal throughout the 1920s and '30s.

They wanted to biologically rejuvenate Germany's health by returning people back to the natural German soil, and away from the artificial Jewified international cities that were allegedly corrupting Germany's blood.

The SS called its back to nature policy "blood and soil."  SS leaders Heinrich Himmler, Richard Walther Darre, and Rudolf Hoess were all involved in a wandervogel group called the Artamanens, where much of their ideology was developed.  Darre was Hitler's agricultural minister from 1933-42.  Rudolf Hoess was the infamous commandant of Auschwitz.

Alfred Toepfer was also a "blood and soil" enthusiast.

Alfred Toepfer continued to be a nature-lover until the day of his death.  He was the chairman of the Nature Park Society 1953-1985, where he helped develop many new nature parks for Germany from the North Sea to the Alps.

His efforts at the Nature Park Society were greatly expanded for all of Europe under the rise of the Europarc Federation, an association which Toepfer's foundation still supports.

In 1981, the Alfred Toepfer Academy for Nature Conservation (NNA) was established.  It is a state institution that emphasizes sustainable development and environmentalism.  Its main office is located at an old farmstead  named Hof Mor in the Luneburg Health itself.

Even Toepfer's most prestigious academic prizes and scholarships that he financed are named after men foundational to the German green movement.  The Hanseatic Goethe Prize, dedicated to outstanding European scholarship, is named after  Johann Wolfgang von Goethe (1749-1832).

The German word "volk" means "people" with certain racial connotations.  Humboldt believed that the character of the volk is shaped by geography and climate so that man becomes indigenous to his own environment.

As the 1800s progressed, the racial element became more and more emphasized by many German thinkers along with a nationalistic view of the land itself.  When this concoction mixed with evolutionary theory, an Aryan Social Darwinism was born, which later became the biological bread and butter of National Socialism.  By the early 1900s, race, indigenous ethnicity, and a love for nature became very popular in German culture, especially among the wandervogels.

Toepfer's academic philanthropy paid handsome dividends over the years.  Both British and German scholars have been reluctant to admit the full force of Toepfer's National Socialist past.

Yet it was precisely during the Nazi regime that Toepfer began funding academic awards to European foreign students with much help coming from the infamous Joachim von Ribbentrop (1893-1946), Hitler's foreign minister.

Toepfer's loyalty to the SS continued after the war.  He later employed notorious Nazis like SS Brigadier Edmund Veesenmeyer, Kurt Haller and SS Major General Hans-Joachim Riecke, all of whom were responsible for hundreds of thousands of atrocities committed during the war.

Much is made of the fact that Toepfer was arrested by the Nazis in 1937 for foreign currency violations that were forbidden under the Aryanized National Socialist economy.

However, Toepfer was finally released thanks to his SS patronage together with the personal intervention of Hermann Goering (1893-1946), the second-most powerful man in Nazi Germany at the time.

After a thorough investigation paid for by the Alfred Toepfer foundation, Mommsen concluded that he was "a model European."

Nation and State and FUEV

The Nation magazine and State was subtitled German Journal of the European minority problem and the publisher Braumüller published in Vienna.

It is an organ of the European Congress of Nationalities considered.

Its first issued in 1927 and was edited by representatives of German minorities from different European countries.These included Jacob Bleyer , Rudolf Brandsch , Paul Schiemann and Johannes Schmidt-Wodder .

From April 1933 the editorship was at the Association of German ethnic groups in Europe . After the annexation of Austria to Germany in March 1938, the editorial staff was moved from Vienna to Berlin.

Then was In October 1942 Werner Hasselblattsole publisher. The magazine was set in November 1944 after the release of the 17th vintage.

Even before the annexation of Austria and even before the advent of Hitler were in the magazine Nazi and anti-Semitic articles published, among others, Norbert Gürke . "The people", was read in 1932, " by blood and culture unit."

The Austrian "concept of nation is a necessary consequence of the intellectual world of democracy, mechanical Auszählens the many peers, of individualism and rejection of racial and ethnical division of humanity.

All this serves the pursuit of Judaism for equality, exploitation and domination."

As a continuation of nation and state Braumüller published in 1958 a special edition " Europe Ethnica . Journal of the Federal Union of European Nationalities(FUEV) ."