India: From Pune to Hyderabad to JNU: Campuses turn battlegrounds? ABVP acting as fifth column for BJP Government in crackdown

On February 9th 2016 some students of JNU organised a programme against the execution of Afzal Guru on his death anniversary. At first, the organisers were given permission by the JNU authorities, but then it was withdrawn after right wing students group ABVP pressured the administration against it.

The organisers decided to go ahead with an art and a photo exhibition, depicting the life of ordinary Kashmiris under military occupation and highlighting their struggle, rather than a protest. ABVP showed their true character by trying to disrupt the programme.

The corporate media too, followed their footsteps condemning the organisers of the event as anti-nationals. Right wing groups and the media blamed the students and accused them of raising slogans such as "Pakistan Zindabad" and "Bharat ki barbadi tak jung jari rahegi."

The media left no stone unturned in spreading the jingoistic hysteria by condemning the event as anti-India.

The students union president Kanhaiya Kumar clarified that such slogans were made by ABVP activists in order to sabotage their event.

However, the government was quick to take action against the students who participated in the event and filed sedition charges against Kanhaiya Kumar, Umar Khalid and several others. Kanhaiya Kumar was arrested on 12th February by Delhi police.

This is a direct attempt to curb freedom of expression and freedom of speech in university campuses. The Sangh organisations and their associated groups are trying hard to suppress voices of dissent in university campuses all over India. It is well known how Indian security forces have committed atrocities against Kashmiri people with impunity and are continuing to do so.

The court awarded capital punishment to Afzal Guru based on circumstantial evidence. The Indian judiciary carried out the execution in a covert and cowardly way and didn't even hand over his body to his family members. Speaking against such atrocities committed by the state is the right of every citizen. To tag the students as anti-national and registering sedition charges is atrocious and highly condemnable.

The Indian state is following the same sedition law that British imperialists used in order to crush any dissent that threatened their authority. United Students Democratic Front (USDF) strongly condemns action taken by the government against JNU students and organisers of the event and demands dropping of sedition charges against Comrade Kanhaiya Kumar, Comrade Umar Khalid and others unconditionally 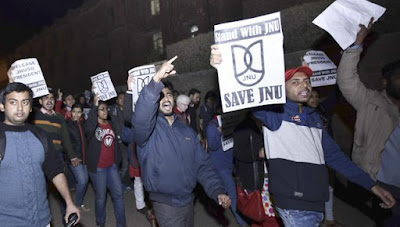 Peoples Union for Civil Liberties (PUCL),Delhi condemns the action of Delhi Police  in arresting JNUSU President on charges of sedition.

It is shocking that the Delhi Police has arrested the President of the Jawahar Lal Nehru University Students Union (JNUSU) on the charges of  ‘sedition’ –a provision of law about which  Jawahar Lal Nehru, the first Prime Minister of India, had said in 1951,     “Now as far as I am concerned that particular Section is highly objectionable and      obnoxious and it should have no place…in any body of laws that we might pass. The sooner we get rid of it the better.”

The provision of section 124-A of the Indian Penal Code, which provide  punishment for ‘sedition’ was enacted by the British to silence all opposition to its autocratic rule. This provision had been used  by the British against  Bal Gangadhar Tilak,  Mahatma Gandhi, M.N.Roy, Maulana Hasrat Mohani,   and many other freedom fighters.

It is unfortunate that the governments in free India have been misusing this  anachronistic  colonial era law  from time to time  in order to silence the voices of dissent.  The human rights organizations, especially PUCL, for many years have  been campaigning  for its repeal.

The action of the Delhi Police is  also in violation of the law laid down by the Hon’ble Supreme Court in the celebrated case “Kedar Nath Das  Vs. State of Bihar” (AIR 1962 SC  955) which held that “…comments, however strongly worded expressing, disapprobation of the actions of  Government, without exciting those feelings which generate the inclination to cause public disorder by acts of violence, would not be penal.”

It appears that there was no intention on the part of the President of JNUSU to  incite violence and therefore the action of the Delhi Police in arresting him is condemnable.  PUCL appeals to the Home Minister (Central Government)  to instruct Delhi Police to release the arrested  leader immediately.

The governments should remember what Gandhi said in 1922 in his trial for sedition, “ Affection cannot be manufactured or regulated by law”. 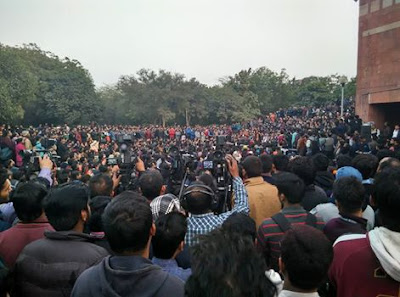