Aravindan Balakrishnan : Maoists disassociated themselves from his activities and refused his followers entry into Maoist meetings 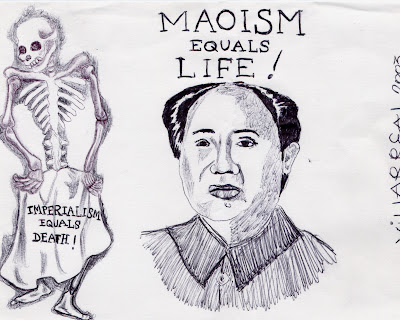 Democracy and Class Struggle says Aravindan Balakrishnan the man at the centre of the slavery scandal in Brixton was expelled from Communist England in 1974 and set up a cult around the Workers Institute.

Other Maoist groups were to shun the Workers’ Institute, disassociating themselves from its activities and refusing them entry into their meetings. Aravindan Balakrishnan was generally regarded as a nutter by London Maoists.

Today the British capitalist media are enjoying themselves linking Maoism with Slavery - whereas the reality Maoism liberated millions if not billions from capitalist slavery and continues to do so to this day.

If you want to find out what Maoism is - here is a reading list for you:

If you don't want to know then remember the African Proverb I  strongly recommend anyone with an interest in Mao Zedong to buy it and read it.

Understanding Mobo Gao's Mao Zedong will help people better understand why People all over the world hold Mao Zedong in such high regard as one of the 20th Century's great leaders and thinkers.

Apart from new information on the Great Leap Forward and the Cultural Revolution that will help clear up distortions of Mao's position on these events.

There are two chapters on the Electronic Media and the Information on Chinese Bloggers and Chinese Websites that have become vehicles for a vigourous defence of Mao Zedong by participants in the Great Leap Forward and the Cultural revolution whose memories while erased from "official history" have surfaced on the internet.

It deserves to be read by millions has an antidote to Jung Chang and Li Zhisui but it will not be promoted by the BBC or Al Jazeera and the US government has Jung Changs Book was - just by honest readers who place a premium on the truth.
.