Contradictions in China - Is a new direction emerging ? 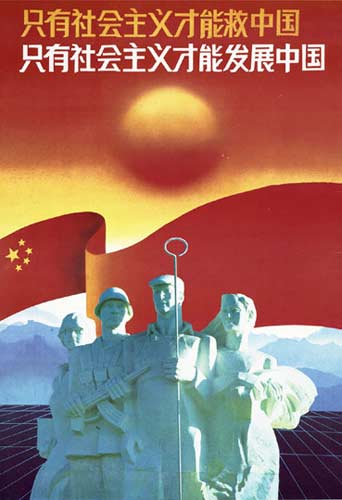 
Democracy and Class Struggle has been observing the shoots of a new strategic direction by the Communist Party of China under its new leaders has it faces a more overt than covert "Strategy of Tension" from US Imperialism.

I do not wish to overstate the new direction or its implications has it is early days, just to draw attention to it, we will study these developments in more detail in the coming months and examine some of the contradictions forcing this new direction on the new Chinese leadership.

Only Socialism can save China has the poster above says.

I suggest study of the article by Fred Goldstein below and watching of the following video of China's resistance to Trans Pacific Partnership here :

Back in January, Xi Jinping acknowledged that “some” party members have become “degenerate and corrupt,” although he said in a speech a month earlier that the problem is “Westernization and bourgeois liberalization.”

Mr. Xi Jinping has implored party officials at all levels to revive their commitment to Marxist-Leninist values and not follow the former Soviet Union, whose Communist Party collapsed, he said, because “they denied Lenin, they denied Stalin. Everything was denied. It led to historical nihilism and ideological anarchy".

The new head of the Chinese Communist Party and president of the People’s Republic of China, Xi Jinping, is reported to have made a private speech to party leaders during a recent trip to southern China. In it, he denounced Mikhail Gorbachev, the Soviet leader who opened the door to the counterrevolution and the collapse of the Soviet Union. Xi reportedly pledged never to follow that road.

This speech, which has not been published in English, caused deep disappointment in imperialist circles.

While it has been acknowledged in a front-page article of the New York Times and referred to in Businessweek and other capitalist publications, the ruling class is being relatively quiet about it, trying to remain optimistic about the prospects for deepening bourgeois political reform in China.

“Deepening political reform” is a code phrase for opening up the political process for bourgeois or petit-bourgeois political groupings, either outside or inside the Chinese Communist Party, that want to restore capitalism and break up the CCP. To the imperialists, gaining capitalist political power is even more important than market reforms, because it would lay the basis for destroying the foundations of the Chinese Revolution.

Xi on collapse of USSR

Reporting on Xi’s speech, the New York Times of Feb. 14 said: “Despite decades of heady growth, Mr. Xi told party insiders during a visit to Guangdong Province in December, China must still heed the ‘deeply profound’ lessons of the former Soviet Union, where political rot, ideological heresy and military disloyalty brought down the governing party. In a province famed for its frenetic capitalism, he demanded a return to traditional Leninist discipline.”

It quoted from a summary of his remarks reportedly circulated among party officials: “Why did the Soviet Union disintegrate? Why did the Soviet Communist Party collapse? An important reason was that their ideals and convictions wavered. …

“Finally, all it took was one quiet word from Gorbachev to declare the dissolution of the Soviet Communist Party, and a great party was gone.” Xi spoke of how some of the party leaders had Gorbachev arrested, but “Yeltsin stood on a tank” while the army stood by and did nothing to defend the party and the USSR.

The Times picked up the summary of the speech from a blog published by a counterrevolutionary, Gao Yu, who works with the German radio station Deutsche Welle. (Beijing Observation: Xi Jinping, posted by Yaxue Cao, Jan. 26)

Gao, who was twice imprisoned for supporting the pro-capitalist counterrevolutionary uprising at Tiananmen Square in 1989, has connections in China and published commentary and excerpts from the speech. According to the Times, the speech has been vetted by Chinese officials and others and is said to be authentic.

Gao quoted Xi as saying, “We must see clearly our place in history, see clearly the realistic goals as well as the long-term vision to which we are devoted. We are still in the early stage of socialism, and we must do whatever we can to realize the goals of the current stage. But if we lose sight of our vision as communists, we will lose our direction and succumb to utilitarianism and pragmatism. To uphold our ideals and beliefs, we must uphold Marxism-Leninism, Mao Zedong thoughts, Deng Xiaoping theory, the important contribution of the ‘three represents,’ and the Scientific Outlook on Development. The great renewal of the Chinese nation has been the greatest dream of the Chinese nation over the last couple of hundred years. The ‘China dream’ is an ideal. But of course, as communists, we should have a higher ideal, and that is, communism.”

Gao complained that Xi did not mention “political reform” once during his southern tour. This counterrevolutionary’s interpretation of the Xi speech was that it “was clearly intended to give the CCP ideology a renewed status,” meaning the official ideology of China, which is socialist, all the capitalist reforms notwithstanding.

The Times article mentioned that in one speech on the tour, Xi said that

“Mao Zedong’s era of revolutionary socialism should not be dismissed as a failure.”

The Times further pointed out that Xi has pledged to pursue “economic reform” but that “he won’t become a Gorbachev.”

We have no way of verifying the accuracy of the quotations and paraphrases from the speech. Nor can the revolutionary and progressive forces around the world, based on the workers and oppressed, get a true estimate of the relationship of forces in China between the right wing and the center, or what influence the left has. Furthermore, many details of the speech require critical examination.

But a few things are clear. There is enough pressure coming from the right to bring the hypothetical prospect of counterrevolution to the level of consciousness and discussion of the top leadership. A time of change in leadership, before the leaders get drawn into the all-consuming vortex of day-to-day responsibility for running the country, lends itself to trying to see China’s development within a broader perspective. It is in this context that Xi is going over in his mind the disastrous Soviet scenario in order to draw from it the lessons for China.

But it is dangerous for Xi to reduce the reasons for the collapse of the USSR to liberalism in politics, ideological deterioration, and the indifference and opportunism of the military.

Bourgeois forces — like those that were nurtured underground over many decades in the USSR in an atmosphere of bureaucratic privilege, got seduced by the material prowess of capitalism and were intimidated by relentless imperialist threats — are now operating completely above ground in China. Furthermore, while the proletariat was politically pushed out of the running of society in the USSR, the same can be said for the workers of China.

Being for “economic reform” as the route for developing China is to put the development of the productive forces above the development of socialist social relations. It means putting material accomplishment above class consciousness, class solidarity and the empowerment of the masses. This is precisely what present-day China has in common with the former USSR — despite the vast differences.

This is what led to Gorbachev. Only by putting an end to this orientation, begun by Deng Xiaoping after the defeat of the left, can the Chinese Revolution be revived and secured.