“The Filipino people will not forget the long history of US armed intervention in the Philippines, including the war of aggression and occupation at the turn of the 20th century which saw the massacre of close to half a million Filipinos” -- Communist Party of the Philippines


The Communist Party of the Philippines (CPP) today cited pictures taken by Reuters photographer Romeo Ranoco and published on the Yahoo! News website (http://ph.news.yahoo.com/photos/balikatan-exercise-slideshow/) and other outlets clearly showing that so-called joint military exercises between the US military and Armed Forces of the Philippines (AFP) are geared towards US involvement in local counter-guerrilla operations in the Philippines. 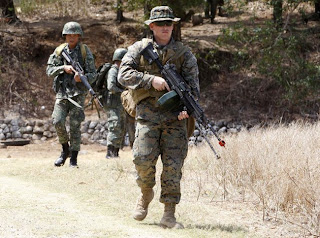 The pictures were taken on 19 April in Ternate, Cavite where a contingent of American soldiers engaged in war games with Filipino troops are shown portraying situations of armed engagement against the NPA. Several pictures show American soldiers engaged in mock ambushes against NPA fighters. One of the captions read: “US soldiers inspect a Filipino soldier portraying a communist rebel killed in an ambush during a Philippine-US troops joint military exercise…”

“Clearly, Aquino and his military spokesmen are lying when they claim that the Balikatan exercises are only meant to boost the external defense capabilities of the Philippines,” said the CPP. “These pictures explicitly show American troops engaged in counter-guerrilla war games to situate themselves more squarely in the fascist war of suppression against the Filipino people and their army.”

“It is plain to see that the Balikatan war exercises are meant to increase the inter-operations capability of the US military and AFP to engage in internal domestic counter-guerrilla combat operations in the Philippines,” added the CPP. 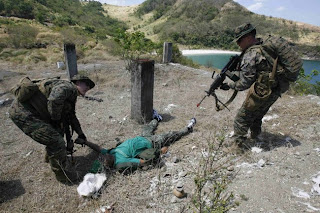 “The Filipino people will not forget the long history of US armed intervention of the Philippines, including the war of aggression and occupation of the Philippines at the turn of the century which saw the massacre of close to half a million Filipinos by American soldiers,” said the CPP. “Heightened US military intervention and the outright puppetry of the Aquino regime compel the Filipino people to raise high the banner of patriotism and intensify their armed struggle for national and social liberation.”

“The US military and security establishment has long been engaged in counter-guerrilla operations in the Philippines,” said the CPP. “In fact, the Counter-insurgency Guide of 2009 issued by the US Department of Defense served as the blueprint and framework for Aquino’s Oplan Bayanihan war of suppression, which underscores the need to step up psychological warfare and publicity stunts to cover up the brutalities of the AFP’s military operations.” 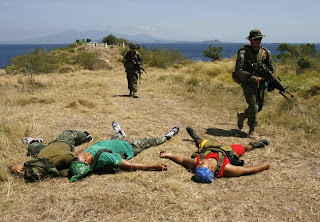 “The 700-strong Joint Special Operations Task Force (JSOTF-Philippines) based inside Camp Navarro in Zamboanga City has since 2002 served as the US mainstay in the Philippines engaged in various forms of counter-guerrilla, psywar and civil-military operations,” said the CPP. “For a decade now, US soldiers have been embedded in AFP units engaged in combat operations, serving as field advisers and stationing themselves in AFP tactical command posts, providing logistical support as well as satellite- and drone-fed intelligence information.”

“There have been numerous sightings of American soldiers in AFP counter-guerrilla field operations,” added the CPP. “Most recently, the US was involved in combat operations in Basilan where American military advisers guided AFP soldiers who dropped US-made ‘smart bombs’ on a supposed terrorist lair.”
Posted by nickglais on 4/22/2012 01:37:00 AM