Rafael Correa on Lenin Moreno "everything he says is a lie, he's a cynic and a pathological liar." 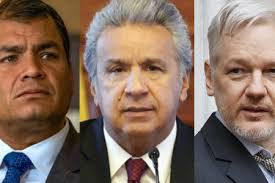 
The former president of Ecuador, Rafael Correa, accused his successor, Lenin Moreno, of having "turned over the US" to the founder of Wikileaks, Julian Assange, who was detained at the British embassy in London by British police.

After the elimination of the political asylum of the journalist by the Ecuadorian government, Correa said he felt "shame" for the words of the current president, who said he has removed "a stone from the shoe."

"To abandon a citizen of the world to whom asylum has been given is to betray the very foundation of the sacred institution of asylum, which is to prevent it from going to the hands of those who required it," Correa said.

The former head of state said that after listening to Moreno's statements he felt "nauseated" because, he said, "everything he says is a lie, he's a cynic and a pathological liar."

For Correa, the government has committed a "scoundrel" and a "betrayal" by giving Assange to "his executioners", for Washington, which requested his extradition. In addition, he noted that they have not presented evidence about the crimes that are committed to the journalist, such as having stolen documents from the Ecuadorian embassy, ​​or intervening in communications.

"Ecuador had the responsibility of guaranteeing the asylum of Julian Assange, even more since he obtained Ecuadorian citizenship last year." According to our Constitution, an Ecuadorian citizen can not be extradited, "said Correa.