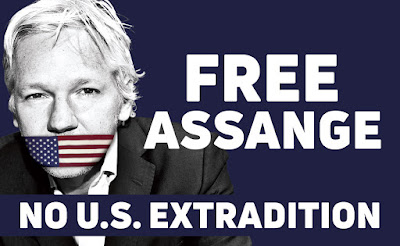 Julian Assange’s arrest: The UK is doing the US’s dirty work by persecuting a man who exposed war crimes

London – Wikileaks founder and international whistleblower Julian Assange must not be extradited to the United States following his arrest and forceful removal by the Metropolitan Police, upon request by the Ecuadorian Embassy, where he has been seeking refuge for the last 7 years.

The work that Assange and Wikileaks produced has reshaped the debate about the abuses of powerful states, especially the US, in the context of the War on Terror. Without such courageous work, the awareness of unspeakable crimes, let alone the small semblance of accountability that we have seen, would have never happened.

“This is a witch hunt against whistleblowers and those who are seeking accountability from the powerful. The UK-US extradition treaty which has always been ripe for abuse, will be used once again to silence voices of dissent.”

“Assange must not be extradited to the US. He is a truth-teller and one that has sacrificed his own liberty to shed light on the abuses of the world’s most powerful states. If no one is above the law as Sajid Javid boasted, then surely we should be supporting Assange not arresting him.”