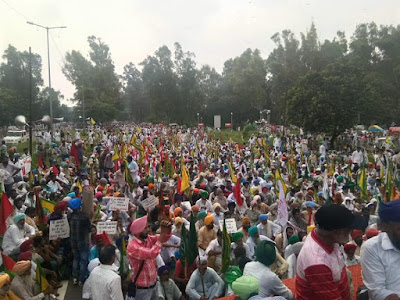 HAIL THE DEATH DEFYING COURAGE OF ACTIVISTS OF 45 MASS ORGANIZATION SIN PUNJAB IN STATE CAPITAL OF CHANDIGARH TODAY SHIMMERING THE SACRED TORCH OF RESISTANCE WHICH SHOULD BLAZE ACROSS THE ENTIRE NATION TO EXTINGUISH THE MONSTER OF FASCISM.PARTICIPANTS IN RALLY REPRESENTED EVERY SECTION OF THE BASIC MASSES CREATING A RED LETTER DAY IN THE STRUGGLE AGAINST FASCIST TYRANNY.

Red salutes to protest rally in Chandigarh against fascist arrests of 5 activists.Protestors marched from Mohali to Chandigarh before being blocked by police barricade..Protest resembled an ocean and the turbulence of a thunderstorm .Event will carve a permanent niche in the history of resistance against fascism.15,000 people attended .45 organisations participated representing peasants, workers, youth,students,women and government employees.

History was written today in the glorious resistance against the tyranny of fascism.May the spirit of this rally blaze like a great fire all over the nation to extinguish fascism.Speakers included Jagmohan Singh of Association for Democartic Rights,Raminder Singh of Naujwan Bharat Sabha,Sukhdev Singh Khokri of Punjab Kher Mazdoor Union and several other leaders like Nirbhay Singh Dedhuke,Karmjeet Etc.

Of great significance when the Indian nation is facing the concrete threat of fascsim .Noteworthy was the manner and extent to which the working class and peasantry of Punjab understood the relationship of the arrests of democratic activists with the supression of revolutionary democratic struggles of oppressed masses as a whole.Great class consciousness was displayed,particularly by the landed and landless peasantry.

Speakers explained the fascist nature of Operation Green hunt and of the arrest of the political prisoners and summarized how the ruling BJP party banged every nail in the coffin to supress legitimate struggles of every section of the toiling policy and promoted an economic model that denied the broad masses the basic requirements like food and shelter.A tribute to the great energy invested by the leaders and activists of the mass organizations.Very significant that so many diferent trends of mass organizations related to the communist revolutionary camp participated .

The Police barricade intervened and ultimately blocked the rally which is an accurate reflection of the political olrientation of the ruling classes.The faces of the participants of the rally reflected the aspiration s and anger of the opressed masses of India as a whole