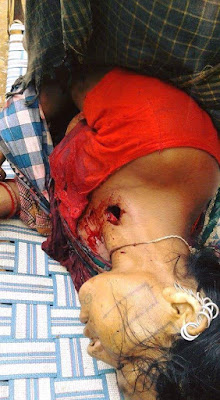 Do these Tribals in any way look like Maoists? These two along with other 15 Tribals were killed by the Indian police at Chattisgar's Sukma district. The police say that these people are the CPI (Maoist) cadre. The police claim that the women in the pic below is also a Maoist, who was wounded during the fire exchange and caught by the police while escaping into forest.

The truth is that they are all Tribal youth. The whole country believes that all are naxalites, but according to sources from Kistaram Village the truth is something else.


The idea behind this Masacre is to create a fear in the Adivasi community, so that they will keep themselves away from sympathizing CPI(Maoist).

This will in turn help the MNC's to progress on their Trillions of Dollars worth MOU's.Condemn this ruthless massacre of Adivasis by the police symbolic of the fascism prevailing in the nation as a whole .

The State bangs every tooth and nail to destroy the backbone of any movement of the oppressed masses and blesses the tyranny unleashed by the corporates on tribals.

This is not an encounter but cold blooded murder.

Perfect illustration how the state uses the pretext of the Maoist movement to crush any democratic section or movement. 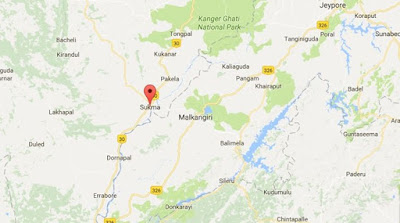 
SUKMA: Fourteen Naxals were on Monday killed in an encounter with security forces near Sukma's Konta and Golapalli police station limits.

Sixteen weapons have been recovered from them. The gunbattle took place on Monday morning in a forest area in south Sukma, around 500 km from Raipur, Deputy Inspector General (anti-naxal operations) Sundarraj P said. Search operation is underway.

There have been at least two encounters in the first week of August itself in Chhattisgarh. Chief Minister Raman Singh had appealed to Naxals to surrender and join the mainstream warning that the security forces were ready to "finish" them. Singh said that due to the action by security forces, the state was heading in the direction of finishing the Naxal menace.

"The state government has given a strong message to Naxals that they should join the mainstream. Either they should surrender or security forces are ready to finish them. Now there is no way left for them," Singh had said. He also urged the tribal population in the state to support the government to get rid of Left Wing Extremism.

Earlier on August 3, one naxal was killed and two policemen were injured in an encounter at a weekly market in Bijapur in Chhattisgarh. The encounter took place when a police team was patrolling the area to ensure protection to the weekly market.

"A group of 15 to 20 naxalites, dressed as civilians, opened fire on two jawans and also attacked them with sharp weapons in a bid to kill them and loot their weapons, like in the previous attacks committed by ultras during the weekly markets," Bijapur Superintendent of Police Mohit Garg had said.

On August 1, a CoBRA (Commando Battalion for Resolute Action) jawan was injured in the blast of an improvised explosive device (IED) triggered by Naxals in Chhattisgarh's Bijapur district.

The incident took place under the limits of Basaguda police station when a team of CoBRA battalion -- an elite unit of the CRPF -- was out on a `search-cum-area domination' operation. The team had set out from Sarkeguda. The IED went off when it was cordoning off a jungle in the area.