Kevin “Rashid” Johnson has been moved to Red Onion State Prison in Virginia. His lawyer’s office received a letter from him sent from Red Onion on Saturday. 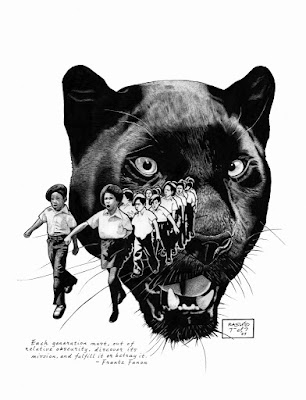 Democracy and Class Struggle says our comrade Kevin"Rashid " Johnson is in danger again he has been returned to Red Onion State Prison where he faced serious abuse in the past.

Demand he be given his property and removed from Solitary confinement and not be abused,


Kevin “Rashid” Johnson has been moved to Red Onion State Prison in Virginia. His lawyer’s office received a letter from him sent from Red Onion on Saturday.

All Rashid’s property was transferred with him, but the Virginia Department of Corrections (VADOC) confiscated it and won’t give it to him. He has none of his legal materials, no reading glasses, no medications, nothing. This is in a situation where he has litigation deadlines coming up in lawsuits regarding mistreatment in the Oregon and Texas prison systems.

The prison administration had him placed in a pod with all empty cells, totally isolated. They have him in the wing of the prison created to cause sensory deprivation (B-3 pod). Rashid wrote about B-3 pod eight years ago in his article Abu Ghraib Comes to Amerika: Torture Unit under Construction at Virginia’s Red Onion State Prison.

Indeed, this is not the first time Rashid has been in the Virginia prison system – despite having spent years in Oregon, Texas, and most recently Florida, he has in fact always been classified as a Virginia prisoner. From 1995 to 2012, Rashid was held at Wallens Ridge and Red Onion State Prisons, in various degrees of solitary confinement. Through correspondence, he worked to educate his peers while also reaching out to activists on the outside. Much of the correspondence during this time would form the basis of his first book Defying the Tomb, published in 2010.

In 2011, Rashid wrote a series of articles about a new isolation unit being opened at Red Onion, and about ongoing guard abuse that included a “pain-compliance technique” that involves bending prisoners backwards, to the point that they would sometimes break. At the same time, he became well known as the artist who drew the drawing that would serve as an unofficial logo for the historic California hunger strikes that year.

When guards retaliated by beating Rashid, dislocating his shoulder and tearing his dreadlocks out from his scalp, outside supporters attempted to mobilize to protect him, while calling attention to the abuses he had been documenting for years.

In an attempt to pre-empt an embarrassing situation, the Virginia Department of Corrections had Rashid first transferred to Wallens Ridge – where he was openly told by guards that they intended to kill him – and then, in mid-February 2012, he was moved once again, this time out of state.

Using something called the Interstate Compact, VADOC spent the next 6 years moving Rashid from one state to another. First Oregon, then Texas, then Florida – in each new location, Rashid set about documenting the abuse that he and other prisoners were subjected to. Indeed, besides political theory, the bulk of Rashid’s writings and work have been attempting to protect or seek justice for those most vulnerable behind bars – those prisoners whose physical and emotional health issues mark them for abuse from guards and prison medical staff.

That he has undertaken this work at often considerable risk to himself has earned him an international reputation as an observer and critic of the U.S. prison system, by far the world’s largest. It is his work exposing abuse that has prompted his repeated transfers from one state to another.

And now he is back in Virginia, at Red Onion, the prison where he faced serious abuse in the past. Indeed, he has communicated to his lawyer that the same people are still working there today.

For this reason, we need to start making calls to Red Onion to demand that he be given his property, that he be removed from solitary, and that he not be abused.

Please make calls as soon as you can!

Please also write to Rashid, to let him know that he is in your thoughts – and also to make it clear to the prisoncrats that he has support: