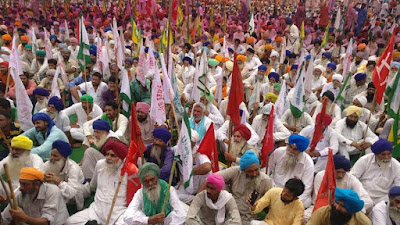 SALUTE THE UNFLINCHING RESILIENCE OF THE PEASANTRY OF PUNJAB AGAINST THE TYRANNY UNLEASHED BY THE RULING GOVT.

SUCH ORGANIZED RESISTANCE IS AN INSPIRATION TO THE PEASANTRY AND DEMOCRATIC SECTIONS ALL OVER THE COUNTRY TO COMBAT THE MENACE OF IMPERIALISM AND GLOBALIZATION WHICH BLESSES FEUDAL LANDLORDISM.

CONDEMN THE APATHY AND NEGLECT OF STATE GOVT. ON PEASANTRY BY NOT PROVIDING ANY SHELTER OR PROVISIONS AGAINST THE MENACE OF FLOODS AND RAIN. AND DIVERTING THE TRUE DEMAND SALUTE THE TENACITY OF THE PEASANTS ASSEMBLING IN PATIALA DISPLAYING THE COURAGE OF AN ARMY BATALLION.

The peasantry of Punjab has displayed the resilience and tenacity of a an army batallion defying an  enemy against all odds with the adminstration not initiating a single step to safeguard the protesters from hazard of flooding and rain.Activists of 7 peasant organizations made the venue look like a turbulent ocean.

Mehmadpur (Patiala), Sept 22
Jaswinder Kaur (52), whose husband, Jasveer Singh, committed suicide earlier this year, was among the thousands of protesters who gathered today in the grain market at Mehmadpur village — 5 km from Patiala — to highlight the farmers’ plight.

“I lost my husband and there are many who have lost their brothers, fathers, sons and others due to the losses and mounting debt. We want justice,” she said, joined by elderly women who were busy peeling potatoes in the community kitchen set up for the protesting farmers.

The farmers vowed to take their agitation to New Delhi and sought the support of their brethren in other states to make farm suicides a national issue.

Addressing the farmers, union leaders said the state government had failed to fulfil the poll promise of waiving their entire loans. “Debt of all farmers should be waived. Families of those who committed suicide should be paid Rs 10 lakh each at the earliest, along with a government job. Farmers should get long-term loans at the minimum rate of interest,” said BKU Ekta (Dakaunda) president Buta Singh Burjgill.

The farmer unions also flagged the National Green Tribunal (NGT) guidelines asking state governments to penalise farmers who burn paddy stubble. “If the state government gives us Rs 200 per quintal as compensation over and above the paddy MSP, we will ensure that no farmer burns stubble. As for now, challaning or registering a case against the defaulting farmers will serve no purpose,” said BKU leader Avtar Singh.

BKU (Ugrahan) president Joginder Singh Ugrahan said: “The government must talk to us and offer a concrete plan for total loan waiver. If our demands are not met, we will make this a pan-India agitation.”

Fatehgarh Sahib: A farmer of Jhambala village in Amloh block of this district, Bhagwan Singh (49),  committed suicide on Friday. The police said Bhagwan Singh owned eight acres of farm land. His family members told the police that he had taken a loan of Rs 15 lakh. Bhagwan Singh had left the house “to look after the paddy”. When he did not return, they searched for him and found his body in the fields. The police registered a case and handed over the body to the family members after getting autopsy conducted. TNS

Chandigarh: Chief Minister Captain Amarinder Singh reviewed the paddy procurement arrangements in Hoshiarpur district on Friday. The CM was en route to Gurdaspur when he halted at Hoshairpur. He asked the Deputy Commissioner to ensure proper implementation of the pro-poor initiatives by the government, including the Atta Dal Scheme and MNREGA, besides timely payment of the social security pensions to the beneficiaries in the district. He reiterated that the exercise was to ensure an inclusive development. Tanda MLA Sangat Singh Gilzian and Mukerian MLA Rajnish Kumar Babbi were present. TNS Tribune News Service

Patiala, September 23
Hundreds of farmers and their families today continued their protest against the state government despite the rain that lashed the region throughout the day.

Besides other demands, including complete loan waiver, the farmers are up in arms against the government’s reported proposal to meter the power supplied to the farm sector.

“The Congress government wants to install meters on our premises so that the supply can be metered. Instead of waiver, it wants to charge us for power,” claimed Sukhdev Singh Kaukri, general secretary, BKU (Ugrahan). “The government should rather focus on fulfilling its poll promise,” he said.

The union members, who are on a protest till September 27, today demanded that they be allowed to take out a march in the city. They also alleged harassment of farmers at police nakas.

Meanwhile, a protesting farmer collapsed at the dharna site and later died at hospital, while another was hospitalised. The deceased was identified as 55-year-old Mukhtiyar Singh of Akai village in Mansa. The union activists alleged that he died due to delayed medical aid. Another farmer Charna Singh was admitted to Government Rajindra Hospital after he suffered an epileptic attack.

The union alleged that despite taking permission from the district administration to hold a six-day dharna, the government failed to provide any facility, including an ambulance, to the farmers. They were not even allowed to use the shed in the grain market to take shelter from sun and rain, the farmers alleged.

The number of farmers and their kin at the protest site (Mehmadpur grain market)had crossed 8,000by late Friday evening
Farmers broughtfirewood and large utensils in tractor trailers for the community kitchen
Elderly women helped them in choppingvegetables, cooking andcleaning utensils
Farmers and policemen were seen having lunchtogether, with the former even serving the men in khaki deployed at the protest site
A heavy police force was deployed in and around the venue, with nakas dotting the roads leading to the grain market

National Green Tribunal has directed Punjab to provide incentive to farmers for not burning straw. In case they persist, environment cess to be imposed on them: Rs 2,500 for less than two acres; Rs 5,000 for two-five acres; andRs 15,000 for more than five acres
There is a deadline for the owners ofself-propelled combine harvesters toget the SMS fitted: September 30
The total cst of installing SMS is Rs 1.2 lakh; subsidy available is Rs 50,000

High cost of additional tools and blades
While profit in harvesting is Rs 100 per acre, the amount to be recoveredafter subsidy is Rs 70,000
SMS wastes four quintal of grain, as against just 5-7 kg wastage with a traditional combine. Average per-acre yield is 30-35 quintal
Cost of Happy Seeder and other implements needed after harvest with SMS too high for mar
Posted by nickglais on 9/24/2017 04:43:00 AM