INDIA - CONDEMN THE ONSLAUGHT AND WITCH HUNT OF THE STATE ON THE LEADERS OF PEASANT ORGANIZATIONS TO SABOTAGE THE PROTEST IN PATIALA ON SEPTEMBER 22ND. SAYS HARSH THAKOR 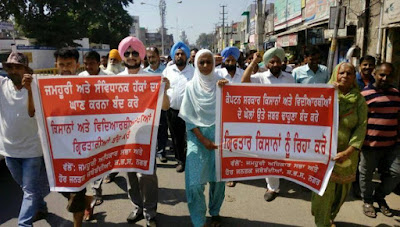 CONDEMN THE ONSLAUGHT AND WITCH HUNT OF THE STATE ON THE LEADERS OF PEASANT ORGANIZATIONS TO SABOTAGE THE PROTEST IN PATIALA ON SEPTEMBER 22ND. SAYS HARSH THAKOR

LONG LIVE THE GREAT RESILIENCE OF THE ACTIVISTS OF THE PEASANT ORGANIZATIONS TO PURSUE THE STRUGGLE RESISTING ALL THE BARRICADES OF THE ADMINISTRATION.PROVES HOW THE STATE TRAMPLES ON ANY GENUINE PEOPLES RESISTANCE AND THAT ITS CLAIMS OF BEING A TRUE DEMOCRACY ARE SIMPLY PRETENTIOUS. MAY THE COUNTER [PROTEST OF THE PEASANTRY CREATE THE IMPACT OF THUNDER IN COMBATING THE WRATH OF THE RULING GOVT. MAY THEY DEFY THE POLICE POSS AND SUCCESSFULLY MARCH TO PATIALA.

A Wave of fascist assault has been unleashed by the Punjab police on the leaders of the farmers union s of the landed peasntry mainly comprising the BKU  Ugrahan leaders.7 peasant organizations had planned to stage a protest on September 22nd in Patiala outside the residence of chief minister Captain Amrinder Singh demanding loan waivers and compensation for suicide victims.

The adminstration has banged every tooth and nail into the coffin to foil the agitation by arresting leaders overnight.

Neverthless the punjab peasntry has not taken it meekly or submissively but created the impact of a tornado with a spate of protests in many parts of the state .

The anger of the peasantry against the wrath of the state is very significant in their preparation to thwart the police vigil and baricades from preventing them into Patiala tomorrow..Some significant solidarity action has ben done by Nuajwan Bharat Sabha,Punjab Students Union and Kirti Kisan Union in Nawan shahar region while in the Malwa region significant matches have been held.Earlier the 7 organization shad staged a conference mobilising 50000 people in Barnala on August 22nd.

This assault proves  that the govt morally tramples down al democratic struggles of the people and wears the tag of a democracy as a garb.The intensification of contradiction with the forces of imperialism and globalization  is sharpening as never before as depicted here and the state is absolutely subservient to it. 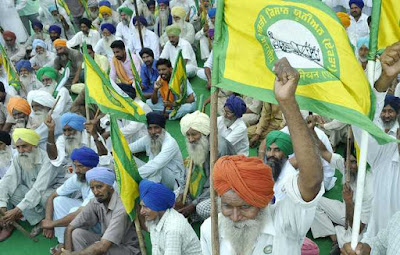 Let us hope the Punjab peaasntry can turn a spark into a priarie fire by shimmering the sacred torch of resistance just a few days before the birthday of Shaheed Bhagat Singh.

Patiala, September 18
The district police, following intelligence inputs, swooped down on the houses of farmer leaders in the early hours today and took them into preventive custody. The development is aimed at thwarting the farmers’ five-day protest in the city beginning September 22.

“We have detained about 230 leaders, while around 170 have fled their houses fearing action. Besides Patiala, farmers have been arrested from Bathinda, Mansa, Sangrur and Barnala,” said an officer. “Initially, we were told to allow the protest, but now the top brass wants that no protest be allowed and farmer leaders be kept in preventive custody,” he said.

Meanwhile, farmer leaders said despite the crackdown, the dharna would be held as farmers were fed up with the government’s false promises. “The police are taking instructions from the government. We want that our demands, mainly a complete debt waiver, be met so that no more farmer loses his life,” said a BKU (Ekta) member.

Earlier today, DGP Suresh Arora held a meeting with senior police officers in the city. He reportedly told them to ensure that no farmer leader reached the city.

Bathinda: The leave of policemen has been cancelled in view of farmers' protest in Patiala. Even the Punjab Armed Police and Indian Reserve Battalion have cancelled the leave of their personnel till further orders. Mukhwinder Singh Chhina, Inspector General of Police, Bathinda zone, said 81 farmers had been arrested from seven districts of Malwa. The arrested included Harpal Singh, brother of farmer leader Darshan Singh Myserkhana. He was later released after people gathered outside Maur police station. TNS Parvesh Sharma

Sangrur, September 21
The Sangrur police have set up special nakas on all roads leading to Patiala to prevent farmers from reaching Patiala to start their proposed five-day agitation in front of the CM’s house from Friday.

During a visit to Sunam and Sular Gharat areas, it came to light that the Sangrur police had formed special teams and laid special nakas on various roads. Police teams are checking all vehicles and even questioning commuters.

“We are checking all vehicles to prevent farmers from reaching Patiala,” said ASI Karmjit Singh while checking vehicles near Mehla Chowk.

Suraj Bhan, a Patran resident going to Ludhiana, alleged that cops were harassing the common man by stopping majority of vehicles.
Posted by nickglais on 9/23/2017 01:51:00 PM