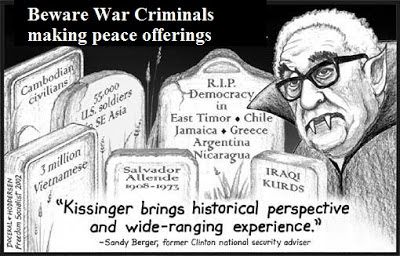 Democracy and Class Struggle has been pointing out for some time the role of Kissinger in determining Trump Foreign Policy Strategy and Eli Lake confirm's that Kissinger's paws are all over Trump foreign policy.

We see Iran and China being targets of Kissinger/Trump Foreign Policy - we have addressed the US strategy against Iran with Israel to destroy the Iran Nuclear Deal.

China will be the target of a new trade agreement offensive combined with political disruption of Hong Kong and Taiwan.

The only voice we have heard in Russia that understands what Kissinger/Trump is up to is Anatoly Salutsky read his views here :

North Korea will emerge more important in 2017 as result of US offensive against China.

"Officials with Donald Trump’s transition team tell me Kissinger has spent several hours since the election advising incoming national security adviser Michael Flynn and his team. He’s also putting his network in place. He recommended his former assistant, K.T. McFarland, to be Flynn’s deputy, and urged Trump to nominate Rex Tillerson, the chief executive officer of Exxon Mobil, as his secretary of state. Kissinger is one of the few people in Trump’s orbit who can get him on the phone whenever he wants, according to one transition adviser.

That’s just behind the scenes. Consider that Kissinger is also an important validator for Trump in the press. When some Republicans questioned Tillerson’s closeness to Russian President Vladimir Putin, Kissinger defended the pick on “Face the Nation.” Kissinger helped soften the blow of Trump’s phone call with Taiwan’s president in December before the Committee of 100, which advocates for the U.S.-China relationship. Before that, Kissinger winged his way to Oslo to urge his fellow Nobel laureates to give the next president’s foreign policy a chance. It feels like 1975 all over again. I’m half-expecting to read something in the tabloids about a Kissinger affair with a Hollywood starlet" 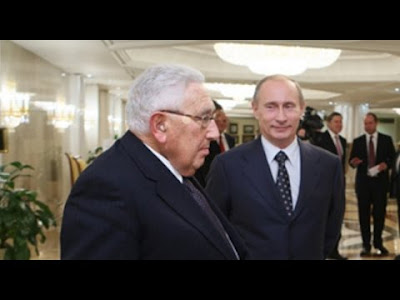