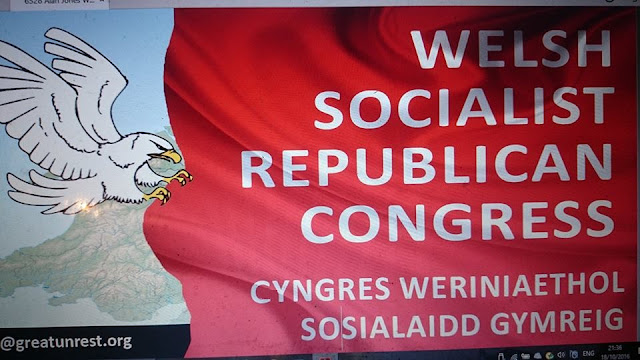 The Welsh Socialist Republican Congress stands for Welsh Independence, we do not agree that Wales is a mere principality of England but a sovereign Nation.

We stand for Welsh Independence as it is the only way to restructure the relationship between two unequal nations the Welsh and English Nations from one of domination by England to one of equality and mutual respect.

The road of the Home Rulers of Constitutional changes and a Welsh Assembly is nothing more than a new management arrangement for the continued domination of Wales by the British State.

We look to the separation of Norway from Sweden as a model of how new relationship between a once dominant nation and subordinate nation was turned into one of mutual equality and respect following Norwegian Independence.

Independence is a prerequisite of a new long term amicable relationship as the Norwegian case has proved.

Continued domination of Wales by the British State no only damages Wales but ultimately the harmony between English and Welsh working people.

Socialism is an idea that was born in Wales and Ireland at the beginning of the 19th Century.

The first socialist was an Irishman called William Thompson from County Cork - he was also called a communionist in the vernacular of the time because he did not believe in a competitive market road to socialism.

Robert Owen also called a socialist took the view that the stock market would aid the road to socialism and ultimately his views came to dominate the Labour Party and are associated with Labour Party reformist politics.

While Owenism led to the Labour Party the ideas of William Thompson  influenced Marxism and the Irish Socialist Republican Party of James Connolly.

The Welsh Socialist Republican Congress is very much in the revolutionary tradition of William Thompson and James Connolly and John Maclean who see independence and socialism as part of the same process of social liberation.

Today 700,000 people in Wales out of a population of three million live in or below poverty line , this is after a 100 years of the Owenite Reformist Labour Party.

In 21st century Wales we need a new revolutionary political strategy and direction based on the ideas of William Thompson, James Connolly and John Maclean - that is revolutionary socialism combined with national liberation from the British State.

The Welsh Socialist Republican Congress in the business of ideas, not events or personalities because it is ideas that will shape the future of Wales and bring about about an economic and cultural renaissance.

Join the new revolutionary stream in Welsh Politics that will turn into a mighty river of National and Social Liberation  into the Welsh Socialist Republic in the 21st Century.

The Policies of the Welsh Socialist Republican Congress

We consider any talk of Welsh Independence that does not address the question of a community public banking system for Wales as irresponsible - a Welsh Public Banking system is at the core of our demands to build an Independent Socialist Wales.

Every 24 hours money from Wales flows into the big Five British Banks to be be on deposit in City of London overnight - we want that money to stay in Welsh Banking System to aid Welsh national local and community development.

We will support legal changes to  create  a National Community Bank of Wales through a Welsh Banking Act.

We want all Royal Lands owned in Wales by British Monarchy to be returned to the Welsh People - this demand is not limited just to the Crown Estates but to all the Royal family ownership vehicles that operate in Wales.

We call for a Welsh Land Commission to establish the detailed  ownership of Welsh Land and to return absentee or unused Land to local community land trusts for communities to develop.

We call for halt to the sale of Welsh Land by local governments in Wales who are forced to sell public land because of British Government austerity policies.

Welsh Water to be owned by the people.

We call for the end of 999 year agreements to supply water to England for token sums  signed by Welsh Water with English Utility companies - we want Welsh Water brought back into public ownership.

Water is a precious natural resource and one that should be regulated and controlled to benefit the Welsh Economy and not abused by the British Economy as at present.

We demand a Welsh Water Act that puts ownership of Welsh Water into the hands of the people of Wales.

Our Demands are as simple as they are basic