Steve Bannon : A Fascist in the White House by Tom Carter 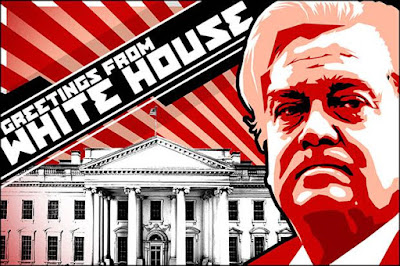 On Sunday, Trump announced the appointment of Steve Bannon to the position of “chief strategist and senior counselor to the president.” This corresponds to the position previously held by John Podesta in the Obama administration.

The appointment of a fascist scandalmonger to serve as the president’s chief strategist epitomizes the “gutter to West Wing pipeline” that is funneling racist, far-right, and religious fundamentalist figures into senior positions in the Trump administration.

Bannon is a fascist, and fully warrants the label. As a political operative, Bannon is a specialist in scandal mongering, provocation and innuendo.

His online rag Breitbart News serves as a platform for white nationalists, anti-Semites, and the so-called “alt-right.”

He is a person who manages, with his own biography, to combine nearly all the reactionary trends in American political, economic and social life.

Bannon began his career as a Surface Warfare Officer in the US Navy’s Pacific Fleet, and went on to serve as a special assistant to the Chief of Naval Operations at the Pentagon.

After leaving the military, Bannon took a position at the investment bank Goldman Sachs, where he worked in the “Mergers and Acquisitions” department. At the height of the “hostile takeover” phenomenon, this department specialized in the wholesale looting and plunder of corporations for short-term gain, employing various legal fictions and transactional frameworks.

After becoming immensely rich, Bannon founded his own investment bank in 1990, “Bannon & Co.,” through which he acquired in one deal a stake in five TV shows, including Seinfeld.

From there Bannon made his way to Hollywood, where he became a minor player. In 2004, Bannon produced an anticommunist documentary about Ronald Reagan: In the Face of Evil. The film purports to explain Reagan’s entire life as a personal struggle against the “evils” of communism, beginning with Hollywood unions and continuing through his years at the White House.

Another, Occupy Unmasked, is a rabid and bizarre fantasy according to which the encampments of the Occupy Wall Street movement are envisioned as sinister dens of rape, drug use, and conspiracy.

The man behind the propaganda is deeply cynical. “To me, Washington, D.C., is a little bit like professional wrestling,” Bannon told Green in an interview. “When I was growing up in Seattle, I’d turn on Channel 13, the public-access station, and watch wrestling.

At first I thought, ‘Man, these guys hate each other because they’re beating the crap out of each other.’ But I eventually realized they’re actually business partners.”

From March 2012 to August 2016, Bannon served as the executive chairman of Breitbart News, which he transformed into a hate rag in open solidarity with the so-called “alt-right.” He left that position to become Chief Executive and “generalissimo” of the Donald Trump presidential campaign.

An article entitled, “An Establishment Conservative’s Guide To The Alt-Right,” published on Bannon’s Breitbart web site, is remarkably candid in its embrace of fascist ideology:

“The origins of the alternative right can be found in thinkers as diverse as Oswald Spengler, H.L. Mencken, Julius Evola,

Sam Francis, and the paleoconservative movement that rallied around the presidential campaigns of Pat Buchanan. The French New Right also serve as a source of inspiration for many leaders of the alt-right.”

The references to Spengler and Evola are euphemisms for German and Italian fascism.

Spengler was a major influence on Nazi philosophy, within which his doctrine of Blut und Boden (Blood and Soil) was an integral component. Evola’s 1941 racist diatribe, “Synthesis of the Doctrine of Race,” so impressed Mussolini that he invited Evola to an in-person meeting. Afterwards, Mussolini helped Evola publish a journal, Sangue e Spirito (Blood and Spirit).

Under Bannon’s leadership, Breitbart News functioned as a round-the-clock jet of filth. The articles published by this “news” agency are so flagrantly hateful and bigoted that it is hardly necessary to deconstruct them in order to expose their content.

Headlines scream about “Muslim rape culture” and “mass Muslim immigration.” “By bringing in these migrants, we are creating an American refugee crisis,” one article declares. A “swarm” of American Muslims was alleged to have been celebrating the September 11 attacks.

Bill Kristol is accused of being a “renegade Jew.” Other headlines reference “trannies” and a “trans hate machine.” Another headline reads: “Birth control makes women unattractive and crazy.”

Breitbart also serves as a platform for promulgating various right-wing conspiracy theories. Hillary Clinton is accused of being in league with the Muslim Brotherhood. Clinton’s aide Huma Abedin, presumably because of her appearance, is accused of being a “Saudi spy” with connections to a “global terrorist entity.”

Bannon’s own writings are infused with the reactionary militarist jargon of blood and honor. In May, Bannon penned an inflammatory open letter to Obama praising the nuclear bombing of Hiroshima and Nagasaki.

Purporting to speak for all the American soldiers who would have died in an invasion of Japan, Bannon alleged (falsely) that Obama had “apologized” for the war crimes and declared that Obama has “not a shred of honor.”

Bannon’s personal anti-Semitic prejudices were publicly confirmed by his former second wife Mary Louise Piccard. In January 1996, Bannon was charged with misdemeanor crimes related to the abuse of his spouse: domestic violence, battery and dissuading a witness.

The sex scandal is another of Bannon’s specialties. Bannon lent his full-throated support to the reactionary campaign over the allegedly lenient sentence for Stanford student Brock Turner, who was convicted of sexual assault following a fraternity party earlier this year.

As a scandalmonger and inciter of racial hatred, Bannon recalls no historical figure so much as Nazi propagandist Julius Streicher, a comparison already made by Republican strategist Rick Wilson as well as numerous other reporters and commentators.

In an interview, Wilson described Breitbart News as “acting like Der Stürmer in Germany in the 1930s more than actually a legitimate conservative media outlet.” Wilson described Trump as “the human avatar of the Breitbart comments section: stupid, vulgar, racist, anti-Semitic, vile in almost every aspect.”

Streicher, the publisher of Der Stürmer, was found guilty at the Nuremberg Trials of complicity in war crimes and crimes against humanity for “his 25 years of speaking, writing and preaching hatred of the Jews.” The judgment continued, “In his speeches and articles, week after week, month after month, he infected the German mind with the virus of anti-Semitism, and incited the German people to active persecution.”

The Democratic Party—including figures such as Barack Obama, Hillary Clinton, and Bernie Sanders—is currently devoting all its efforts to discouraging protests, pledging to “work with” Trump and urging the population to “give Trump a chance.”

Millions of people, on the other hand, instinctively sense the immense dangers involved in the prospect of a Trump administration.

The entry of figures like Bannon into the West Wing, without so much as a peep of protest by the outgoing administration, points to the fact that there is a consensus within both the Republican and Democratic Parties for a dramatic shift to the right in American Politics.

For our view on Populism and its relation to US Fascism