Lenin was born 22nd April 1870 - in his memory we remind people of his theoretical contribution analysing Imperialism.


Lenin was born 22nd April 1870 - in his memory we remind people of his theoretical contribution analysing Imperialism.

Democracy and Class Struggle says Parasitic Imperialism is more transparent than ever has a new era of Land grabs shake the globe aided by NGO's.

Imperialism means War as much in 2016 as it did in 1916 when Lenin wrote his analysis of Imperialism the Highest Stage of Capitalism.

Marx’ analysis of the laws of motion of capitalism belongs to the stage of free competitive capitalism where a large number of capitalist producers competed in the market. He analysed to some extent the process of centralisation of capital.

He however did not live long enough to see the start of a new stage in capitalism — the stage of imperialism. This happened at the start of the 20th century and it was left to Lenin to analyse this process.

In 1897-98 Lenin made some initial analysis of the development of the capitalist world market but did not analyse in full the subject of imperialism.

However with the start of the World War I which was a war caused by imperialism it was necessary to do a full analysis of imperialism to understand the economic basis of the war and the political consequences for the proletariat.

This question became all the more urgent in 1915 when the opportunist and revisionist leader of the Second International, Karl Kautsky, wrote a book on imperialism where he argued that the world economic system was moving towards ‘ultra-imperialism’ where there would be stability and no risk of war.

His argument was similar to some people who analyse globalisation today and argue that, because of the growth of multinational groups and corporations and the spread of their capital to all countries, these multinationals will be opposed to war and there is therefore no danger of a world war.

This theory presented during the World War I gave a false picture of imperialism.

In order to do this Lenin, in 1916, did extensive research and produced his famous work, Imperialism, the Highest Stage of Capitalism. Besides this main work he also wrote many other articles linking this basic economic analysis to the tactics of the proletariat.

In the first place, Lenin tried to clear the confusion created by Kautsky and other opportunists as to ‘What is Imperialism?’

(1) Cartels, syndicates and trusts — The concentration of production has reached a degree which gives rise to these monopolistic associations of capitalists who join together to crush other competitors. They fix prices, allot production among themselves and make other arrangements and agreements to prevent others from entering and succeeding in the market. They play a decisive role in economic life.

(2) The monopolistic position of the big banks and the creation of finance capital through the merger of monopoly industrial capital and bank capital – During Lenin’s time this had already reached the level where three, four or five giant banks manipulated the whole economic life in the main industrialised counties.

(3) The export of capital which gains particular importance – this feature that is different from the export of commodities under non-monopoly capitalism is closely linked to the economic and political partition of the world.

(4) The economic partition of the world by the international cartels – At Lenin’s time there were already over one hundred such international cartels, which commanded the entire world market and divided it among themselves in a ‘friendly’ manner. Of course this ‘friendliness’ would only be temporary and would last until war took place for a redivision of markets.

(5) The territorial (political) partition of the world (colonies) among the biggest capitalist powers –This process of colonisation of all the backward countries of the world was basically completed at the time of the dawn of imperialism. Any further colonies could only be got through redivision of the world, through war. 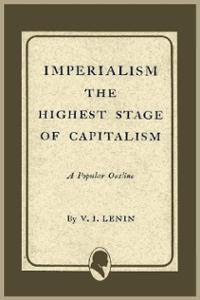 The fact that imperialism is parasitic or decaying capitalism is manifested first of all in the tendency to decay, which is characteristic of every monopoly under the system of private ownership of the means of production.

As compared the rapid expansion under free competition, there is a tendency for production as a whole to decline under monopoly. Technological progress is discouraged and new inventions and patents are deliberately suppressed.

Secondly, the decay of capitalism is manifested in the creation of a huge stratum of rentiers, capitalists who live without working but merely on the basis of the interest or dividend they earn on their investments.

Thirdly, export of capital is parasitism raised to a high pitch as it means the open exploitation of the cheap labour of the backward countries.

Fourthly, finance capital strives for domination, not freedom. Political reaction all along the line is a characteristic feature of imperialism. Corruption, bribery on a huge scale and all kinds of fraud become common.

Fifthly, the exploitation of oppressed nations and especially the exploitation of colonies by a handful of “Great” Powers, increasingly transforms the imperialist world into a parasite on the body of hundreds of millions in the backward nations. It reaches the stage where a privileged upper stratum of the proletariat in the imperialist countries also lives partly at the expense of hundreds of millions in the colonies.

The tremendous socialisation of labour by imperialism produces the same result. The basic contradiction of capitalism between the social character of production and the private character of ownership only gets further intensified under imperialism.

Thus Lenin says, “Imperialism is the eve of the social revolution of the proletariat.”

And Trotsky, Lenin's true successor, was born on 7 November, 1879.
Stalinists like you give Lenin a bad name, Leninism no, Lenin yes!
No wonder you end up supporting Farage just like Galloway.

You have one thing in common with Mr Trotsky YOU LIE

long live Leninism and down with Trotsky.