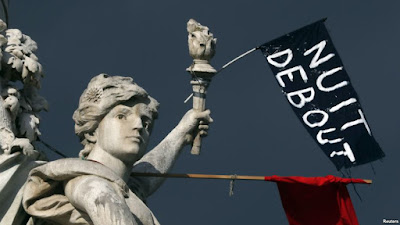 The movement of the squares of occupations,,has expanded in many cities across the country: the movement was initially extended to other cities as Paris and then spread in the suburbs in cities such as Saint-Denis, Saint-Ouen and Aubervilliers.

Taking place in the framework of the mobilization against the Labour Law, the movement Night Stand has several features, some contradictory.

We will try to see the different aspects of the Standing Nights according to where they stand.

First, what type of movement is Night Stand?

The movement initiated by Lordon and François Ruffin under the banner of struggle but convergence and order was within the framework of the fight against the labor law.

But in truth if asked participants, we find they do not have everyone with same vision of the movement.

Basically, we can categorize two major trends, which intersect for some:

a citizen movement, not partisan, non-party and trade unions, a peace movement.

a mass movement, further demonstrations and allowing other forms of mobilization.

In this context, some see it only as a forum to disseminate their ideas. Not giving a clear objective to nights standing, they are for some just a way to express their whims they are more disconnected from reality or overtly conspiratorial.

Others enthusiastically participate in a space where one simply finds to discuss and act with people who think a priori "like us", who see it as a space of hope and freedom.

The first version, citizenist, that's the one we used BFMTV 24H / 24 and all the supposedly apolitical trying to embody everywhere.

This is the version which supports the government and party policies and institutional organizations to support the "Citizen momentum" and get it back, relying on their "useful idiots".

This version of Nights standing there used to isolate the revolutionaries and those who want to push the fight a step up through the nights standing.

It is on this that relies Cambadélis, PS first secretary, when he says that we need "CRS standing who will be there to ensure that violence does not disturb those who want to discuss. "

So in this vision there, Night Stand becomes a giant platform where everyone is free to express whatever he wants, hence the criticism of some that Night Stand like a group therapy.

The purpose of Night Stand would no longer fight but to be "genuine democracy". With this they say that everyone, whatever their political ideas is welcome and should respect freedom of almost total expression.

It is also on this vision where speakers rely on conspiracy blathering their fight against anti-Semite "new world order" or supporters of Etienne Chouard, who are desperate to serve us their soup "new constitution".

Dwell a little on these, because it is with this fringe where we had the most problems.

Many express the claim of a "real democracy". The idea of ​​Chouard or Mélenchon, they say they want to write a new constitution, more just, more democratic.

For them the source of our problems would be the 5th Republic, its constitution and its laws. When we speak of struggle in the assemblies, those here we speak of healing and consolidation, especially around a hypothetical "constitution".

They should include a piece of paper only becomes important when it is embodied in reality.

Bourgeois laws were important only because they are embodied by the cops, courts and judges.

Speaking of "citizens", it clears the main contradiction of capitalist society, that is to say, the class contradiction.

The problem is not that modern democracy is "false" but it is bourgeois, that is to say, it is a tool of the dictatorship of capital.

Faced with this democracy can not oppose papers, new constitutions or ideal society projects as did the utopian socialists in the 18th century.

Faced with bourgeois democracy, they oppose the organization of the proletariat around the working class to fight relentlessly against capitalism.

Based on their negation of the class struggle, we are told that the movement should reach out to the cops and work with them so that everything goes well.

Similarly, after a small media criticism varnish should absolutely renounce any action that we décrédibiliserait to them. And above all we would risk being punished because we do not respect the rules ... Well, not all of the arguments Night Stand but a kneeling life!

These guys even deny police repression (or worse encourage as when 'responsible' Night Stand at Republic have called the cops last Saturday night) and put the blame of the crackdown on the occupants in their mouths ... finally it is rather the rioters, troublemakers, violent elements, in short, the "bad protesters".

This discourse leads to the organizers to more and more cooperation with police forces, recently the police prefecture of Paris made a statement to greet Night collaborative efforts

Occupy, Podemos, Syriza are they models?

Among those who reject that Night Stand is a non-political movement, many would like it to be a tool to bring the left  to a base, outside parties and unions. They are inspired by places of occupation movement that took place in Spain with the indignant for example, they also evoke the Occupy movement in the United States and for some the gathering of the "radical left" in Greece with SYRIZA.

According to them, it would re-appropriations of examples of policy by the base and an alternative to the traditional parties in routs. However if one analyzes what happened in Spain or Greece, it quickly becomes clear that these are not role models.

Thus all the efforts have been devoted to electoral participation by selling the illusion that one could transform capitalism from within.

We did get that in Syriza in Greece who has been unable to resist the demands of the European bourgeoisies.

It comes down to the conclusion that Marx had set in the Civil War in France written in 1871 and coming back on the experience of the Paris Commune:

the proletariat can not simply take over the state machine and turn to his account but must destroy thoroughly the bourgeois state to establish the dictatorship of the proletariat.

If the rejection and disgust with institutionalized political parties is something quite legitimate, it is not the creation of a new electoral eclectic party that is the solution.

The working class and the whole proletariat needs a Party to lead the revolution, this party must represent its interests, he must defend a revolutionary strategy and a clear political line, it must be based on the ideology of the proletariat our time, that is to say, Marxism-Leninism-Maoism.

Night Stand can it be a tool of class struggle against the Labour Act?

If we look at the composition of Night Stand, mainly in Paris, one realizes that it is mainly the middle class as well as students who are mobilized.

The very form of Night Stand does not allow a real mobilization of workers.

After a long day of work, there is no time to spend the night standing, there is no energy to listen to speeches of all sorts for hours to finally talk about three minutes.

This applies mainly for Night Stand in the place of the Republic and is felt less in the suburbs.

If we look at the movement Night Stand in the suburbs we see that primarily mobilized the community movement and part of the labor movement but barely expanding, so we often fall back into a known militant circle and used to speak.

Thus through this fast table, we already see the limits of motion Night Stand Night Stand still, this is not it and the positive aspects need to be highlighted and supported.

Outside a fringe that seems not to live in the same world as us, surely because they and they have never set foot on a building site in a factory, never lived in popular neighborhood ', have never accumulated precarious jobs, have never suffered police repression, have not seen their friends without risking deportation papers, never saw evictions ... (is that possible?), in short, that seem to look at the world around them through rainbow sky glasses, there are also those who try to animate the nights standing a fighting spirit.

It is this fringe there who also think that the demos will never allow us alone to win any battle whatsoever. It is here that emerged the most interesting actions of Night Stand, including police stations besieged by hundreds of people to release the arrested comrades; solidarity with migrants; solidarity with the railway through the occupation of stations; etc.

But we must see that strategically, the standing Nights are like the demonstrations, they are useless if they do not allow the fight to pass a course.

What is decisive is how the working class is mobilized in this fight, to what degree of confrontation it is ready to go.

In other words, how to advance the movement towards a general strike and blockade and occupation of production facilities, distribution and communication, daring frontally oppose the bourgeoisie.

This is what is decisive in the class struggle. Is Nights Standing allow this? It is not impossible but unlikely as it is, this would require a radical transformation of the movement with a clear goal.

It is more realistic to consider this movement as what it is: a movement whose political line is far from clear and whose social base is divided between predominantly middle class and lower part of the proletariat, but who can afford the revolutionary group around them; an extra tool demos but that is not sufficient in itself. This can only be done by leading the fight are laying the line, breaking away from the citizenist line that tries to reconcile the irreconcilable interests.

We need to explain the dynamics of the class struggle, the irreconcilable interests which are the basis of society and the role of the state and the entire superstructure end of capitalism.

We must reject the process that writing a new constitution is more important than developing the struggle.

We must implement concrete actions.

We must give a clear purpose to the movement: the withdrawal of labor law at first.

Not because the Labour Act would be the source of all our problems.

We all know that the latter is only an anti-labor law and anti-people over the government after the ANI, the responsibility pact, the macron law.

The need for a resolute struggle against the labor law is that our class has been shackled with the defeats since the defeat against pension reform:

only a win can we move beyond the defensive to try to win new gains.

It is only like this that we can combine the part of Night Stand that wants to pass the class struggle to a higher level, especially through discussion and action, while having in mind all the limitations of this type movement. 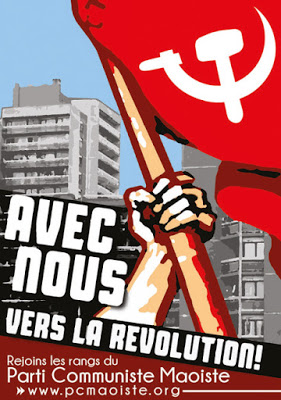