India: Will the Real Nationalists please Stand Up? by Kobad Ghandy 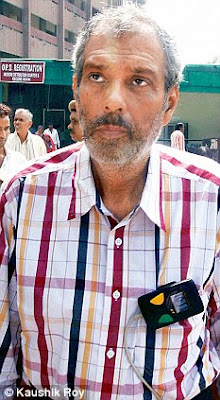 Democracy and Class Struggle see's this article by Comrade Kobad Ghandy has corrective to some of those on the Indian Left who instead of attacking the neo liberal Modi government as anti national internalise BJP propaganda and call themselves "anti national".

The following is the latest article written by Kobad Ghandy, the noted Marxist-Maoist thinker, now lodged in Tihar Jail 3. He first sent it to The Indian Express requesting them for publication at the earliest as it is topical—linked to the JNU issue; however, since he did not hear anything from them, he sent it to us for publication. We are thus carrying it at the earliest possible opportunity for the benefit of our readers.

This I could only appreciate when I was in Britain to study CA (Chartered Accountancy) in the late 1960s. As it was there that I witnessed that we, Indians, were being treated in a racist manner by the Whites, it made me look for its cause. I discovered its roots lay in their colonial mentality. So I began reading about colonialism/imperialism and the history of our freedom struggle.

Dadabhai Naoroji’s great treatise threw much light on how a rich India had been ruined by two centuries of colonial loot. R.P. Dutt’s book, India Today, gave insight into the sacrifices of thousands who fought for our freedom, and the brutality of the British who sought to crush the people’s aspirations, and divide them through a policy of divide and rule.

The roots of the present Hindu-Muslim divide could probably be traced to this colonial policy which helped divert people’s anger away from the British rulers.

Finally, after four years of doing CA with a potentially rich career, I threw up my studies and came back to India to serve the nation. I was faced with a dilemma: either to become rich and powerful, or to serve the nation, particularly its oppressed sections. I chose the latter path, possibly due to a strong nationalist surge within me.

It was a difficult decision, but never regretted. Though it has entailed giving up the luxuries of a CA’s life, it has given an enormous personal satisfaction through serving the helpless. Unfortunately, at the fag end of my life I was arrested for the first time under colonial-type laws and have now spent six-and-a-half years in jail with little sight of release, though I am 68 with numerous health problems.

If I had followed my CA career I would have been living a five-star life, but to feel for the wanton destruction of our land and people, and to act on it, has resulted in this cruel incarceration reminiscent of colonial times.

But it was difficult to stay unmoved by the veritable rape of Mother India taking place on a daily basis. It makes one weep to see the dreams of our freedom fighters being crushed to dust even after nearly seventy years of independence.

A brief picture of the destruction being wrought on our land and people, together with the direction of economic growth, will give an orientation on where our nationalism needs to be focussed. First, let us look at our land, then the state of our people, and finally, the economy.

Witness the extent of destruction. The bulk of our top soil is destroyed due to chemicals resulting in poor water retention which in turn results in floods, droughts and poor seepage, drying up our water acquifiers and making them saline. Additionally, in a mere 15 years, between 1999 and 2013, 15 per cent of our total forest cover has been destroyed, and in the following two years (2013-15) a further destruction of 2500 square kilometres of prime forest land has taken place. This is the main reason for poor and erratic rainfall resulting in successive droughts and unseasonal rainfall, playing havoc with our crops.

Finally, notwithstanding the clamour about Swachh Bharat, India generates 36,875 million litres per day of untreated sewage, turning our pristine river systems and coasts into glorified gutters—killing our fish and resulting in five lakh deaths a year due to water-borne diseases.

Now let us turn to our people. Of the rural populace 45 crore live as agricultural labourers and another 20 crore as marginal farmers (having less than 2.5 acres). The bulk of these cannot even buy sufficient food; and now with prices of basic food items—pulses, onions etc.—sky-rocketing, the little they had is being snatched from their mouths. But this is not all—it is the relatively better farmers who are also in deep crisis with farmers’ suicides peaking this year at over 10,000—that is, 28 every day. Finally, even the urban population, roughly 50 per cent or 15 crore, live in the most unhygenic slums with no livable jobs available.

So we find that even after nearly seventy years of independence, 80 crore of our people (65 per cent) live in sub-human conditions. And as for the 30 crore odd middle classes, they too are being squeezed out due to lack of jobs, inflation and huge expenditure on sicknesses. And in spite of their declining conditions, the latest Economic Survey (February 28, 2016) plans to snatch a gigantic Rs 1 lakh crore from them through reduction on subsidies, while leaving the Rs 5 lakh crore subsidy to big corporates untouched. It is only the top two-to-five per cent who are thriving, but it is they who control the power and media.

Over-and-above all this, we are a sick nation with epidemic levels of illness hitting both the poor and middle classes. According to government reports, 52 per cent of all households face severe malnutrition and, in fact, the protein intake has dropped 10 per cent in the last two decades. Sixteen lakh children (under five years of age) die every year, there are 1000 TB deaths per day and malaria/dengue continues to cause havoc. And to these infectious diseases are now added the new-age diseases like cancer, heart, lung etc.

The Health Ministry states that 6.5 crore people are pushed into poverty every year because of expenses on healthcare. In the year 2011-12 alone, 4.3 crore people faced “catastrophic expenses on health”. Yet, our government’s expenditure on health is one of the lowest in the world—at about one per cent of the GDP (China’s is three per cent). Is not this de facto mass murder—nay genocide—as surely increased government expenditure on healthcare, hygiene and a reduction of pollution would save thousands of lives every year??

This destruction of land and people is linked to the nature of our economy which is in terminal decline yet generates enormous black money. The rural economy is in dire straits, manufacturing is in the doldrums, banks are de facto bankrupt, the rupee is crashing, exports are contracting as never before and sky-rocketing inflation is eating into real wages. Let’s look at the economy first.
Farm growth has now plunged to one per cent. Industrial production has been continually declining and ‘growth’ in November 2015 (at -3.2 per cent) went to a four-year low. Value added in total manufacturing output declined from 25 per cent in the 1990s to 18 per cent now.

Manufacturing contributed to a mere six per cent to total labour productivity growth, compared to 32 per cent in China. Banks are on the brink due to corporate defaults, surviving mainly on account of huge infusion of funds by the government. While the big corporates continue their seven-star lifestyles, they refuse to meet their huge debts with the government bailing them out. Finally, we see that the rupee has crashed to a 28-month low, and that exports in 2015 contracted by a massive 18.5 per cent—the worst since 1952-53.

The economy could not be in a worse mess. Only the black economy flourishes.

According to a report of the National Institute of Public Finance and Policy, submitted to the then Finance Minister in December 2013, black money constitutes 75 per cent of our GDP. In other words, Rs 120 lakh crores of black money is generated every year. Even at 25 per cent taxation the government is losing Rs 30 lakh crores in tax every year. This gigantic sum would be more than sufficient to develop agriculture, to invest in manufacturing, and invest heavily in healthcare and education.

So it is this black economy that is not only retarding the development of our land and people, resulting in lakhs of deaths each year, but also corrupting the morals of an entire nation. No social upliftment can be successful as all get mired in corruption.

Our nationalist fervour, for a start, needs to be directed in this direction—that is, to shame the corrupt officials publicly, punish the big offenders and extract from all of them the vast sums looted. So, for example, instead of targeting Aamir Khan whose films and TV programmes show concern to national problems, one needs to focus on the Vijay Mallya, Lalit Modi-types who are reported to have fleeced our country of thousands of crores.

While Aamir Khan only ‘considered’ leaving India, Vijay Mallya, Lalit Modi etc. are believed to have already fled to the UK, probably wallowing in the vulgar luxury of hawala money.

Meanwhile 80 Marathwada farmers committed suicide in just this one month of February 2016. A lot of these lives could have been saved if just one day’s expenditure of Mallyas/Modis on their five-star yachts could have been diverted where it actually belongs.

Who, then, are the real anti-nationals??