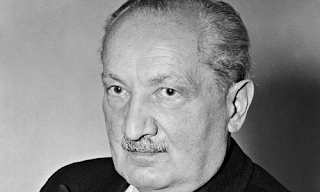 The scandal provoked by the publication of Martin Heidegger's notes and reflections between 1931 and 1941, currently underway in Germany, is truly stupefying. The philosopher's "black notebooks" (schwarze hefte) were so-named after the colour of their covers; and now we find out that they are black above all in their content.

But is this so surprising?

Yes, we do have the confirmation that immediately after Hitler's coming to power Heidegger signed up to the Nazi party, and that he did so nourishing excited hopes. His outlook in the first place concerned Germany: "the German people is now on the brink of rediscovering its own essence and making itself worthy of a great destiny."

After the country's defeat in the first world war, the German people were, he thought, going to experience a triumphal renaissance, saving the world from catastrophe and, above all, from Bolshevism.

For Heidegger, indeed, the promises of regeneration implicit within Nazism went well beyond German borders: it had been called upon to realise his longed-for "destruction of modernity", putting an end to the egalitarian massification which had, of course, seen its most ruinous expression in the October Revolution, but had begun long beforehand with the advent of liberalism and democracy.


And, if Heidegger's hatred for Soviet Russia was boundless, what reigned supreme was his low opinion for the Anglo-Saxon world.
Nazism constituted, or could constitute, a "new beginning" with respect to all this, a new beginning for culture and politics. The black notebooks are a testament to the almost messianic expectations that inspired the philosopher to join Hitler's party.

All this much is true. But it was already known to Heidegger scholars from a section of his 1935 Introduction to Metaphysics and its celebration of the "inner truth and greatness" of nazism.

Modernity is synonymous with subversion, since with its universalist ideologies (liberalism, democracy, communism) it destroys the communitarian and traditional bonds that unite the members of a given people and separates this same people from its territory and history. Inevitably, the critique of modernity ends up also concerning Jews.

The black notebooks confirm this: present in many countries and attached to urban rather than rural life, Jews are the incarnation of "rootlessness", "distance from the soil" and thus subversion. And again, this attitude is far from surprising to the Heidegger scholar: the 2 October 1929 letter in which the philosopher emphasises the need to oppose "growing Judaisation within German spiritual life", reinforcing this by rooting it in authentically German forces, is already well-known.

The black notebooks theorise in explicit fashion the importance of the "racial principle" and, even if in a contorted manner, justify the Third Reich's race laws.

Here, we do find undoubtedly new material (indeed, material of great interest) adding to what we knew already. But one already famous, perhaps infamous letter, should not be forgotten. It was Heidegger's wife who sent it on 29 April 1933, albeit with the agreement of her husband, who was at the time also the rector of the University of Freiburg. The recipient was the wife of Edmund Husserl, Heidegger's teacher.

This letter expressed his consent to the "hard new law, rational from Germans' point of view", which excluded Jews from university teaching, including Gerhart Husserl, son of the illustrious philosopher of the same name, who as a Jew was stripped of his civil law chair at the university, despite being a wounded veteran of the first world war. In this context, we must add also the testimony of Karl Jaspers, according to whom Heidegger drew attention to the "dangerous international association of Jewry" soon after the Nazi conquest of power.
The outcry over the black notebooks is thus unjustified, but it would be all the more unjustified to imagine a mythical, eternally irredeemable Germany, ignoring the historical context in which Heidegger's life and work were situated.

His Judeophobia came at a moment when across the west as a whole, on both sides of the Atlantic, there was a widespread view that the true culprits for the October Revolution were Jews.

Indeed, in 1920 car tycoon Henry Ford wrote that this event had a racial and not political origin, and, though making use of humanitarian and socialist language, it in fact expressed the Jewish race's aspiration for world domination.

It is worth noting that it was Ford's picture that had pride of place in Hitler's study and not Heidegger's: the origins of nazism and the ideological motives inspiring it were not exclusively German.

Secondly, as the black notebooks confirm, although Heidegger was a Nazi to the end this does not mean that nothing can be learned from him. Germany is the country that perhaps more than any other has had to struggle with imperial universalism, often the synonym of universal interventionism: leaving aside the ancient Romans and the expeditions of the Emperor Augustus, we ought to bear in mind that first Napoleon III in 1870-1 and then the entente powers in 1914-18 waged war in the name of the expansion of "civilisation" or "democracy", in each case in the name of "universal" values.

This explains the aggressive, reactionary anti-universalism in Germany that found its first expression in Nietzsche and then, above all, in Heidegger and Schmitt, both of whom supported the Third Reich.

This is a tragedy and an infamy that certainly leaves aggressive, reactionary anti-universalism with much to answer; but it does not in any way absolve western imperial universalism of its own responsibility and crimes.

• This piece was translated by David Broder

War and Revolution - Rethinking the 20th Century by Domenico Losurdo


Critique of Alexandr Dugin a contemporary follower of Heidigger's thought