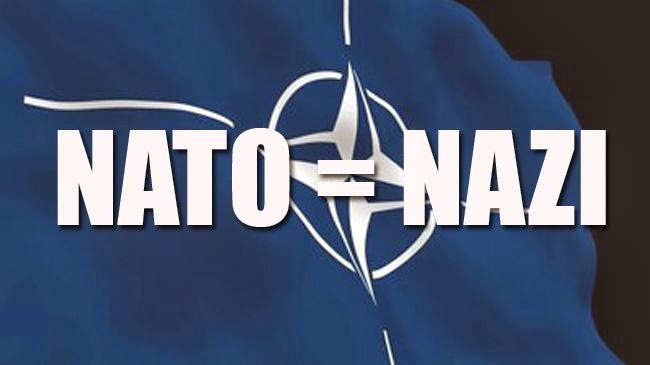 Democracy and Class Struggle says helping Fascists and Neo Nazis to Power in Kiev is nothing new for NATO.

I am old enough to remember the Coup in Greece in April 1967 has I was on the street in Wales has soon has it happened getting people to sign a petition against the Military Junta.

It was on a NATO contingency plan code-named 'Prometheus', that the Military Junta based their putsch .

Many writers have documented how British and American elites bankrolled Hitler’s rise to power and not until he turned his forces westward did they begin to mount defensive actions against the Third Reich. In Britain, elite members of The Right Club, often with government collusion, secretly supported Hitler’s actions against the Jews and against communists and socialists.

The Duke of Wellington was a noted anti-semite and a member of the Right Club. Edward the VIII, known as "the Traitor King" was close friends with Adolf Hitler and was forced to give up his throne, not because of Wallis Simpson, but because it was discovered that he was passing British war operations documents to the Nazis. The aristocracy, after all, have never submitted to sharing the wealth with the lesser classes and Adolf was equally amenable to those ends, the destruction of the untermenschen being foremost in Plan A of his conquest strategy for Europe and Russia.

Until 1977 the BIS headquartered in Basel, Switzerland, hid itself from the world. Bankers told visitors to go to Frey’s Chocolate Shop and enter the unmarked entrance of the former hotel next door.

The Bank for International Settlements was a joint creation in the 1930’s of the western world’s central banks, including the Federal Reserve Bank of New York. Montagu Norman, governor of the Bank of England was a wholehearted supporter of Hitler and, when the Nazis marched into Austria in 1938 most of the country’s gold was packed and loaded into vaults controlled by the Bank for International Settlements - the main central bank for the western world.

One day later the Nazis marched into Prague, took the directors of the Czech National Bank as hostages and demanded they cede control of the country’s gold reserves representing some $48 million. Informed that the gold had already been transferred to London’s vaults, efforts were made to contact Montagu Norman - who immediately transferred the money to the Germans to outfit their war machine. Friends indeed.

The United States of America had not yet arrived at the position of world’s leading imperialist power, but many of its elites were aligned with British elite sentiments.

One of the leading lights in furthering the rise of Adolf Hitler and the Nazi party was none other than Prescott Bush, father to George Herbert Walker Bush and grandfather to G.W. Bush, both future presidents and G.W. H. Bush as head of the CIA. These war criminals have maintained their popularity among right-wing Americans mostly due to a compliant media that has obscured their Nazi-loving history from the populace at large.

On Oct. 20, 1942, the U.S. government ordered the seizure of Nazi German banking operations in New York City which were being conducted by Prescott Bush. Under the Trading with the Enemy Act, the government took over the Union Banking Corporation, in which Bush was a director.

Tarpley and Chaitkin add the following

:
President Bush’s family had already played a central role in financing and arming Adolf Hitler for his takeover of Germany...By deciding that Prescott Bush and the other directors of the Union Banking Corp. were legally front men for the Nazis, the government avoided the more important historical issue: In what way were Hitler’s Nazis themselves hired, armed and instructed by the New York and London clique of which Prescott Bush was an executive manager? [2]

Among those supporting the rise to power of Adolf Hitler was industrialist Henry Ford, a noted Jew hater. Among his other crimes, Ford..."refused to build aircraft engines for England and instead built supplies of the 5-ton military trucks that were the backbone of German army transportation."

[3] The list of US industrialists linked to the Nazis is too long to recount here but can be accessed in Charles Higham’s excellent book, Trading With The Enemy: the Nazi-american plot 1933 - 1949. [4]

Clearly the west’s leading financiers were in Hitler’s camp, busy supplying funds for his military buildup and not till he betrayed them by attacking England did the Allies unite to defeat the Nazi forces. In this effort an unholy alliance was formed; that of the western powers and of the Soviet Union, the major force in defeating Hitler’s legions.

Yet long before the war ended the Brits and Americans were plotting to redirect their energy against the Soviets, a déjà vu of the 1918 invasion that the west mounted against the Bolsheviks and certainly the most unknown major event of modern history.

To this end the British and US rescued the most murderous Nazi war criminals being sought by investigators of the same governments and mingled them into British and US apparatus of terror.

It was immediately after the creation of the United Nations that American leaders found it necessary—as a matter of interest—to break the new rules they publicly lauded. In doing so, they developed new systems by which to evade accountability for law breaking–including an enormous apparatus for covert intervention–and, by means of extraordinary effort, to present the United States’ actions, whatever their nature, as in accord with international law. [5] At the same time as the west was planning its covert actions against its WWII ally, it also created the formation of the terror club known as NATO, the North Atlantic Treaty Organization.

Almost in its entirety it was a Nazi enterprise. Nazi General Reinhard Gehlen, for example, who had headed the Russia Desk in the Oberkommando der Wermacht (OKW - Hitler’s Supreme Headquarters) and a consultant on the Final Solution, was secretly brought to the United States where he would deliver his vast storehouse of previously hidden files on the Soviet Union and then set up the Russia Desk for the soon-to-be-formed CIA. [6]

Gehlen would then be returned to postwar Germany where he was put in position as head of Germany’s new Bundesnachrichtendienst (BND), the German Secret Intelligence Service. In essence, two Russia desks (at least) now functioned instead of just one; both with the same ultimate aim: destroy the Soviet Union and communism.

Hundreds if not thousands of old Nazis found new life working for the US, Britain, and Canada as the Cold War was cranked up and now the mass murderers were brought into policy making for the same Lords of the Manor who had supported Hitler to begin with. And, with the same old Nazis back in charge, every foul means was employed against the Soviets to prevent any challenge of global capital’s right to dictate the terms of enslavement.

West Germany, now being run by ex-Nazis under Chancellor Konrad Adenauer, joined NATO in 1954 and Gehlen liaised with his pro-Nazi mentor Allen Dulles who would become head of the CIA, with brother John Foster as Secretary of State.

Soon NATO began appointing the old tried and true Nazis into high positions within the organization.

Col. Heinz Koller-Kraus was made head of logistics at Speidel’s AFCENT. Many other Gehlen men would soon join NATO to define its policies. [8]

With the same Nazis well integrated into NATO and the CIA becoming an extension of Gehlen’s old Nazi intelligence agency, the Nieue World Ordnung was essentially relocated from the Reichstag in Berlin and dropped into the Pentagon and CIA Langley, Virginia.

Added to the anti-Soviet battle plans, US elites recognized the value of Goebbel’s Ministry of Truth and turned the lessons learned into the world’s most sophisticated propaganda network ever created.

The corporate funded elites that run the UK and Canada were quick to adopt the same essential elements.

Two of those components of the propaganda wars for the US/UK/Nazi Nieue World Ordnung was the creation of Radio Free Europe and Radio Liberty - both staffed with Gehlen’s old Nazis and funded by the CIA. [9]

These Nazi mass murderers set up an Hungarian Desk, provided arms and assistance to underground pro-Nazi elements in Hungary and together with the CIA, instigated the Hungarian uprising - which the Soviets brutally put down [10].

The prime use of this episode however, had little to do with the dead and dying, rather it was the propaganda value which portrayed an "Evil Empire" that had to be destroyed. [11]

Dr. Eberhardt Taubert joined the Nazi party in 1931 and was soon promoted to the rank of Sturmführer, following Goebbels to the Ministry of Propaganda.

After the war Taubert slid down to South Africa where he found comfort among the neo-Nazis in power in Johannesburg busy designing the apartheid system.

In 1950 he returned to Germany and joined his old Nazi pal Reinhard Gehlen, becoming a member of the BND.

In his new BND/CIA post, Taubert became chairman of the CIA-backed "National Association for Peace and Freedom" becoming also an adviser to German Minister of Defense, ex-Nazi Franz Josef Strauss and was then assigned by Strauss to NATO as adviser to the "Psychological Warfare Department". Goebbel’s Ministry of Truth being recirculated to feed the Christian fundamentalists some newly constructed, yet old and familiar Tales from the Dark, only having different packaging. [12]


NATO has also been closely linked to a series of terrorist bombings in Italy in the 1980s in order to create a "Strategy of Tension" designed to allow the fascist right wing into power and thereby bring "stability" to the country. This program made use of numerous far right terrorists like Stefano Delle Chiaie of Ordine Nuovo and other demented souls who planted bombs in public places that killed hundreds, aided in implementation by Gehlen’s NATO/Nazi terrorists. Though well covered in Europe, thanks to media complicity, the story barely made a blip here.

In essence these and their followers are the people that run NATO, presently killing its way around the world thanks to the likes of Barack Obama, Steve Harper, and the rest of the West’s puppet satraps; while posing as defenders of humanity. It’s all too much to embrace without losing one’s dinner over and over again.

HOW NATO MORPHED GLADIO INTO GLADIO B