India: Supreme Court has never given Mr. Modi a clean chit on the issue of 2002 pogrom 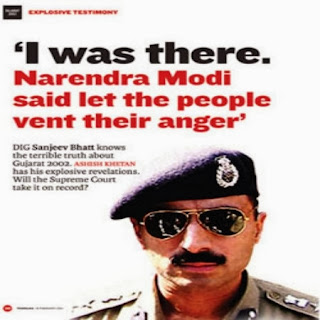 In an interview to the foreign news agency Reuters that was published on July 12 2013,Narendra Modi, Gujarat Chief minister has made a desperate attempt to create an impression that Supreme Court has given him a clean chit through the SIT which was appointed by it  to investigate the criminal complaint of Zakia Jafri and Citizens for Justice & Peace (CJP) on 27.4.2009.

A section of the media, without verifying the facts has allowed this impression to gain credibility. The facts in relation toSupreme Court and SIT are as follows:

The SIT was appointed by the Supreme Court on 26.3.2008 on a petition by Teesta Setalvad, D.N.Pathak, Cedric Prakash and Others, first to look into the nine cases recommended by the National Human Rights Commission (NHRC) to be investigated by the CBI. The same SIT was a year later also asked to look into the criminal complaint against Narendra Modi and 61 others filed first before the Gujarat Police on 8.6.2006.

The SIT submitted its report on the Zakia Jafri and CJP Complaint to the Supreme Court on 12.5.2010 itself recommending that Further Investigation was required.

In the interim, the SC had also to drop two officers from the SIT, Shivandand Jha (because he was an accused in the Zakia Jafri complaint) and Geeta Johri who had been found, in the Sohrabuddin case to have serious strictures passed against her by the Supreme Court itself. (April 6 2010)

The following features of the SIT report need special mention:

(a)    It found the speeches of N Modi objectionable and that Modi had a communal mindset, travelling 300 kilometres to Godhra but not visiting any relief camps that housed the internally displaced Muslims, victims of reprisal killings
post Godhra until 6.3.2002.

(b) It found it questionable that bodies of the unfortunate Godhra victims were handed over to a non-government person, Jiadeep Patel of theVishwa Hindu Parishad

(VHP) who is currently facing trial in the Naroda Gaam massacre case;

(c) It found that Saneev Bhatt an officer of the State Intelligence, Gujarat had opined that  he attended the controversial meeting at the chief minister’s
residence indicating that illegal and objectionable instructions were given.

(d) It accepted that Police Officers like RB Sreekumar, Rahul Sharma,Himanshu Bhatt and Samiullah Ansari who had performed their tasks legally had been penalised and persecuted by the Modi regime and those who had buckled under the illegal and unconstitutional instructions had been favoured consistently;

The SC was not satisfied with this conclusion and direcetd that the Amicus Curaie Mr. Raju Ramachandran, who had already been appointed to assist the Supreme Court in this critical case, visit Gujarat, independently assess the evidence garnered and meet with witnesses directly, bypassing SIT.

The Supreme Court gave the SIT an opportunity to further investigate in light of the Amicus Curaie’s contrary findings and thereafter file a Final Report before a Magistrate on 12.9.2011. In the same order the SC gave the petitioners the inalienable right to file a Protest petition and access all documents related to the SIT

After its further investigation the SIT, ignoring the contents of the Amicus Curaie report, filed a final closure report on 8.2.2012 without issuing any notice to the complainant Zakia Jafri and CJP as is required under Section 173(2)(ii) of the CRPC. Worse, it fought a hard as nails battle to deny access to any of the documents related to the investigation to the petitioners.

It took a whole year, from 8.2.2012 to 7.2.2013 for the complainant to access all the documents related to the Investigation including the SIT Reports filed before the Supreme Court. The complainant Zakia Jafri assisted by the CJP filed the Protest Petition on 15.4.2013.

The petitioners Mrs. Zakia Jaffri and CJP are now arguing in support of the Protest Petition being allowed, showing through an arduous and rigorous process, how the SIT ignored its own evidence. Arguments that began on June 25 are still going on.

It is clear from the above that the SC has never given Mr. Modi a clean chit on the issue of 2002 pogrom. These facts could have been earlier verified by Reuters as well as the collusive media. We hope that the media will present the facts truthfully in relation to the ‘so-called’ clear chit to Mr. Modi