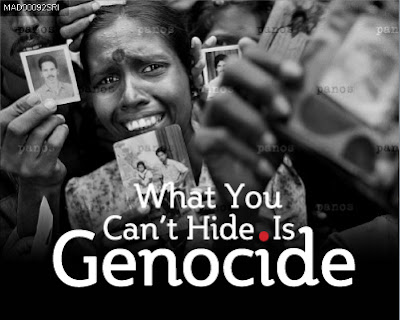 Democracy and Class Struggle was about to publish this article by Frances Harrison on Sri Lanka when we received this report from a Tamil Comrade on current situation in the country:

In Sri Lankan 109 young girls were forcefully recruited by Sri Lankan military.
Imperialist countries and Indian government helped the Rajapaksha regime to carry out the genocide. UN and some western funded NGOs are claiming the death toll is about 50 thousand within the last 3 days of the final war. However according the independent sources, the actual number may be up to 100 thousand. In order to silence the angry Tamils around the world, UN, European Union and US repeatedly asserted for the past four years that they would punish Rajapaksha government for War Crime. Once the government of Sri Lanka let the multinational to exploit the country, these imperial power and its components are discussing the so called development in Sri Lanka.
In the north of Sri Lanka where Tamils live predominantly, which is under the administration of Sri Lankan military and its paramilitary forces, young Tamil girls have been forced to marry members of the Sri Lankan army. The military introduces drugs among the School children. Prostitution is promoted as a tool for earning money by the military in the north and east.
In this context the Sri Lankan military recruited Tamil young girls.
Clearly the injustice continues to this day in Sri Lanka has does the silence about it. Silence is complicity, in not only hiding this appalling genocide but complicity in future genocides to come because nobdy had the courage to expose this one before the world.


It’s been called Ban Ki-moon’s Rwanda moment: a little-reported war three years ago on a tiny Indian Ocean island where tens of thousands of civilians were slaughtered, waiting for the United Nations to come and rescue them.

What happened in Sri Lanka in 2009 has come back to haunt the UN with the leak of an internal inquiry commissioned by the Secretary-General. The independent report concluded that the UN’s own conduct during the final months of Sri Lanka’s civil war marked a “grave failure.” There was damning criticism of senior staff, who “simply did not perceive the prevention of killing of civilians as their responsibility.”

Would the entire report have seen the light of day if a draft hadn’t been leaked to the BBC? A reluctant UN in New York had to publish the document, but chose to do so without its powerful executive summary that set the conflict in the context of post-9/11 global attitudes to terrorism that tragically skewed the reporting of the bloodshed. Internal communications show senior UN officials struggling to portray the proscribed terrorist group, the Tamil Tigers, as the ones primarily to blame for the killings.

But the latest UN report documents how UN staff members were in possession of reliable information that showed that the Sri Lankan government was responsible for the majority of deaths.

And that two-thirds of the killings were inside safe zones unilaterally declared by the Sri Lankan government purportedly to protect civilians. This was information senior UN managers decided not to share with diplomats when they briefed them.

Four months before the end of the war, the UN received incontrovertible evidence of war crimes committed by the Sri Lankan government from its own staff. Two international employees, including a former military officer, were caught up in an attack on a civilian safe zone while delivering aid. At 3 a.m. on Jan. 24, 2009, the UN team reported to headquarters that “the decapitated body of the 18-year-old daughter we had spoken to earlier in the evening landed at the entrance to our bunker. One WFP [World Food Program] driver was hit in the back of the head with shrapnel. … The scene at first light was devastating; within 20m of our location lay 7 dead & 15 seriously injured. 1 dead infant was in a tree under which the family had sheltered and the 2nd decapitated infant was hanging from the wire perimeter fence.”

They continued to come under a virtually uninterrupted barrage of artillery fire from government lines. In the morning, they had to clear human body parts off their vehicle.

Surprisingly, the UN did not allow its staff to tell the world what they’d seen.

Instead, the resident co-ordinator wrote privately to Sri Lanka’s Ministry of Foreign Affairs, saying all the shelling came from the government lines and urging them to protect civilians, but adding:

“The LTTE [Liberation Tigers of Tamil Eelam] bears responsibility for this as they have not permitted civilians the choice of departing and likely have fired from areas in the no-fire zone.”

That January food convoy proved to be the last time the UN went into the war zone. Some brave lower-level staff members set up a task force in Colombo to collect and verify casualty data.

Information was coming out by telephone from Tamil doctors, priests, NGO workers and local UN employees held hostage by the Tigers. The UN team compiled casualty lists but only verified a death if there were three independent sources. In this way, the UN confirmed nearly 8,000 civilian deaths before it became impossible in late April for people under heavy fire to leave their bunkers to verify information. The UN’s report now says it was a rigorous methodology following best practice.
But that wasn’t what senior UN officials said at the time.

When the UN High Commissioner for Human Rights, Navanethm Pillay, struggled to use the UN’s casualty figures to speak out about potential war crimes by the Sri Lankan government, internal UN communications reveal that Mr. Ban’s then chef de cabinet, Vijay Nambiar, implored her to tone down her statement.

Other UN diplomats are cited in the report trying to wriggle out of accepting the casualty data their own staff prepared, undermining it by questioning its reliability. Never mind that these figures were much more carefully checked than death tolls cited for Syria or Afghanistan. Or, for that matter, the general death toll the UN always cites in official documents of 100,000 killed in Sri Lanka during the whole course of the war.

The report’s executive summary that was removed before publication rightly said: “Some have argued many deaths could have been averted had the Security Council and the Secretariat, backed by the UN country team, spoken out loudly early on, notably by publicizing casualty numbers.”

As the author of a book of survivors’ stories from the last phase of the war in Sri Lanka, I found this dry bureaucratic UN report surprisingly upsetting. I have sat through days of interviews with people who struggled to tell me the full horror of what they’d experienced in those months. A Catholic nun whispered her story for hours as if the evil she’d confronted couldn’t be spoken out loud. A farmer’s wife now in Ireland shook so severely that her chair and the curtain behind her vibrated as she told how, during lulls in the shelling, they’d climbed out of the ditches in which they hid and buried their neighbours’ body parts. Worse still was watching a mother sob herself to exhaustion after she told me how she feared her teenaged daughter had been raped and killed after surrendering to the army. She said she wished the girl had been blown up in front of her because at least she’d have known what happened.

These stories are repeated thousands of times. Another UN report said a death toll of 40,000 in just five months was credible; this inquiry says it could even be 70,000. The suffering during the last phase of Sri Lanka’s war was unprecedented, even by the cruel standards of decades of conflict in that country. The UN Secretary-General needs to appoint an international war-crimes investigation to set the record straight – and, for that, he needs the backing of member states.

Frances Harrison, a former BBC correspondent in Sri Lanka, is the author of Still Counting the Dead: Survivors of Sri Lanka’s Hidden War (published in Canada by House of Anansi).
Posted by nickglais on 11/23/2012 04:29:00 AM

Forceful recruitment of 109 girls by Srilankan army has all characteristics of Japanese "300000 or so comfort women" history.

Before more women being kidnapped as comfort women for the Srilankan military relevant International organisations ,

particularly UN must act now on this matter .

Are we waiting to say sorry for Japanese "comfort women" saga to repeated in Srilanka.