20 Theses against green capitalism by Tadzio Mueller and Alexis Passadakis 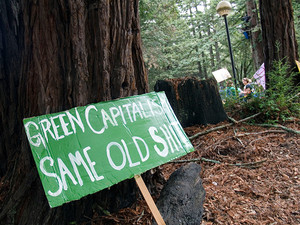 No to false solutions! Climate Justice Now!
by Tadzio Mueller and Alexis Passadakis

1. The current world economic crisis marks the end of the neoliberalphase of capitalism.‘Business as usual’ (financialisation, deregulation, privatisation…) is thus no longer an option: new spaces of accumulation and types of political regulation will need to be found by governments and corporations to keep capitalism going.

2. Alongside the economic and political as well as energy crises, there is another crisis rocking the world: the biocrisis, the result of a suicidal mismatch between the ecological life support system that guarantees our collective human survival and capital’s need for constant growth.

3. This biocrisis is an immense danger to our collective survival, but like all crises it also presents us, social movements, with a historic opportunity: to really go for capitalism’s exposed jugular, its need for unceasing, destructive, insane growth.

4. Of the proposals that have emerged from global elites, the only one that promises to address all these crises is the ‘Green New Deal’. This is not the cuddly green capitalism 1.0 of organic agriculture ( DCS View on Agro Industrial Agriculture )and D.I.Y. windmills, but a proposal for a new ’green’ phase of capitalism that seeks to generate profits from the piecemeal ecological modernisation of certain key areas of production (cars, energy, etc.)

5. Green capitalism 2.0 cannot solve the biocrisis (climate change and other ecological problems such as the dangerous reduction of biodiversity), but rather tries to profit from it. It therefore does not fundamentally alter the collision course on which any market-driven economy sets humanity with the biosphere.

6. This isn’t the 1930s. Then, under the pressure of powerful social movements, the old ‘New Deal’ redistributed power and wealth downwards. The ‘New New’ and ‘Green New Deal’ discussed by Obama, green parties all around the world, and even some multinationals is more about welfare for corporations than for people.

7. Green Capitalism won’t challenge the power of those who actually produce most greenhouse gases: the energy companies, airlines and carmakers, industrial agriculture, but will simply shower them with more money to help maintain their profit rates by making small ecological changes that will be too little, too late.

8. Because globally, working people have lost their power to bargain and demand rights and decent wages, in a green capitalist setup, wages will probably stagnate or even decline to offset the rising costs of ‘ecological modernisation’.

9. The ‘green capitalist state’ will be an authoritarian one. Justified by the threat of ecological crisis it will ‘manage’ the social unrest that will necessarily grow from the impoverishment that lies in the wake of rising cost of living (food, energy, etc.) and falling wages.

10. In green capitalism, the poor will have to be excluded from consumption, pushed to the margins, while the wealthy will get to ‘offset’ their continued environmentally destructive behaviour, shopping and saving the planet at the same time.

11. An authoritarian state, massive class inequalities, welfare given to corporations: from the point of view of social and ecological emancipation, green capitalism will be a disaster that we can never recover from. Today, we have a chance to get beyond the suicidal madness of constant growth.
Tomorrow, by the time we’ve all gotten used to the new green regime, that chance may be gone.

12. In green capitalism, there is a danger that established, mainstream environmental groups will come to play the role that trade unions played in the Fordist era: acting as safety valves to make sure that demands for social change, that our collective rage remain within the boundaries set by the needs of capital and governments.

13. Albert Einstein defined ‘insanity’ as “doing the same thing over and over again and expecting different results.” In the past decade, in spite of Kyoto, not only has the concentration of greenhouse gases in the atmosphere increased – so, too, has the rate of increase. Do we simply want more of the same? Wouldn’t that be insane?

14. International climate agreements promote false solutions that are often more about energy security than climate change. Far from solving the crisis, emissions trading, CMD, joint implementation, offsets and soon, all provide a political shield for the continued production of greenhouse gases with impunity.

15. For many communities in the global South, these false solutions (agrofuels, ‘green deserts’, CDM-projects) are by now often a greater threat than climate change itself.

16. Real solutions to the climate crisis won’t be dreamt up by governments or corporations. They can only emerge from below, from globally networked social movements for climate justice.

17. Such solutions include: no to free trade, no to privatisation, no to flexible mechanisms. Yes to food sovereignty, yes to degrowth, yes to radical democracy and to leaving the resources in the ground.

18. As an emerging global climate justice movement, we must fight two enemies: on one hand climate change and the fossilistic capitalism that causes it, and on the other, an emergent green capitalism that won’t stop it, but will limit our ability to do so.

19. Of course, climate change and free trade aren’t the same thing, but: the Copenhagen-protocol will be a central regulatory instance of green capitalism just as the WTO was central to neoliberal capitalism. So how to relate to it? The Danish group KlimaX argues: A good deal is better than no deal – but no deal is way better than a bad one.

20. The chance that governments will come up with a ‘good deal’ in Copenhagen is slim to none. Our aim must therefore be to demand agreement on real solutions. Failing that: to forget Kyoto, and shut down Copenhagen! (whatever the tactic)

By Tadzio Mueller and Alexis Passadakis (12/2008). Alexis is a member of attac Germany’s coordinating council, Tadzio a part of the Turbulence editorial collective (www.turbulence.org.uk).

They are both active in the emerging climate justice movement, and can be reached at againstgreencapitalism (at) googlemail.com