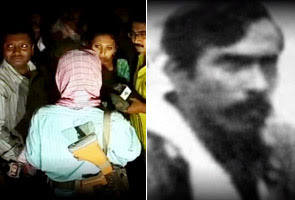 
We strongly condemn the cold-blooded murder and planned assassination of Kishanji alias Mallojula Koteswara Rao, Politburo Member of CPI (Maoist) in Burishol forest area, Paschim Midnapore District, Jangalmahal, West Bengal on 24 November 2011. At the time of this murder Kishanji was dealing with the process of peace talks through the interlocutors appointed by the Chief Minister of West Bengal Ms. Mamata Banerjee. Such a heinous crime should be condemned by all justice loving people.
According CPI (Maoist) statement issued to the media on today, Kishanji was arrested and tortured and then brutally killed. This murder looks much similar to that of Azad’s in July 2010, when Azad was brutally tortured and killed while he was dealing with the Union Government’s offer of peace talks through union Home Ministry appointed interlocutor.
In these circumstances, the Joint Forces’ story of a fierce gun battle in Burishol forest of Paschim Midnapore district comes out to be a concocted one. It is significant that the mother of Kishanji, Ms. Madhuramma while maintaining it is a fake encounter has also demanded a judicial enquiry. Under the circumstances, we demand:
1. The fake encounter killing of Kishanji should be investigated by a Judicial Enquiry Committee of a sitting or retired judge of Supreme Court.
2. Immediately register a case of Murder against the police, and paramilitary personnel who have claimed to have killed Koteswara Rao alias Kishanji, Politburo member, CPI (Maoist) in Burishol Forest area, Paschim Midnapore District, Jangalmahal, West Bengal taken place on 24-11-2011.
3. All those who are the suspects and involved in this coldblooded murder should temporarily be removed from the office till the Judicial Enquiry is completed.
4. Kishanji’s body should be airlifted to Hyderabad and handed over to his mother after proper post-mortem being conducted by the designated team of doctors and forensic experts not below the rank of civil surgeons.
5. Meanwhile, Kishanji’s body should be preserved with appropriate embalming.
B D Sharma
Former National Commissioner for Scheduled Castes and Tribes
G N Saibaba
Deputy Secretary
Revolutionary Democratic Front (RDF)
Posted by nickglais on 11/25/2011 11:27:00 AM

Kishan Ji has fought for the rights of the downtrodden people who have
been harassed and whose lives have been harmed and abused by the
ruling class.

It is very unfortunate that Kishan Ji has been murdered, In India the
rights of its citizens are being abused by the very people/Government
elected by them.