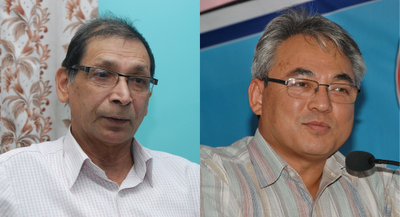 (The revolutionary leaders of UCPN (Maoist) Vice Chairman comrade Mohan Baidya’ Kiran’ and Gernral Secretary comrade Ram Baghadur Thapa’ Badal’ in a joint press statement on Tuesday, have urged the People’s Libration Army of Nepal cantoned in various cantonments across the country, to stay away from the army integration process. They have urged to boycott the regrouping process which is due to start from Sunday, November 19.)
Editorial from Next Front Nepal

It is known to all that in a press conference organized on 1st November 2011,we had publicized our opinion about ’7pt deal’–a deal which was done against the party decision and the sentiment of the people. Specially, the agreement related to army integration is against peace and is extremely disrespectful to the People’s Liberation Army. So we call upon all PLA commanders and PLA members to boycott such process.
Posted by nickglais on 11/15/2011 10:55:00 AM