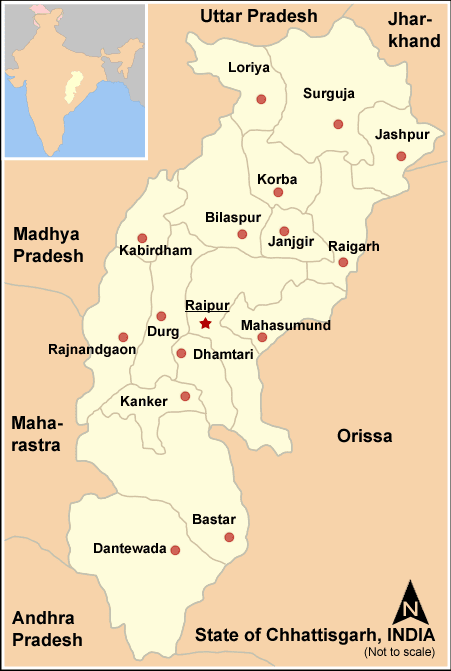 Press release on the fact finding report of the Chintalnar massacre, 11 to 16 March 2011, Chhattisgarh

A 13 member fact finding team visited the Chintalnar Area of Dantewada district in Chhattisgarh to probe into the incidents of atrocities perpetrated by the Salwa Judum and the state forces on the adivasis living in this area between 11th and 16th of March 2011.

The incidents was propagated by the police as an ‘encounter’ between the CRPF and Maoists in which according to the police 36 Maoists have been killed while 3 SPOs [Special Police Officer, member of paramilitary] got killed and 9 other SPOs were injured. The police had celebrated this incident in the media to prove their dominance over the Maoists in this region. However, media persons and fact finding teams were restricted to go inside on the pretext that it is ‘war zone’ and the so-called war between the state and the Maoists are still going on hence it is risky for any outsider to go inside.

The fact finding team which comprised of various civil and democratic rights activists and other individuals, went inside this area on the 26th and 27th of March 2011. We spoke extensively to the villagers and the victims of the incident. We were shocked to find that once again the police version propagated by the state is completely hoax and far from reality.

On 11 March a huge contingent of 300 paramilitary and Salwa Judum forces attacked Morupally Village in the Chintalnar area after they got a prior information that a big meeting of adivasis will be held there. In Morupally village they burnt 33 houses, raped two women: Ilme Mude and Marvi Bimey. They also brutally assaulted another woman Lakke along with her father Marvi Bhima. Marvi Sula, an old adivasi was also killed.

From Morapally, the forces advanced towards Timmapuram, on 13 March, after ravaging Morapally village. On the way, the next day Maoists came and tried to stop them. In the armed clash, that lasted for two hours, one villager Bhima alias Sudarshan was killed while two other got injured. 3 SPOs were killed while 9 others got injuries, of which one died later.

The CRPF and Salwa Judum SPOs were forced to retreat after the prolonged encounter. They came to Timmapuram village and took shelter there. They made bunkers inside the village to quell probable Maoist attack. Before leaving the village they set fire on 55 houses. Bursey Bhima was picked up by these forces from Pulampad village on their way to Timmapuram. After setting the villages on fire, they hacked Bursey Bhima to death with an axe. This is probably due to the fact that Bhima was an eye-witness of their entire carnage. From Timmapuram on their way back, they entered Tadmetla village and it became their next target. In Tadmetla, they burnt a total of 207 houses. These houses were simply gutted to ashes. They raped Marvi Jogi and beat her till she lost consciousness. When she came back to senses, she found her cash and jewellery worth Rs. 12,000 missing. Around 20-25 other people in Tadmetla were beaten up including children as young as 12 years old. Marvi Anda and Marvi Ayita of this village were picked up by police and are still missing. They have not been produced even in police station.

People of Timmapuram have identified several Salwa Judum members who led this carnage. They saw, Mantam Bhima alias Ramesh (from Jannaguda Village), Telem Anda (of Lekapor Village), Wanjan Peva ( of Charpan Village), Dasaru (from Villampally Village), Mara (of Monipally Village), Ramlal (of Bodikal Village), Keche Nanda (of Korapad), Kartam Dula alias Surya (of Misman Village), an SPO and one woman SPO Payake from Timmapuram itself. This clearly shows that the Salwa Judum is active and functioning like always. The state’s branding of them as ‘Koya Commandos’ is bogus. Despite the Supreme Court directive to disband Salwa Judum it is fully functional and actively promoted and sponsored by the state.

This one-sided ruthless attack by the state forces and Salwa Judum on innocent unarmed adivasis were propagated in the media by the police as ‘ongoing encounter with the Maoists’. The rampage of the salwa judum and state forces continued for almost five days. Two people were murdered cruelly, while 3 women were raped. Almost three hundred homes were set on fire and completely gutted down. They looted everything the adivasi people had including domestic animals like goats, cows, chicken and pigs along with their money, jewelleries and other belongings. More than fifty people have been grievously injured that includes children as young as 12 years old and women.

We spoke to the affected villagers like the rape victim from Tarmetla village Marvi Joga. No case has still been registered against anyone and not even a medical test has been done. Two people from Tarmetla Muchaki Anda and Muchaki Ayita have gone missing and villagers claimed they have been taken by the forces but are yet to be produced. These rampages were done with full consent and active support of the state. In the middle of these unilateral atrocities, the state air-dropped rations and other food supply to the forces while taking away the dead and the injured.

On 24th March, the SDM had visited these villages with some relief material. But even after he directly spoke to the villagers and saw the evidences of the atrocities, no case has been registered against anybody. Even now instead of taking action against the perpetrators of these atrocities, the state is still stopping civil rights activists and individuals to visit the area. People in Morupally and Timmapuram are living in utter dire condition. People in these two villages have received no relief from the state. They said that they have got some interim relief from the Maoists. Many of them are staying under trees. After the fact finding team left, one local newspaper reported of six starvation deaths in Morupally village which needs to be confirmed. We have been inside these areas for two days, only to see that there was no ‘encounter’ with the Maoists as claimed by the police, which is nothing but a myth propagated by the state to justify these atrocities.

The attack by the state forces and the Salwa Judum was heinous and the attack on the innocent adivasis has been done persistently by the state and its mercenaries in the name of ‘Operation Green Hunt’. These villages were particularly targeted as they have done alternative development works like digging ponds, distributing lands among the landless, making irrigation facilities which the state has failed to provide in all these decades. As we saw these areas are still the most underdeveloped regions of the country and all that the state has done is to violate the rights of autonomy of the adivasis, denied them of their basic means of livelihood and life and now they are perpetrating such monstrous atrocities by Salwa Judum and paramilitary forces.

We condemn these outrageous acts of state violence and demand:

• Registering the cases of rape, murder, atrocities and kidnap against the CRPF and Salwa Judum
• Exemplary punishment for the perpetrators of the crime.
• Immediate providing of medical facilities to the injured and medical tests of the rape victims
• Compensation of the people according to their specific losses
• Allowing more civil rights organisation and media persons to go inside the area.
• As per direction of the Supreme Court the salwa judum must be disbanded immediately and functioning of the Salwa Judum in the name of ‘Koya Commandos’ must be stopped.
• Operation Green Hunt must be stopped immediately

Members of the fact finding team: